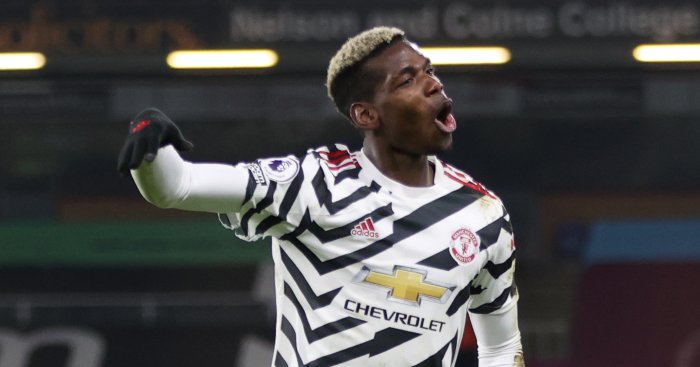 Paul Pogba was little more than ‘competent’ against Burnley and it will take more than good form to win over a media obsessed with his hair.

‘OVER the top celebrations? Chance would be a fine thing. On the day that football launched a Covid crackdown Arsenal and Palace turned the Emirates into a totally sterile zone’ – Mark Irwin, The Sun.

‘At least Arsenal did their best to avoid hugging. In fact, there was never any chance of a goal celebration for the Gunners socially distanced or otherwise at the Emirates’ – John Cross, Daily Mirror.

‘You can’t celebrate if you don’t score; perhaps Arsenal and Crystal Palace are onto something’ – Sami Mokbel, Daily Mail.

…and it really does become increasingly apparent that a great deal of football journalism is just an exam where you glance at everyone else’s answers and change them ever so slightly in the hope no-one notices.

Season in the sun
As Irwin writes elsewhere in his piece from the Emirates:

‘Mikel Arteta has now been in charge of Arsenal for 38 Premier League games, the equivalent of a full season.

‘They were 11th in the table when he took over from interim boss Freddie Ljungberg and they are still 11th after a year under the new regime.’

Well yes but if you’re going to do that you should probably mention that they are 8th in a Premier League table since his appointment. Still not brilliant but also a fairer reflection of ‘the equivalent of a full season’ that you yourself brought up.

Mind you, well done for going an entire match report without bringing up Mesut Ozil. Proud of you.

Tier free
Elsewhere in The Sun, Jake Lambourne knows who to blame for that draw.

‘ARSENAL fans feared their chances of beating Crystal Palace were already over when Kieran Tierney was left out of the matchday squad.

‘And they were right.’

‘Left out’ is one way of saying he was injured.

‘Mikel Arteta’s decision to rest the Scot backfired as the Gunners looked toothless in attack during the 0-0 draw.’

He probably will be able to put his feet up while undergoing an MRI scan to discover the true extent of his injury, but in no way was Tierney treated to a ‘rest’ on Thursday. Arteta would have played him if he could.

‘With Arsenal knowing they dropped two points on Thursday, Arteta will now be desperate to secure the three points when they host Newcastle on Monday.

‘And you can be sure the Spaniard won’t make the same mistake twice in leaving Tierney out of the side.’

Mediawatch would not be at all surprised if Arteta repeats the same ‘mistake’ of not playing an injured player.

Hit the road, knack
‘Palace, meanwhile, were decent on the counter attack and their knack of upsetting the big boys struck again if we can still consider Arsenal among the elite’ – John Cross, Daily Mirror.

Their 7-0 loss at home to Liverpool was less than a month ago.

Les Compétent
Over at the Daily Star, Jeremy Cross is far more interested in adding asterisks to Paul Pogba’s recent upturn in form.

‘If some people are to be believed, Paul Pogba has morphed into Lionel Messi.’

Quite the impressive straw man you have constructed there. What a joy it will be to see you summarily dismantle words that literally no-one has actually said or typed recently.

‘The breaking news from Turf Moor earlier this week was that Pogba had been world class, that he dominated his opponents and both ran and won the game for Manchester United with a moment of magic to fire them to the top of the Premier League table.

‘All of the above is part fact, part fiction. Pogba was decent in midfield alongside Nemanja Matic and did win the match with a scuffed and deflected strike replays have gone on to prove might just be the most overrated goal of recent times.’

Mediawatch must have missed the thousands of people comparing it to Zinedine Zidane in the 2002 Champions League final. ‘The most overrated goal of recent times’ is a magnificent claim for a strike most said was decent at best and mainly down to the similarly maligned Marcus Rashford.

And he was better than ‘decent’ but you already know that. At the very least he was the game’s best player, which is quite important.

‘Before people start complaining that Pogba is now being criticised just because of who he is, think again.’

Because the weird person is not the author of a critical article being written of a player in very good form for the team top of the Premier League table, but those who might think that it being written in the first place is weird.

‘The mere fact a competent performance at Burnley (16th in the table and four points above the relegation zone) got so much attention speaks volumes for the on-going Pogba conundrum.

You can use snide brackets all you want (and Mediawatch really is a pro when it comes to that) but the only volumes being spoken here are of your apparent dislike of a footballer for no real reason other than he cost his current club a lot of money and hasn’t been all that consistent since.

‘He’s been about as consistent as his haircuts…’

‘The truth is United have scaled the summit of the Premier League once again with him, not because of him.’

Is anyone suggesting otherwise? Every recent interview he has given is full of mentions of “we” and “us”, not “me” and “I”.

‘The 27-year-old is no longer the centrepiece of Ole Gunnar Solskjaer’s creation. This tag belongs to Bruno Fernandes, the leading man who has relegated Pogba to nothing more substantial than a cameo role alongside him.’

The ‘leading man’ who didn’t turn up against Burnley (16th in the table and four points above the relegation zone) and needed Pogba’s ‘competence’ to win? That is, of course, facetious as Fernandes is and has been brilliant. But if you genuinely think Pogba is being nothing more than ‘competent’ in ‘a cameo role’ then this sport isn’t for you.

Even the ‘credit’ Cross affords the Frenchman is qualified: ‘for knuckling down to display the right attitude and work ethic in recent months,’ but only after Ole Gunnar Solskjaer ‘refused to indulge him’.

So Pogba has been decent yet it’s still just down to the manager.

The overall idea, that Pogba should be judged more on games against Liverpool this weekend and not Burnley in midweek, is fair enough. The entire article and its closing paragraph is as lazy as Cross seems to think Pogba is.

‘The time for United’s enigma and problem child to stand up and be counted has come.’

A reminder that this ‘enigma’ and ‘problem child’ scored the only goal in a 1-0 win that sent Manchester United top of the league a matter of days ago. You really wouldn’t know reading that.

Just wait until The Sun website discovers Premier League managers were 14 once.

The best bit? The identity of the Liverpool and Everton ‘stars’ who ‘are actually friends’: John Arne Riise and Tim Cahill. Erm…

Recommended reading of the day
Rory Smith on Bruno Fernandes.