Ole Gunnar Solskjaer won one leg of a losing League Cup semi-final and 'knows the club'. He stays. 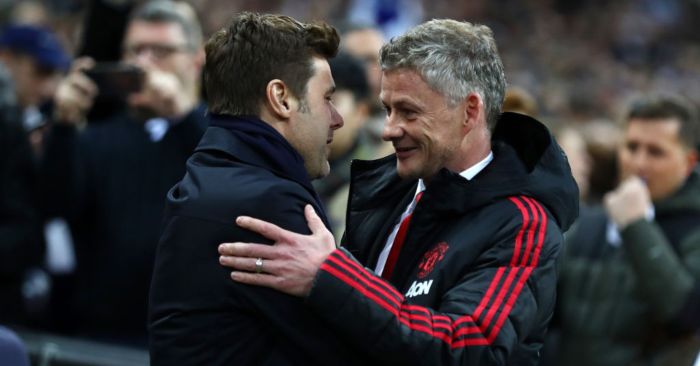 Ole Gunnar Solskjaer won one leg of a losing League Cup semi-final and ‘knows’ Man United. It’s clear: he must stay as manager.

Soft play
Mediawatch enjoys the idea of Neil Custis using his platform as a journalist for the nation’s best-selling newspaper basically just to tell Gabriel Agbonlahor he is wrong. Some people might have quickly chucked a rebuttal out on social media but Custis reserves that only for complaining about airports and not being nominated for awards.

After all, why write a quick tweet when you can curl out 647 whole words about how Ole Gunnar Solskjaer is not at all “too soft”?

‘IT has taken just one game but already there are calls for Ole Gunnar Solskjaer’s head.’

Well no, it’s taken close to two years and a record akin to the sacked Louis van Gaal – P91 W49 D20 L22 to the Dutchman’s P103 W54 D25 L24 – for many to suggest Man United could perhaps do better than employing a manager largely on the basis of their playing career.

‘Take for instance yesterday morning on TalkSport and ex-Aston Villa forward Gabriel Agbonlahor who said that he was 100 per cent sure Mauricio Pochettino could do a better job.’

Pochettino took Tottenham from sixth to third in two years with a net spend (sorry) of -£13.1m. Solskjaer has taken Man United from and to the same position in roughly the same amount of time with a net spend of about £150m.

Is it really so outlandish to suggest someone with far more extensive Premier League and European experience, who has proven himself more capable of getting teams to play a defined style, would ‘do a better job’? Pochettino reached a Champions League final with no new signings in 18 months; Solskjaer is being absolved of blame for losing at home to Crystal Palace because his expensively-assembled squad has only been adorned with a £35m midfielder so far this summer.

‘Pochettino by the way won seven of his last 25 games in charge of Tottenham.’

And 54.27% of his 293 games in six years overall. Which is better than Solskjaer (53.85%) has managed at an elite club with more stable foundations and over a shorter period. What’s your point?

‘Agbonlahor described Solskjaer as “too soft”.

‘Now, because the baby-faced assassin puts on a positive smiley front, be under no misconception that this guy is soft.’

OK. But can we continue with the perception that he isn’t quite good enough?

Apparently not, because Solskjaer ‘knows when to turn on the hairdryer’. Does he know how to out-coach Roy Hodgson at home, though?

‘He could not countenance David De Gea chucking them in at Wembley in the FA Cup semi-final.’

A reminder that Man United lost that game 3-1 with their goal an 85th-minute consolation penalty. ‘He could not countenance’ a goalkeeping mistake but to blame only that for defeat would be a bit silly.

‘We know Manchester City are way ahead but still they beat them in one of the two legs of the League Cup.’

When Man United’s manager is being painted as a success for winning one leg of a cup semi-final to lose on aggregate after getting thrashed in the first, you know there’s a problem.

‘Solskjaer knows the club, he knows the fans, he is part of the DNA and, again, he is heading in the right direction.’

Nope. Not falling for that one again. Next.

‘He was right to criticise Saturday’s performance but also correct to point out the mitigating factors.

‘It had been only 34 days from that defeat to Sevilla in Cologone and the meeting with Crystal Palace.

‘In that time his squad had trained together for a week and played one friendly.

‘Palace meanwhile had played four pre-season friendlies, had an opening day win against Southampton and a goalless EFL game with Bournemouth.’

That is all well and good but it was Crystal Palace at Old Trafford. And you have just used them drawing 0-0 with Bournemouth in a League Cup game as a defence for Man United losing to them. What are you actually doing?

‘The club is also sick of having the mick taken out of them when they go in for a player and suddenly his value rockets way beyond his worth, while there are no other club’s bidding.’

There is not a violin small enough in the world. And what is that apostrophe doing there?

‘Still, Ole is at the wheel and needs to remain there.’

Yes, because of the knowing the club and the winning one leg of a losing League Cup semi-final effort and the solitary week of training they had to prepare to host Crystal Palace (who were playing their third competitive game in seven days and thus had even shorter to focus on that match). He absolutely ‘needs’ to stay.

‘It may not be a smooth path, but he is going in the right direction. One game, one defeat, does not change that.’

Agreed. After all, it’s only ever two defeats that could see Solskjaer lose his job, right?

Oh no, no, you can’t disguise
It’s little wonder that Custis does not consider Solskjaer to be “too soft” considering the rather public chastising the Norwegian reserved for his “made up, blatant lies” last December.

Once burned, and all that…

‘Jadon Sancho at 20 is probably worth £70million, not £110million and the club are right not to pay this silly money.’

Jadon Sancho at 20 is ‘probably worth’ whatever Borussia Dortmund, to whom he is contracted for three more years as an important first-team player, say he is. It is Man United’s prerogative to ‘pay this silly money’ or target alternatives. They have done neither.

But that will not stop The Sun pretending there were any hopes left of this move actually happening to extinguish.

A Borussia Dortmund employee pointing out that Sancho “is our player, and he will stay” is not ‘a new blow’. It is precisely what they have been saying since August 10, when the deadline you pretended didn’t matter expired. Give. It. Up.

Misjudged use of an exclamation mark of the day
Writes Graeme Bryce in The Sun:

‘Remember how we laughed when Oliver Norwood’s free kick was fumbled over the line by Villa ‘keeper Orjan Nyland and clearly crossed the line for a goal.

‘Until Michael Oliver put his trust in tech and was made to look a mug as his watch failed to buzz and the system failed him.

…and the runner-up
Writes Graeme Bryce in his very next line in The Sun:

‘This time tech worked – although Blades skipper Egan might beg to differ!’

In third place
Writes Graeme Bryce a few paragraphs later for The Sun:

‘It’s rumoured the Scotland international is so quick he can flick his bedroom light switch and be in bed before it’s dark!’

…and taking fourth
Writes Graeme Bryce even further down for The Sun:

‘Lundstram stepped up to test Villa new boy Martinez – and discovered he is an upgrade on Nyland!’

This is a Premier League match report, not a jovial company-wide email sent by the boss on a Friday afternoon, pal.

Sky is the limit
You might have seen Steve Parish call out Sky Sports on Twitter on Monday. You might not have seen one of the since-deleted updates on the latter’s live transfer blog:

Top Journalism from Sky Sports this morning. Roy Hodgson left Liverpool in 2011 when Rhian Brewster was, yep you guessed it.. 11 years old 😂😂 pic.twitter.com/a46nmX6zKf

Hodgson left Liverpool in 2011. Brewster was not only 11, but also still in Chelsea’s academy. Great work.

Recommended reading of the day
David Squires on Gareth Bale.