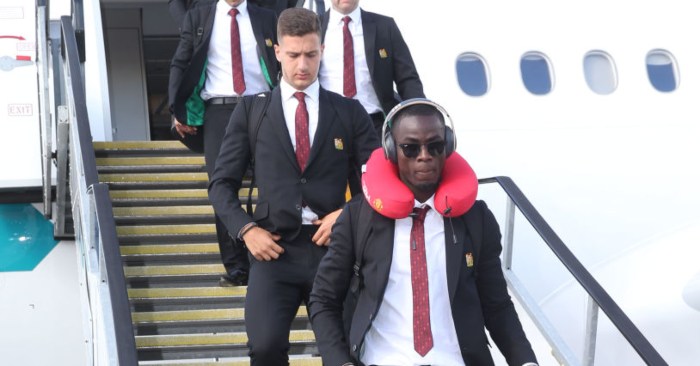 Money matters
On Friday we were told by the MEP that ‘Manchester United might have found a new way to save millions in the transfer market’ (basically ‘making the kids better’).

Well the thrift drive continues as on Monday the MEP tells us that ‘Eric Bailly could save Manchester United millions in summer transfer market’.

So bloody nice of them to help out a club with an annual revenue of £590m. Maybe they could suggest putting £2 coins in a jar; it’s surprising how quickly you will have enough for a nice little weekend away.

No-brainer
Mediawatch quite enjoyed The Sun’s back page referring to Paul Pogba and Romelu Lukaku as ‘glum and glummer’, but we laughed out loud at Neil Custis writing this:

‘But stars want to quit Old Trafford and Pogba’s agent Mino Raiola made it clear the Frenchman has no desire to play for the club again.

‘Even at noon yesterday it was still unclear if Pogba would go to Australia.’

Unclear to you, Neil. We suspect Paul Pogba, Manchester United and anybody else deemed important did actually know that a man paid by the club was going to turn up to work for the club.

Just in: You’re really not important.

What becomes of the broken squad?
Somebody might need to go and check that Neil Custis is okay; the man is in the depths of despair about this current iteration of Manchester United.

‘Right now the biggest task for United is not bridging the gap between themselves and Manchester City and Liverpool.

‘The worry is keeping the likes of Wolves and Leicester at bay.

‘They are heading for mid table, not top of the table…’

Are they though? Even after Manchester United’s late season capitulation, only Manchester City, Liverpool and Arsenal earned more points in 2019. Arsenal have since signed nobody and lost Aaron Ramsey so the idea that United will drop way below them into mid-table seems ludicrously apocalyptic.

‘Solskjaer is taking a squad of players away that is broken.’

‘Four of the biggest names are clearly disaffected.’

‘Pogba and striker Romelu Lukaku want out, keeper David De Gea is still to sign a new deal, and as for £505,000-a-week winger Alexis Sanchez, where do you start?’

Perhaps with the fact that Alexis Sanchez is not actually going to Australia so is not part of this whole ‘broken squad’ thing? Or perhaps with the idea that the only reason Romelu Lukaku ‘wants out’ is because Ole Gunnar Solskjaer has decided that a man who has scored 42 goals in two seasons is not really good enough to be first choice at Manchester United?

There is something very comforting about Custis eventually blaming this state of affairs on United ‘not appreciating just how good’ they had it with Jose Mourinho. Because of course no f***er was ‘disaffected’ when he was in charge.

Headphones? He was wearing headphones!
You know what happens when people board a flight; they then arrive at their destination. And in 2019 that is news. Which is the very best illustration of the maxim that something is not really newsworthy if the opposite is far more interesting. So we get this…

‘Something on your mind, Paul? Pogba and his United team-mates touch down in Perth as their wantaway star man slips into team hotel with his headphones on’ – MailOnline.

And that is the jackpot. Not only have they ‘touched down’ but there is a man wearing headphones, which basically makes him evil. And how about that use of the word ‘slips’, like he tip-toed in during the dead of night like a man who has something to hide, rather than just walking in the front door with everybody else.

Spoiler: He walked in the front door with everybody else.

Men in blazers
Somebody always has to take it too far. So we head reluctantly to the Daily Express website to find that they have seen lots of photos of this broken Manchester United squad arriving in Australia and decided that this is the headline:

As best as we can discern these are:

1) Paul Pogba is a ‘maverick’ because he ‘kept his sunglasses and headphones on, while he was still without his club blazer and kept things casual with a pair of white trainers’.

2) Aaron Wan-Bissaka is not a maverick because he ‘was looking smart in his club blazer and suit shoes’. What a nice boy. Apparently this means he ‘is obviously keen to make a good impression’. Well done Aaron.

3) Eric Bailly ‘was seen disembarking the plane looking relaxed’. Hmmm. He appears to be wearing headphones and sunglasses, and yet Pogba is a ‘maverick’ and ‘stony-faced’ and Bailly is ‘relaxed’. Maybe you can only ‘relax’ in a blazer. Now Mediawatch is confused.

4) ‘Solskjaer opts for youth.’ Hmm. Pretty sure that was clear in the squad announcement. Is somebody regretting their commitment to ‘seeing’ five things?

Admission of the day
‘LUCY BRONZE was named the second best player at the World Cup – but admitted the Silver Ball was not the prize she wanted’ – The Sun.