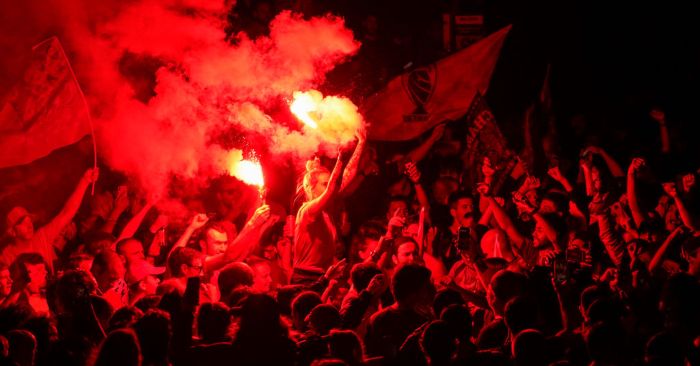 Oh dear, oh dear
‘I still feel, the way it stands today, that they will not be as dynamic as they were last season. There will be a certain amount of fatigue with the front three, so Liverpool will finish second’ – Charlie Nicholas, Sky Sports.

Oh dear, oh dear, oh dear
‘I am going for the hat-trick of Manchester City title wins. I think it may be a little more comfortable than last season though. I think Liverpool got quite fortunate with a lack of injuries last season and I think the squad that Manchester City have got is just so much stronger than Liverpool’s in terms of the depth’ – Matt Le Tissier, Sky Sports.

Oh dear et al.
‘City remain by far the best team and squad in the Premier League and will win the title by a good distance this coming season’ – Neil Custis, The Sun.

Oh dear and so on…
‘Another two-horse race on the cards and another title for Manchester City at the end of it. Quite simply Pep Guardiola has a better and deeper squad than Liverpool. Why, then, should the outcome be any different?’ – Phil Thomas, The Sun.

And so forth
‘They are so strong and with Pep Guardiola at the helm there will no let up’ – Jamie Carragher, Daily Telegraph.

And one last time

‘I cannot see past Man City. Liverpool needed to do a little something and they really did bugger all.’

‘City are becoming only the fifth side to ever win three on the bounce.’

‘Sorry, but it’s Manchester City. Too many doubts about everyone other than Liverpool, and their front three playing during the summer doesn’t help. City win the league by seven points.’

‘I’d like to pretend it won’t be City, but it will be City. And by a big margin this year, as I can’t see Liverpool getting within 10 points of last season’s tally but can very much see City doing so, especially as there looks to be about 16 sides they can beat with one leg tied behind their head.’

Mayor dreams come true
Remember when Joe Anderson, mayor of Liverpool, aired his “concerns” about how the club’s fans might celebrate winning the title at Anfield during a global pandemic and state-enforced lockdown?

“I think it would be really difficult for the police to keep people apart and maintain social distancing if they were going to celebrate outside Anfield, it would be farcical,” he said. And it turns out, well…

Thousands of Liverpool fans have spent the night celebrating outside Anfield and in the city centre after the club won their first Premier League title.

Ah. That’s pretty awkward. Not least because Liverpool themselves released a statement saying they were “aware of and disappointed by” the suggestion that social distancing measures would not be adhered to in such an event.

They were not alone. A slew of writers condemned Anderson’s views, from Neil Atkinson of The Anfield Wrap…

…to Dominic King of the Daily Mail. He described the idea that supporters would congregate to celebrate Liverpool winning the title in a behind-closed-doors game at Anfield as ‘frankly, a lazy conclusion that casts aspersions on all football fans’.

Clearly. Supporters congregated to celebrate Liverpool winning the title at Anfield when they didn’t even play. Imagine how many more would have turned up – and for longer periods of time – if they had been in a title-deciding game.

‘When it emerged on Thursday evening that Liverpool might have to play their title decider somewhere other than Anfield, club officials – not for the first time during the hiatus – were flabbergasted and frustrated by the indication that supporters could not be trusted to stay at home.’

A penny for the thoughts of those club officials.

‘One half of the city has been living for this moment and it is risible to suggest the vast majority won’t be able to contain themselves, a point illustrated when Merseyside Police assistant chief constable Rob Carden said his force ‘is ready to provide whatever policing is required – we’ve no objections’.

‘They are not stupid. They know people will want to go to Anfield if and when the title is secured but the key difference is that any gatherings will start long after the matches have been completed. That was always going to be the case, whether they won it in the North East or on the South Coast.’

And to the final paragraph:

‘The time will come in the future when it is right for them to gather en masse, but for now, potential parties must be small. In a city which has been crippled by the many effects of coronavirus, nobody will need to be told twice. The trophy is all they want.’

So Anderson was right to have his reservations all along. And it was not a characterisation of football fans at all but an accurate assessment of basic human nature – as the hundreds of thousands of people flocking to Dorset proves.

This, it should be said, was back on May 30. Measures have changed since then. But not nearly enough to make thousands of people gathering in one place anything close to acceptable.

And King knows that. Yet he is back on Friday to discuss how the roads outside Anfield ‘were heaving’, how there was an ‘outpouring of emotion’ and that ‘fans simply could not contain themselves despite all the pleas for social distancing’.

‘All the pleas’ that you dismissed out of hand. And are now trivialising.

‘The party will go on for days. Why wouldn’t it? They have waited three decades for this. It is time for them to drink in every second.’

And time for you to apologise to Joe Anderson.

Mediawatch places no more blame on the fans that headed to Anfield on Thursday evening than it does on those seeking out a square metre of beach during the day. Both should have known better, whether eager to celebrate a first Premier League title in 30 years or just some lovely weather. The behaviour of both groups should be questioned. One shouldn’t be passed off as forgivable just because football fans have been unfairly targeted and vilified for decades (and you happen to be that area’s correspondent for your newspaper). And both BT Sport and Sky Sports were complicit in encouraging and glorifying such behaviour in the name of ‘good television’.

A right old Mes
The Sun have a problem with Mesut Ozil. That much is common knowledge and it is not for us to speculate why this particular newspaper takes such offence at a foreign footballer daring to be paid a lot of money by his employers.

One might ordinarily assume that Ozil not playing for Arsenal would mean he is not in the firing line, however. Yet obsession is an awfully powerful thing.

'Arsenal won, boss. We can't dig them out for being soft.'

'Used an umbrella on the bench to protect himself from dangerous UV levels and immense heat.'

'THERE'S YOUR STORY IGNORE THE OTHER PLAYER DOING THE LITERAL SAME THING AND MAYBE SAY HE'S ON A JOLLY.' pic.twitter.com/bNxmOBZ2wD

That is indeed a picture of Ozil shielding from the sun on the hottest day of the year so far, with the Met Office having warned of high levels of UV radiation. And while the caption says only ‘unused sub Mesut Ozil watches rookie Eddie Nkietiah net opener from under a giant umbrella,’ Alexandre Lacazette is right there doing the exact same thing.

The first paragraph of Duncan Wright’s article even makes mention of how ‘sub Mesut Ozil watched under a brolly in the stands,’ as if a) he was the only one, and b) that wasn’t a sensible thing to do given the climate.

But hey, the bloke’s on a ‘jolly’, apparently.

You can stand under my umbrella
Then we get to Mark Irwin’s match report, and the usual mention of ‘pampered stars’, ‘the £350,000-a-week German’ and ‘chucking in the towel’.

Imagine if he actually played.

But Mediawatch’s favourite bit was this:

‘The £350,000-a-week German might as well have been put on furlough by Arsenal, for all the good he has been since the launch of Project Restart.

‘As Arteta explained: “I put the best players on the pitch that are 100 percent focused to win the game.”

‘And what a damning indictment of Ozil’s contribution that is, because he spent the game hiding from the scorching sun under an umbrella…’

Tattoo fixers
Mark Irwin has something else to say in his column for The Sun. Let’s at least hear him out.

‘With the exception of marathon runners talking about their split times, is there anything more boring than footballers’ tattoos?

‘Every trip to the parlour is treated with the absolute reverence of a tour of Michelangelo’s Sistine Chapel in the Vatican. Players covered in more ink than was used in the 1,225 pages of the first edition of War and Peace love to bang on about the deep meaning behind their Maori tribal markings.

‘But the people who are most obsessed with these musings are posho sports journalists who would swoon at the mere sight of a needle.

Well this is really bloody awkward. Your newspaper seemed to find Raheem Sterling’s tattoo anything but ‘boring’ a couple of years ago. Mind, you didn’t listen to ‘the deep meaning behind’ it then, either.