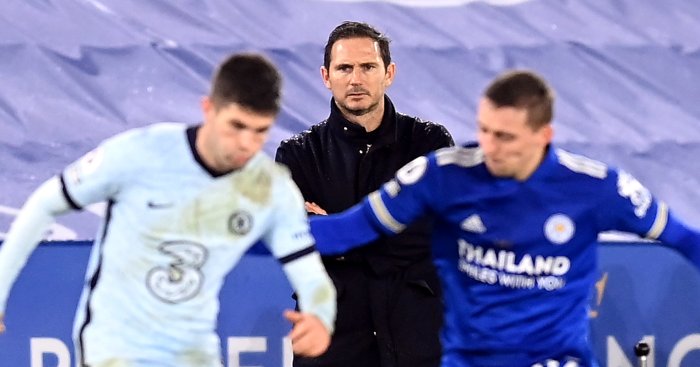 What can ‘conscientious’ Lampard possibly do when offside Chelsea goals are ruled out for offside?

The Bryce is right
Leicester went top of the Premier League table on Tuesday. Actual Leicester. You probably wouldn’t realise when reading any newspaper sport sections or scanning through football websites – very much including one not a million miles from here – but it remains true.

That fact has not bypassed Graeme Bryce of The Sun, however, as he goes against the grain and actually leads on the Foxes rather than the Franks.

‘Fast forward five years and the cunning Foxes are being devilishly furtive again – in full view of everyone. But this time no-one is ignoring the team who sit proudly at the top of the Premier League,’ he writes in his fourth paragraph.

‘Somehow the 2016 champions have managed to glide in under the radar again, despite cuffing Manchester City, Spurs, Arsenal and Leeds in their own backyards and swatting Chelsea aside,’ reads his ninth.

Great to see ‘no-one is ignoring the team’ that has ‘managed to glide in under the radar again’.

‘Despite the hype when the Blues went top of the league in early December, Lampard’s men have crumbled under the pressure since then.

‘Don’t expect Leicester to suffer the same fate as they enter the second half of the season where they will relish the prospect of a rut with Liverpool and the Manchester giants.’

Leicester looked and indeed have been excellent this season. There is indeed literally no precedent for them being as high as second after the first half of a campaign before embarking on a poor run to finish fifth.

If 2019/20 proved anything, it’s that Leicester absolutely do not ‘crumble under the pressure’, particularly not during ‘a rut with Liverpool and the Manchester giants’.

The chosen few
Simon Phillips was on player ratings duty elsewhere in The Sun.

Here is just a selection of his choices:

On Mason Mount: ‘One of the few Chelsea players who actually played with any fight or desire.’

On Callum Hudson-Odoi: ‘One of the few players trying to make things happen and play with a bit of urgency.’

On Christian Pulisic: ‘One of the few who did put in the effort and try to make things happen.’

Then comes his assessment of Mount in a longer opinion piece:

‘Mason Mount was the only one out there looking like he actually cared whether they won or lost, the rest of them were limp and had no fight at all.’

‘Players were happy to do the basics and that is about it.

‘Happy to run but not with any conviction, happy to play football but not win the match.

Well Lampard himself stated the exact opposite: that “the basics are important like running and sprinting and we didn’t do that”.

But also it really is a bit much to claim that professional footballers were ‘happy to play’ but not to try and beat their opponent. Phillips does at least question Lampard’s substitutions but what can a manager possibly do when ‘he does not have one real leader in the team’ he has spent millions assembling?

It’s mad how serial trophy winners like Thiago Silva or three-time European champion Mateo Kovacic don’t even want to win matches anymore. Poor Frank is helpless for as long as the 11 full internationals he puts out each week just run a bit and are ‘happy’ to play but not even attempt to beat anyone.

Conscientious objector
That theme continues in the Daily Mail as Ian Ladyman pens his match report:

‘Chelsea, so promising for much of Lampard’s debut season last time round, suffered at the King Power from what appeared to be a mixture of draining confidence and tactical and positional uncertainty.

‘That is a pretty toxic combination and conscientious, likeable Lampard is in trouble now, right enough.’

He might well be conscientious. He could certainly be likeable. But a) that is almost entirely irrelevant when evaluating the actual merits of his coaching acumen, b) there are plenty of other ‘conscientious’ and ‘likeable’ people out there who might fancy a crack at managing a £400m squad, and c) Mediawatch cannot think of another manager who would be described in such terms while sitting below West Ham and only inhabiting a place in the top half of the table after half a season because they have played more games than Southampton and Aston Villa.

Not sure Roman Abramovich will care all that much that Lampard puts in a lot of effort and still has journalists tripping over themselves to defend him despite incredible under-achievement. To be honest, the fact he is ‘conscientious’ makes it worse; this is him trying his hardest and still sitting just two points above an Arsenal side having one of their worst Premier League seasons ever.

Lamp shade
Ladyman lays it on even thicker, so to speak:

‘Chelsea carried no luck, it must be said. Two minutes before Leicester’s second goal, they were awarded a penalty only for it to be overturned by VAR. Then, with five minutes of time left at the end of the game, a late surge seemed possible when Timo Werner nudged in a free-kick. This time, the decision was offside.’

You have just described correct officiating decisions, not a lack of ‘luck’. Poor Frank again, having free-kicks awarded instead of penalties for fouls outside the box, and goals ruled out for offside when they are offside, as well as players who don’t want to even win in a squad without any leaders that he has spent more than £200m on.

Why does it always rain on him?

Luck here
Then there’s Tom Collomosse with his quotes story in the Daily Mail:

‘Luck was not on Chelsea’s side: they were awarded a penalty with the score at 1-0, only for the spot-kick to be overturned after VAR ruled Jonny Evans fouled Christian Pulisic outside the box. And in the closing moments, substitute Timo Werner’s close-range volley was ruled out for a marginal offside.’

The bloke really must have walked under a stepladder while smashing a mirror and crossing paths with a black cat. How incredibly out of his depth unfortunate he is.

Law of attraction
In the frustrating absence of a Stan Collymore column on the man he considers to be ‘the brightest English coach to emerge for a generation’ (a reminder that in June he told Abramovich to give Lampard time as he ‘will build a team capable of winning the title in two or three years’), the biggest cheerleader for the Chelsea manager is probably Matt Law of the Daily Telegraph.

This is the man who referred to Chelsea’s pre-season friendly against Bohemians in June 2019, Lampard’s first in the dugout for the Blues, as an “I was there” moment’ for supporters.

But to January 2021 and what is surely a defeat too far to continue on this lonely bandwagon.

Or not: ‘Lampard knows he will carry the ultimate responsibility for results and yet he cannot be solely blamed for the dreadful lapses in concentration for Leicester’s first-half goals that left his team with a mountain to climb.’

Well at least we’ve found Jamie Redknapp’s pen name. No-one is saying he can be ‘solely blamed’ for anything at Chelsea but it cannot possibly be news to anyone that it is easier to sack one under-performing and remarkably inexperienced manager than it is to get rid of an entire squad of under-performing players.

Law goes on to pinpoint Antonio Rudiger’s ‘bizarre season’ as one of the reasons for the ‘confusion’ in the Chelsea defence.

‘At the start of the campaign, Rudiger had dropped to fifth choice in Lampard’s central defensive pecking order with the 27-year-old unable to get on to the substitutes’ bench, let alone into the team.

‘And yet at the halfway stage of Chelsea’s Premier League season at the King Power Stadium, Rudiger was starting his second successive game ahead of Kurt Zouma and Andreas Christensen.

‘Rudiger is one of the more dominant figures in the Chelsea squad, so Lampard was left with a dilemma when the club did not sell him or find a suitable loan move during the summer transfer window.’

Add it to the list alongside correct officiating calls and managing non-leaders who do not want to win: Chelsea failed to offload Rudiger so Lampard was given no choice but to randomly reinstate the £34m centre-half he had previously frozen out without a hitch. What else could he possibly do other than play him in consecutive Premier League games?

‘Continuing to freeze out such a senior player would have been a gamble on Lampard’s part.’

The ‘gamble’ was surely freezing him out in the first place. Bringing him back into the first-team fold – something he has somehow resisted with Marcos Alonso – while continuing to overlook Fikayo Tomori, for example, was more naive foolishness than anything else.

Crock of Twit
The fun continued on his social media with this tweet:

What's become clear to me is that whoever is in charge of Chelsea – and I still believe it should be Frank Lampard – they have to build a culture, as well as a team. And building a culture is going to be much more difficult than assembling lots of talented players together.

What is this vital ‘culture’? Who knows. What proof is there that Lampard is capable of ‘building’ it? Beats Mediawatch. But apropos of absolutely nothing whatsoever, it is almost exactly a year since the same man posted this:

Phil Neville said United have got to stick with Solskjaer and that "they are where they are and people have got to accept it." Absolute nonsense. There is no way anybody associated with United should accept what's going on and there is no way Solskjaer should be manager.

January 19, 2021: Chelsea are 8th in the Premier League table, five points off Champions League qualification having played an extra game. Lampard should still be manager; give him time.

January 23, 2020: Manchester United are 5th in the Premier League table, six points off Champions League qualification with actual wins over teams in the top six. Ole Gunnar Solskjaer must be sacked immediately and those who say they ‘have got to stick’ with him are speaking ‘absolute nonsense’.

And that’s without even starting on the fact it took little more than for Maurizio Sarri to wear a tracksuit for a scoffing Law to point out that ‘moneyed folk back winners over philosophers’.