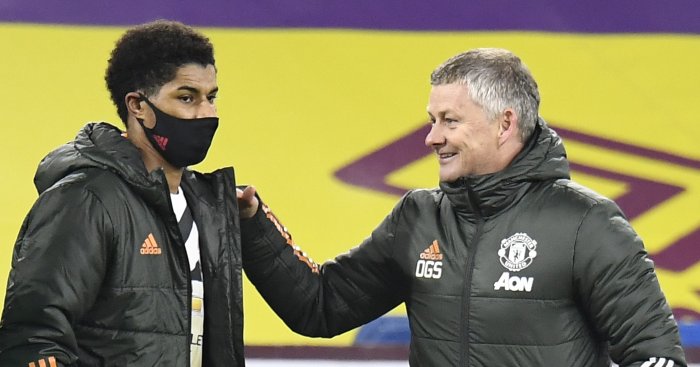 ‘Marcus Rashford is waging a brilliant war, but he must be careful not to let his football suffer,’ is incredibly strong headline work from the Daily Telegraph, only outdone by the sheer brilliance of the sub-head:

Good lord. Imagine typing that out and thinking it’s fine and not absolutely dreadful. Cheers for trying to make sure young people are fed but at least try and complete more than 89.6% of your passes in an away win at Burnley next time, pal.

Luke Edwards is the journalist in question but, as he has spent the subsequent hours stressing, not the person responsible for either monstrosity.

Quick skim of the Twitter comments and I’m betting not a single person has read the article. Not one. One of the huge problems with social media. Dash to be offended, don’t bother to actually read what has been written.

Well Mediawatch is here and ready to knock down this paywall and show that Edwards has simply fallen victim to a) an overzealous headline-writer and b) silly people who fail to look beyond that headline before criticising.

You see, his opening five paragraphs are dedicated solely to calling the Manchester United forward ‘remarkable’, ‘one of the finest of his generation’ and ‘a role model’. As he writes:

‘He could well inspire a generation and bring about real change. He has put politicians on the back foot and has shaped and driven a national debate about child poverty in a country currently crammed full of health, economic and social distractions.’

This is praise. Of that there is no doubt. But then it slowly descends into something a little different as Edwards searches for reasons why Rashford was not at his absolute best at Turf Moor.

‘Not for the first time, Rashford prepared for battle with Burnley by picking another fight to protect hungry children, those let down by those in power and apparently short-changed by the private companies in charge of distributing the free school meals he fought tirelessly to secure,’ he writes, laying the groundwork before pointing out that the forward spent that morning ‘in online meetings with those to blame’.

‘Anyone who has campaigned, anyone who has fought for a cause as part of a pressure group will know it can be exhausting,’ he adds. And it is around this point that Mediawatch realises what comes next.

‘This, though, was a huge game for Manchester United and shunted out to the right wing – his least favourite attacking position – Rashford was subdued.’

By the next paragraph he was ‘contained’. One more later and ‘he gave the ball cheaply [sic] in other positions too’ as it became ‘too much to ignore’ for those in the press box desperate for a fresh narrative.

Edwards then lays his cards out on the table:

‘It raised a legitimate question. When most players sleep the afternoon before a game, was Rashford head [sic] too full of thoughts to do so? Were his emotions, his anger at the scandal unfolding, draining him more than he realised? As commendable as his actions are and will continue to be, on this occasion was it a distraction?’

And there it is. Well done, Marcus. Cheers for all that campaigning and everything, fella. But are you sure you, a 23-year-old man, are entirely capable of concentrating on more than one thing at a time? Is all this social justice not ‘draining’ and a ‘distraction’ from the truly important things: playing well against Burnley at Turf Moor? Are you getting enough sleep? These are legitimate questions, remember.

Edwards even mentions a tweet from Rashford himself that summarily destroys everything he says: a footballer logging off from social media more than nine hours before a game is anything but ‘distracted’.

I have a game today so have to log off but I wanted to update you on the conversation and I look forward to hearing the outcome of the DfE meeting today.@Chartwells_UK @educationgovuk

Something is going wrong and we need to fix it, quickly!
(8)

Mediawatch would guess that that was the last thing Edwards wrote before Rashford’s sublime assist for Paul Pogba’s winner, because by the next paragraph he is suddenly a player who ‘even when he is quiet, he has the knack of being able to make a noise when he needs to’.

Ah yes, the tell-tale sign of a ‘drained’ and ‘distracted’ young footballer not getting enough sleep: a decisive assist in the 71st minute against one of the toughest defences in the country.

Edwards ploughs on regardless because by this point he has already written 500-odd words and isn’t about to scrap all that and start again with 20 minutes to go until full-time. We really have all been there.

‘Rashford needs to be careful, even though the most important statistics do not show a player who has been distracted or drained.’

So why were you baselessly speculating about whether ‘his emotions’ were ‘draining him more than he realised’ and if this was all just becoming a ‘distraction’?

And why are you choosing now to point out that ‘Rashford must be wary of taking on too much’ when it was he who made the difference? What excuse did Edinson Cavani, Anthony Martial and Bruno Fernandes have for not scoring? Or, and bear with us here, can elite footballers simply have off days with no obvious explanation in difficult circumstances?

‘Football respects him for what he is doing, and large swaths of the country love him for it, but Rashford remains a hugely talented footballer and did not play like one, that one moment of brilliance aside, against Burnley.’

Mediawatch would argue that not playing all that well but still providing the match-winning moment is *precisely* how ‘a hugely talented footballer’ often operates.

‘He should not stop what he is doing, we do not want him to halt fighting for what he believes in, but nobody can take on everything and everyone every day of the year.’

So ‘he should not stop what he is doing’ but also he cannot possibly keep doing what he is doing while simultaneously fulfilling his role as a Manchester United player to the best of his abilities?

Rashford is one of six players with at least five goals and assists each in the Premier League this season. He is a regular starter for the team top of the table. And he is spending his free time away from being that brilliant by calmly crusading for children to be fed. The praise you afford him at the start of your article does not need to be qualified at any point, never mind after he provides a clever assist to the only goal in a crucial 1-0 win during which neither he nor his teammates were at their best while still accomplishing what they set out to.

The headline is terrible, undoubted clickbait with deliberately negative and evocative language. The sub-headline is abhorrent, honestly quite pathetic when you consider the newspaper’s political allegiances and has indeed since been changed as a reflection of just how bad it was. The article is much fairer than both yet not nearly as justified as the journalist who has spent Wednesday morning telling people they haven’t read it thinks it is.

Mediawatch has read the article. It would rather it hadn’t. But if you’re going to commit those words to print then at least own them instead of stressing the virtues of a paywall and pretending that legitimate criticism is merely a ‘dash to be offended’ when what is written is offensive.

Imagine doing anything but praising, supporting and encouraging this guy. Couldn’t be us.

Just had a good conversation with the Prime Minister. He has assured me that he is committed to correcting the issue with the food hampers and that a full review of the supply chain is taking place. He agrees that images of hampers being shared on Twitter are unacceptable.