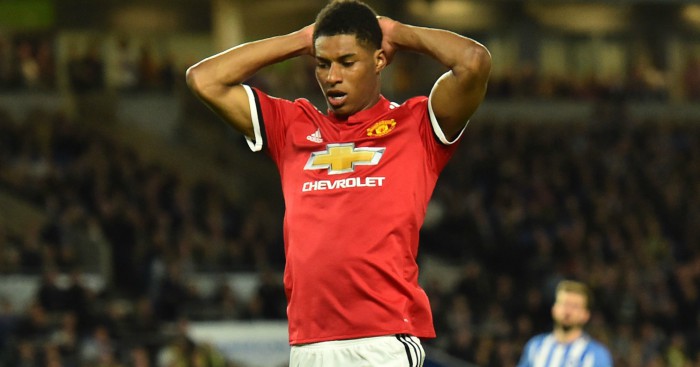 Once in the 20th paragraph of a 34-paragraph piece, if you’re asking.

Howe can he get experience?
It’s worth noting that despite the headline saying that ‘Tottenham could replace Mauricio Pochettino with Zinedine Zidane’, Paul Jiggins actually admits that he is ‘unlikely to want to scrimp at Spurs’, while Eddie Howe is pretty summarily dismissed.

‘Eddie Howe has done a fine job at Bournemouth, but nowhere else and has no big club or European experience.’

Because of course Mauricio Pochettino had extensive big club and European experience when he took over at Tottenham.

As the question asked was which sides could challenge Manchester City for the title, we should note that Bernardo Silva also SNUBBED Bournemouth and Watford, who are both currently above eighth-placed Manchester United in the table.

Can you hear the guns, Fernandinho?
‘MANCHESTER CITY may be majestic to watch but in Fernandinho they have a player who helping them become masters of the dark arts,’ writes Martin Keown – who should know a thing or two about such things – in the Daily Mail.

Mediawatch has to say that it’s rare that ‘masters of the dark arts’ would have committed the fewest fouls in the whole of the Premier League. That seems a tad odd.

And as for Fernandinho, there are 56 Premier League regulars who have committed more fouls per 90 minutes than the Brazilian this season. So if he is the ‘smiling assassin’, then he is a pretty poor shot. In which case, he has very little to smile about.

Yes, beating Mousa Dembele 4-3 on fouls. Though it is a little bit relevant that Dembele did not last the whole 90 minutes.

‘…and has been responsible for one-fifth of all the free-kicks his side have conceded in the Premier League this season.’

Well he is their only defensive midfielder.

‘When the opposition are mounting an attack, he is the player who makes those tap-tackles to disrupt their momentum. He is the one tasked with hurtling across the pitch at great speed to make a last-ditch challenge.’

Yes, he is their only defensive midfielder.

‘As a result, Fernandinho makes more tackles than any of his teammates.’

And here – for Martin Keown or anybody else who might be interested – is a definitive list of City players who attempt more tackles per 90 minutes than Fernandinho in the Premier League:

It’s a long list. But then they are ‘masters of the dark arts’.

When is a ‘shock’ not a shock?
‘Manchester United flop Alexis Sanchez wanted by PSG in shock transfer, amid continuing Old Trafford struggles’ – The Sun online.

He’s been sh*t, PSG wanted him before, and his wages rule out all but the super-rich. The only shocking thing about this transfer claim is that it sounds quite plausible for a Daniel Cutts exclusive.

Why? Basically ‘because The Sun mentioned it in their piece and FREE is the kind of word that looks good in capitals’.

An impossible dream
Marcus Rashford has turned 21. And what is the best way to celebrate turning 21? By being set ridiculous targets by a former club captain, that’s how.

“The only thing I’d like to see is his finishing being that little bit better, where we get Marcus up to 20 or 30 goals in a season, whether he’s playing out wide or through the middle,” says Bryan Robson.

He doesn’t want much, does he? Only seven Manchester United players have scored 20 goals in a season in the last ten years.

As Rashford has scored just one goal so far this season, we suspect he is not about to join that list.

Penalty appeal
We honestly do not want to spend every day kicking the Manchester Evening News for their exhaustive and exhausting United coverage, but when Samuel Luckhurst writes this kind of sh*te, we really have no choice.

‘Paul Pogba has had two Man Utd penalties saved this season and the club already has a perfect penalty taker available if they replace him’, it says here.

There follows 901 words meandering through a history of recent Manchester United penalty-takers. The 837th and 838th words are those of the ‘perfect penalty taker’, who last actually took a penalty for United over three years ago.

Oh and started his only Premier League game of the season in August. Apart from that, Ander Herrera is definitely United’s ‘perfect penalty taker’.

Non-story of the day
‘Manchester United’s plea for extra tickets for the derby game has been largely ignored by hosts City’ – Daily Mail.

Manchester United were given 2,792 tickets last season; they have been given 2,862 tickets this season.

That’s definitely more tickets. And probably not ‘a move which may stoke cross-city fires’.

Wilf Zaha says he’s racially abused. So let’s use a picture of Wan-Bissaka on the story. Come on @theipaper ffs pic.twitter.com/ttp6uDImda

Recommended reading of the day
Tim Wigmore on Qatar 2022