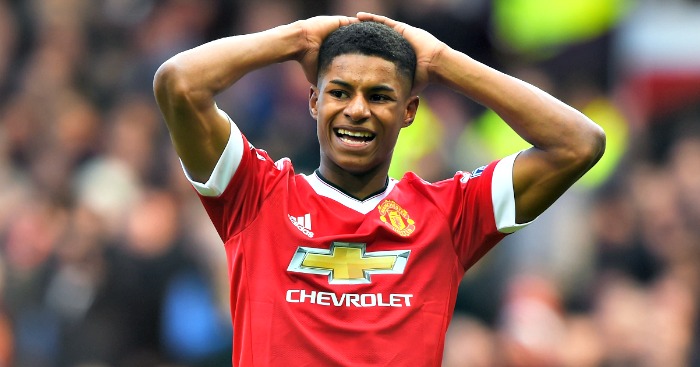 When you forget what you said two days earlier
Monday: “I think he has an outside chance. He [Hodgson] has brought him in because he has done so well at the back end of the season. He is the one reason why Manchester United have finished so well. Bear in mind he is in the team in front of Rooney in his favoured position, so that tells you something straight away. He’s had a wonderful end to the season, given United a big lift and being involved with the seniors” – Stuart Pearce tells Sky Sports News HQ why he is pleased Marcus Rashford is in the England squad.

Wednesday: “His call-up is a contentious one, for me. With the Toulon Tournament going on at the same time as the senior training camp, maybe he should be playing there for his experience. I don’t think he’ll be in the 23 anyway, but if Hodgson really wanted to take him to the Euros, he could have called him back from Toulon – he’d still be match-fit” – Stuart Pearce tells Talksport why he is not impressed that Marcus Rashford is in the England squad.

We could be heroes…

‘You can be legends’ – Daily Express.

‘My team can be legends, says Klopp’ – The Times.

‘It’s time for my players to be legends’ – Daily Telegraph.

‘Why Jose Mourinho will (probably) go to Real Madrid and not Manchester United’ – Metro, April 10.

For the love of god, Jorge, just wait for Manchester United.

Reading the mood
‘Meet the stunning England Wags line-up Euro 2016 set to light up our screens this summer,’ reads the headline on The Sun’s football – that’s football – homepage.

‘SunSport runs the rule over the gorgeous partners of the Three Lions’ preliminary squad,’ the tagline reads. Thank f**k for that.

‘Debate is hotting up over which England stars should play in France,’ a piece by Toby Gannon begins. ‘But another line-up we are all desperate to find out is the Three Lions’ Wags.’

– ‘There may be calls for captain Wayne Rooney to be benched, but nobody is protesting wife Coleen turning out in France.’

– ‘Chris Smalling looks like a certain starter in Hodgson’s side. Which is brilliant news for fans, who are eager to catch a glimpse of the Page 3 babe.’

– ‘Jack Wilshere popped the big question to Andriani this week. And now she has a shiny ring on her finger, the beautiful brunette will look even more dazzling in France.’

– ‘The pressure is on for Golden Boot winner Harry Kane to find the back of the net this summer. But the prolific Tottenham striker knows he has already scored with Kate by his side.’

The development of a self-created news story, with Sky Sports
‘BREAKING: Sky Sources: West Ham United teenger Reece Oxford rejects new contract and can leave for a bid in excess of £10million’ – Sky Sports, May 17, 8.28pm.

‘WATCH: Is Reece Oxford leaving West Ham? He has reacted on social media this evening. Has he cleared things up?’ – Sky Sports, May 17, 9.15pm.

The curse
‘The curse of LVG has struck again – as Juan Mata and Ander Herrera – became the latest victims’ – The Sun.

That ‘curse’ is Manchester United players not being picked by their country for Euro 2016. Those United players to have avoided the curse include David de Gea, Anthony Martial, Chris Smalling, Wayne Rooney, Marcus Rashford, Bastian Schweinsteiger and Marouane Fellaini. Still, don’t worry about that.

Also, the ‘not magnificent 7’ named by The Sun includes Herrera (who has never been capped), Michael Carrick (one competitive appearance in almost three years), Ashley Young (almost three years since last cap), Phil Jones (46 club minutes in 2016 and perma-crocked) and Adnan Januzaj (no cap since 2014).

‘Manchester City are set to win the race to hand retiring Arsenal star Mikel Arteta his first coaching role. The 34-year-old midfielder admitted following the Gunners’ 4-0 defeat of relegated Aston Villa on Sunday in their season finale that he had received three offers for his services. As revealed by Sportsmail earlier this month, one of those offers is to join fellow Spaniard Pep Guardiola at the Etihad Stadium’ – Daily Mail.

Top back-slapping guys, but that Sportsmail ‘reveal’ was on May 6, almost a month after the Daily Mirror’s John Cross wrote that ‘Pep Guardiola wants to make Arsenal captain Mikel Arteta part of his coaching set-up at Manchester City’.

‘Sometimes a cock-up is just that,’ writes the Daily Mail‘s Martin Samuel on Manchester United’s security situation on Sunday. ‘What happened at Manchester United on Sunday was a cock-up. No doubt it was disturbing, and certainly hugely inconvenient. Yet those reading more into it are being overly dramatic.’

And if there’s one man who knows about being ‘overly dramatic’, it’s Samuel. Elsewhere on the same page, he writes his third separate piece on Christian Fuchs pouring champagne over Claudio Ranieri.

‘Incredibly, some have used Munich’s antics to justify the unscripted soaking of Leicester’s Claudio Ranieri in front of the world’s press,’ Samuel writes. ‘Those equating the two know little of German culture – and less of their fellow man. There are always boundaries.’

On Sky Sports Now we want to know what's next for Manchester Utd? Let us know using #SSNHQ

Image of the day

Recommended reading of the day
Swiss Ramble on Bournemouth.

Mark Sochon on Sevilla and the Europa League