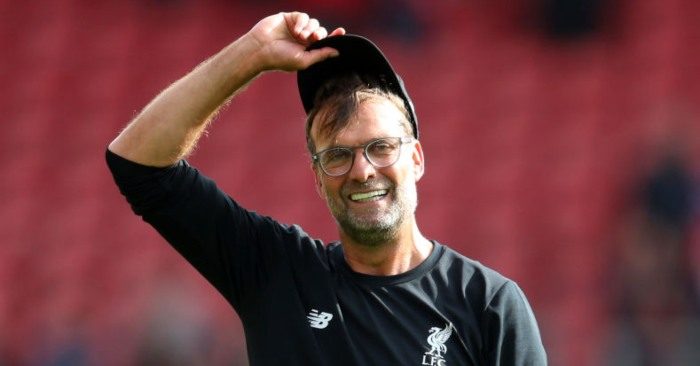 Is this the worst opening line ever?
This is from Graeme Bryce in The Sun and it has damned near made us cry.

‘EDDIE HOWE is delighted with his Harry Reds nab.’

He actually typed that and actually pressed ‘send’.

Liverpool crisis alert!
Liverpool are top of the Premier League.

It is important to remember this as you join us in bafflement at The Sun publishing a double-page spread which features this headline:

Yes, after four games into a season which has already reaped one sort-of trophy, two Premier League victories and a shoot-out defeat to the champions, let’s absolutely talk about the negatives.

Alternatively, beating Southampton 2-1 less than 48 hours after flying back from Turkey following 120 minutes of football shows up Liverpool’s extraordinary levels of planning and preparation.

This is not a ‘potential nightmare situation’, it is one mistake – which was inconsequential to the result – from a goalkeeper whose actual save won the Super Cup in midweek.

Liverpool are top of the Premier League.

It’s important to remember this as you join us in bafflement at this (mammoth) headline on MailOnline:

They have played one sodding game.

‘It can be no coincidence that shortly after Harry Maguire breezed through the doors at Old Trafford, talk began to swirl about a new contract for Victor Lindelof.’

On the contrary, it can be a coincidence.

‘The players slotted in together seamlessly against Chelsea last week. They are young, Maguire is 26, Lindelof 25, and could be the bedrock for United for the next five or six seasons.’

They have played one sodding game. Against a Chelsea forward pairing of Tammy Abraham and Mason Mount. Can we wait for just a few minutes?

And then we head to the Daily Mirror, where David McDonnell writes:

‘IN Harry Maguire and Victor Lindelof, Manchester United now have a central-defensive pairing to rival the best the club has seen.

‘Not since the days of Rio Ferdinand and Nemanja Vidic or, before them, Steve Bruce and Gary Pallister, have United had such a formidable duo at the heart of the defence.’

Now you would think that McDonell would be wary of making such rash judgements in August, as this is what he wrote at this time of year back in 2011:

‘Rio Ferdinand’s England place might not be the only cause for concern for the Manchester United defender.

‘He’s also facing the prospect of no longer being an automatic pick for his club.

‘The remarkable manner in which Phil Jones has slotted into United’s defence, with an assurance and conviction that has brought him a first full England call-up, has given Sir Alex Ferguson a genuine selection dilemma when Ferdinand is fully fit.

‘For the last five seasons, Ferdinand and Nemanja Vidic have formed a formidable central defensive partnership – undoubtedly United’s most effective and reliable since Steve Bruce and Gary Pallister in the late 1980s and early 1990s.

‘Jones, like Chris Smalling, was bought for the future – Ferguson was mindful of Ferdinand’s age and injury problems in recent seasons, and the need for a ready-made replacement was a necessity to ensure a smooth transition of personnel in such a crucial position.

‘But 19-year-old Jones, despite his relative inexperience, has been a revelation alongside Jonny Evans in the centre of defence since injuries to Ferdinand and Vidic forced Ferguson to pair up the two youngsters.’

History records that Ferdinand was back in the very next game.

Frankly ridiculous
On Friday, ‘Hamstrung Lampard’ had ‘done enough to secure his dream job for the long haul’, according to Andy Dunn of the Daily Mirror.

He had lost his first two games, but who could hold that against him when he had been ‘hamstrung’ by only being able to bring in a £58m winger?

On Sunday, Chelsea were lucky to escape with a 1-1 draw at home to Leicester, so on Monday, Dave Kidd of The Sun wonders how he could possibly do any better. Apparently the idea that Lampard could ‘spur this inexperienced squad on to great deeds was always fanciful’. How could he possibly achieve anything with pretty much exactly the same squad that finished third and won the Europa League last season?

‘The starting line-up read like the sort of side Chelsea used to field in the League Cup.’

Which is bizarre because eight of the 11 players who started the actual Europa League final – less than three months ago – also began the game against Leicester at Stamford Bridge on Sunday. The starting line-up read like the sort of side Chelsea used to win the Europa League.

And of the three changes, only one was forced by the admittedly damaging exit of Eden Hazard. Elsewhere, Frank Lampard himself chose to sideline and then sell David Luiz, while Mount replaced Mateo Kovacic and produced what The Sun declare to be a man-of-the-match performance. So let’s call that even.

Now you’re reaching. Once again, losing Hazard was a blow, but Luiz was not ‘lost’; he was shunted out. And Fabregas left last January having started just one Premier League game that season. Oh and they never had Morata and Higuain – just one and then the other, and they were both bloody useless. Or ‘misfiring’, as you’d have it.

You know who they do have? Michy Batshuayi, that’s who – a £30m-plus striker who scored five goals in 11 Premier League games for Crystal Palace at the end of last season. And where was he on Sunday? In the stands as the limited Tammy Abraham came off the bench, of course. Other fit Chelsea players yet to play a minute this season include Marcos Alonso, Tiemoue Bakayoko, Davide Zappacosta and Kenedy.

And yet Kidd insists that this is a ‘squad ill-equipped to compete in both the Premier League and Champions League’ that is ‘comfortably the thinnest of the Roman Abramovich era’.

‘He is perhaps only now realising quite how tough this job will be.’

And Mediawatch is perhaps only now realising quite how much leeway will be handed to poor Frankie Lampard by a fawning media this season.

Give me oil in my Lamp
The Daily Mail‘s Ian Ladyman uses the majority of his column to suggest that Liverpool may have made a mistake in not re-signing Philippe Coutinho on loan, but he also serves us this tidbit:

‘When Steve Harmison bowled that notorious first-ball wide to Justin Langer in Brisbane at the start of the 2006 Ashes series, the worst thing captain Andrew Flintoff did was take him off after two overs. It sent Harmison a clear message that even his good friend just couldn’t trust him.

‘With this in mind, it was interesting to see Frank Lampard stick with Kurt Zouma in Istanbul last Wednesday.

‘Zouma, 24, had a horror show as Chelsea lost at Manchester United on opening weekend. Everything that could go wrong did go wrong. But Lampard sent Zouma out again in the Super Cup against Liverpool and the Frenchman came good. Sound management, that.

Well, ‘sound management’ and the fact that selling David Luiz left them with only three fit centre-halves, with the entirely untested Fiyako Tomori the only alternative.

Interference
Garth Crooks included Kevin De Bruyne in his BBC Team of the Week last week so he could have a pop at VAR and he is not one to let it lie, so here he is again on Dani Ceballos:

‘Dani Ceballos’ involvement in a move to set up Reiss Nelson was superb. That was before that interfering, meddling, busybody called VAR poked his hi-tech nose in and ruled some wonderful work by Ceballos offside.’

Pesky fact: The assistant referee actually put his flag up for offside. VAR checked and decided not to ‘meddle’ because the call was correct.