What happens when a transfer story from 2009 is re-published? It becomes a fresh rumour, of course. 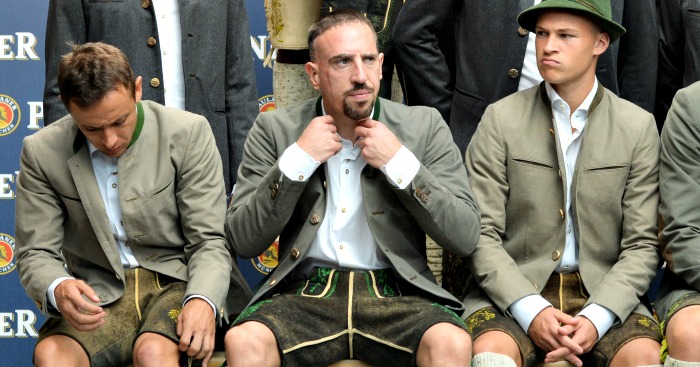 Nailed it
‘Why Manchester United manager Van Gaal is on course for his best week as Reds boss’ – Manchester Evening News, November 25.

To be Franck
‘Chelsea in £45million swoop for Franck Ribery: Roman Abramovich to break the bank for Bayern Munich star,’ reads a particularly juicy transfer headline on the MailOnline on Thursday morning. The first warning sign is the price tag; £45million for an injured 32-year-old? Time to delve further.

Similar red flags, such as ‘Ribery is under contract until the summer of 2011’, ‘he is said to be frustrated with Bayern’s stuttering European form’, and ‘while Chelsea have cruised into the second round of the Champions League…’ are littered throughout the story, which is actually from 2009. Lawton himself insists it was re-published in error due to a glitch, but that didn’t stop a number of outlets picking up the ‘Ribery to Chelsea’ line on Thursday morning.

At the time of writing, Sky Sports still proudly emblazon the link on their Transfer Centre, while the Daily Mirror include it in their transfer round-up. The Guardian, ESPN and Eurosport all ran the rumour as well, but at least realised their error. Unfortunately, the respective URLs reveal their murky secrets.

Mike drop
Chris Smalling’s post-match interview with BT Sport after the 0-0 draw with PSV was a delight:

Question from the reporter: “The manager wanted the ball moved quickly tonight, what went wrong?”

Answer from Smalling: “I think we needed to move the ball a little bit quicker.”

Getting shirty
Harry Redknapp was in a rotten mood as a pundit for BT Sport on Wednesday night. Why? Yaya Toure and Paulo Dybala swapped shirts. At half-time. The bloody horror.

The Sun have dubbed it a ‘SHIRT-SWAP FURY’ on their back page (yes, back page), with Redknapp saying: “I don’t like it, personally, at half-time. At the end of the game, fine. Can you imagine Vinnie Jones at Wimbledon swapping shirts?”

Can you imagine Vinnie Jones playing in the Champions League?

Poor analysis
Fresh from criticising players for swapping shirts at half-time, Redknapp was quick to lay into the standard of the sides in this season’s Champions League. The former Spurs boss labelled the following sides as “poor” during his evening on BT Sport: PSV Eindhoven, Wolfsburg, CSKA Moscow, Olympiakos, Shakhtar Donetsk, Porto, Dynamo Kiev, Sevilla. No English sides, you’ll notice.

So, in order that’s:

But no English sides, this despite only Chelsea topping their group, and only Manchester City heading into their final game with qualification certain.

But what about Wolfsburg, eh? Bloody foreigns.

Love me Tendayi
Writes John Cross in the Daily Mirror: ‘Burnley starlet Tendayi Darikwa is being lined up as the next Dele Alli.’

Tendayi Darikwa is a 23-year-old right back or right winger; Dele Alli is a 19-year-old central midfielder. Is every lower-league player ‘the next Dele Alli’ now?

Through the filter
“We have been in touch with Arsenal. There has been no feedback [or bid] as yet though.” – Klay Ekeocha, agent of promising Nigerian youngster Kelechi Nwakali.

Force that through the Metro Sport filter, and what do you get? ‘Arsenal in transfer talks to sign brilliant No 10’, of course.

Aston Villa’s Jack Grealish has been forced to train with U-21s after being caught enjoying himself a bit too much https://t.co/u41GxZxvWM

Recommended reading of the day
Matt Clough on the forgotten genius of Don Revie.

Thanks to today’s Mediawatch spotter Kieran Harrington. If you spot anything that belongs on this page, mail us at theeditor@football365.com