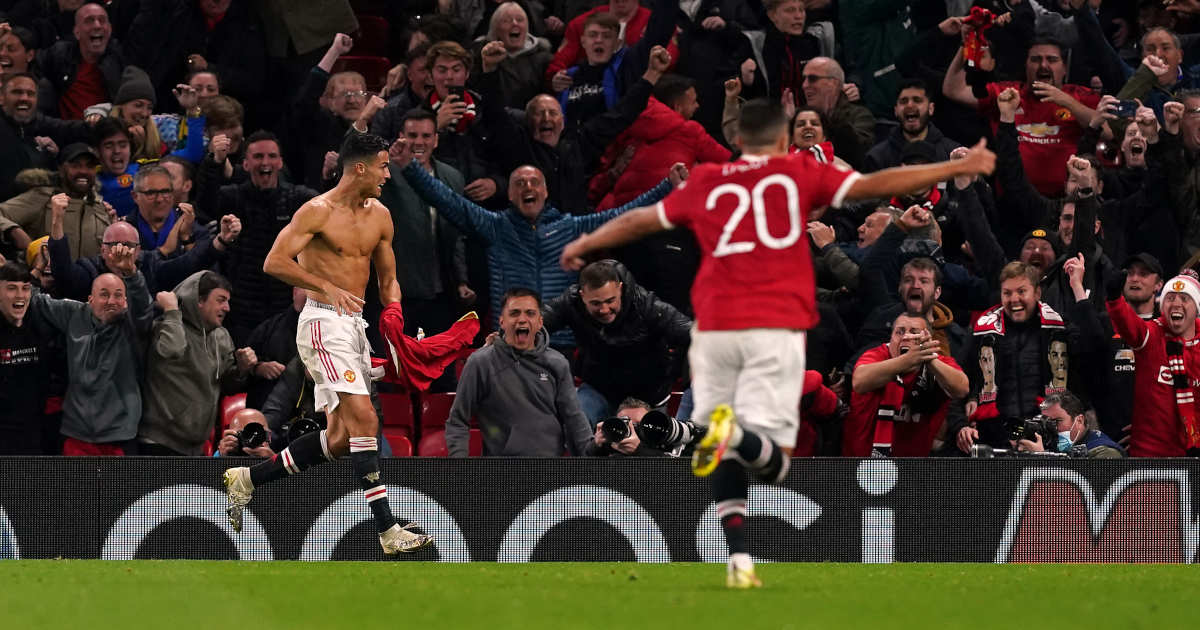 The back pages are preoccupied with Cristiano’s torso, but they’ve still got questions for Ole that don’t involve Ronaldo.

Not only is he back, but he’ll be back too
Considering what happened at Old Trafford on Wednesday night, it was surprising to see the match largely ignored by the tabloid press on Thursday morning in favour of… only kidding. Of course he’s splashed all over the back pages, shirt ripped off, muscles rippling, nip- [redcated].

Ahem. Now, where were we? Ah yes, it is actually striking how much of Thursday morning’s back pages are devoted to CR7’s torso, with the Daily Mail‘s picture arguably being the most disturbing since it makes him look like a Terminator tribute act who’s had a shoehorn implanted into the side of his neck.

Indeed, the Mail gives up so much space to this frightening image that it can only manage 52 words on the match itself before ordering us inside for more. Once we turn inside it becomes clear that they’ve got two reports going on, one written by Chris Wheeler at Old Trafford and the other written by…

It just had to be Martin Samuel
Yes, the Mail’s Chief Sports Writer was at Old Trafford, apparently with a thesaurus on his desk opened at the page for alternative phrases to use in place of ‘he’s done it again’.

‘IT JUST HAD TO BE HIM…’ shouts the headline, while Martin Samuel opens with ‘He did it again’. But he isn’t impressed. ‘But a win?’, asks Samuel, ‘How did that happen?’. Well, Martin, you tell us. That’s your job.

And he does, over an exceptionally long report. There are times when he goes off-piste a little, including a short paragraph about ice hockey in which he compares Ronaldo to Wayne Gretzky, but on the whole Samuel has familiar reservations about Manchester United under Ole Gunnar Solskjaer. ‘This was another one of those United wins that appears to have unfolded without any great plan’, he notes, adding that, ‘The [Young Boys] game changed because Solskjaer removed Ronaldo. This changed because he didn’t.’

But one point that Samuel mentions does raise an eyebrow, when discussing Ronaldo’s late, late winner. ‘His shot was actually palmed into the net by the goalkeeper Geronimo Rulli. Would it have gone in anyway? That’s hardly the point.’

Well actually, Martin, in a way, it is, because those back pages might have looked somewhat difference had they been talking about a stoppage-time own goal by the Villarreal goalkeeper rather than you know who, and if the shot was ‘actually palmed into the net’ by the goalkeeper and wasn’t ‘going in anyway’ it probably should have been counted as an own goal, shouldn’t it?

And it may seem like a trivial aside, but Mediawatch is also troubled by the fact that the Villarreal goalkeeper’s first name is Geronimo and that this passed unmentioned. Had the talk been of an own goal, his name would have been perfect for back-page punnage (‘GERONI-OH-NO’, etc, you get the picture), but that was never going to happen. There’s another lame joke that could be made about his name, and when we consider the tabloid tendency for out-of-date cultural references (see below), failing to mention this anywhere also feels like something of a missed opportunity.

The late, late Custis show
All the tabloids have brought out their big guns for this match, and in The Sun that means…NEIL CUSTIS!

Neil is a little more forgiving than Martin of Ole’s tactical *checks thesaurus for the opposite of ‘masterclass’*, proclaiming that ‘Cristiano late show eases pressure on under-fire gaffer’. But the tone of the reporting would seem to indicate that there has been no ‘easing’ of the ‘pressure’ on Ole at all.

‘Questions are starting to be asked’

‘What a moment, what a smash and grab, get out of jail win’

‘The half-time whistle was greeted with silence’

‘It needed to be better than this’

A win’s a win, Neil, but this doesn’t sound like the easing of ‘pressure’ on the ‘under-fire gaffer’ at all.

But like Martin Samuel, Custis is less than impressed with United’s overall performance. ‘Solskjaer continuously belies the slow starts his team produce – but they aren’t responding to his pleas to get on the front foot’, he writes, before asking, ‘Would the second half get any better?’. Well, that depends on what you mean by ‘getting better’, Neil. The result was ‘better’, in that it was goalless at half-time and they ended up winning, but the performance wasn’t really. (He doesn’t answer the question himself.)

And he finishes off by saying, ‘There would always be one more chance, there is always one more chance when it comes to United.’ Well, West Ham might have something to say about that, and Aston Villa might want to add that even if this is true (it isn’t), sometimes those chances don’t get taken.

Tell us about Telles
Contrary to what you might believe from a cursory glance at Thursday morning’s back pages, Manchester United did have ten other players on the pitch at Old Trafford, and one of them scored a magnificent goal.

Alex Telles has been something of a bit-part player for Manchester United since he signed for them from Porto in October 2020. He only played nine games for them last season, and his only other appearance this season came in their League Cup game against West Ham last week.

In a sane world, Telles would be splashed all over the back pages for a 20-yard angled volley that picked its way through a packed penalty area and into the bottom corner of the goal. This was, after all, a moment of magic from a player who would have been unfamiliar to many viewers.

Telles, however, doesn’t have the clout of that other guy (no, not Geronimo Rulli), so he is squeezed into a couple of brief paragraphs in the match reports. Mediawatch would fully understand if he looked at the sports pages and felt a little short-changed. But then again, Mediawatch somehow doesn’t think he’ll be the only United player who’ll feel that way this season.

The Sun *hearts* the 1990s
It is not very common that Mediawatch has praise for the tabloid newspapers, but we can only doff our cap in the direction of The Sun’s back page headline-writers for a triumvirate of brilliant headlines:

‘BOSH AND PECS’ (the main headline, next to a near-pornographic photo of you-know-who)

One of Mediawatch’s absolute favourite tabloid tics is their tendency to fall back on cultural references from the dim and distant past. Are blue rinses even still a thing?

When paying for pain isn’t paying for pain
Moving away from the Champions League, The Daily Star has a report on comments made by Manchester City’s Ruben Diaz ahead of their match against Liverpool on Sunday.

‘KOP WILL PAY FOR OUR PAIN’ shouts the headline, with more than a hint of Arnie.

So, was Diaz sitting opposite the reporter dressed in a figure-hugging robot costume? Did he take a break at any point and, as he was leaving, turn around to say ‘I’LL BE BACK’? Probably not, so what did he say?

Well, he didn’t mention ‘pain’ at all, and in fact… he doesn’t say anything whatsoever that could even be generously described as ‘Kop will pay for our pain’. The nearest that he comes to saying anything like this (and this is the only mention of Liverpool that makes it into the actual piece) is:

“We know what we need to do at Anfield to win.

“The major focus is on Sunday’s game at Anfield amd that it where our energy will be.”

And… that’s it. That’s what he says about the match on Saturday. No Terminator references, no threats to gun down Mo Salah should he burst through on the City goal, just a bland and inoffensive quote about their next match, against title rivals, being quite important. Ever was it thus, and on that note, this wraps up Mediwatch for another day. Hasta la vista, papers.