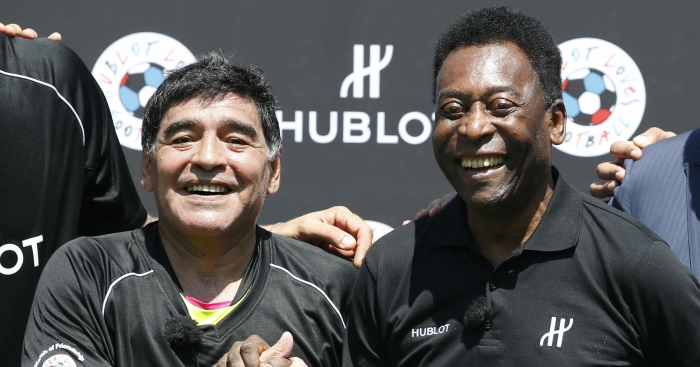 Stay on your feet
You will surely have heard Ray Wilkins’ latest rant by now. The greatest assistant manager in the history of the game celebrated the anniversary of the EU referendum in the only appropriate way: by championing the virtues of a British player over a foreign one.

Wilkins directed his ire towards Chelsea and prospective new signing Tiemoue Bakayoko on talkSPORT, and had some points to make.

“I was really disappointed to read they are looking at Bakayoko from Monaco. He is 22, French and doesn’t get near the national side, but it was quoted Chelsea might be paying £32m.

“Well, in Nathaniel [Chalobah] they have a footballer who can play exactly the same but just needs an opportunity.”

It is at this stage that it must be pointed out that Bakayoko has one international cap to Chalobah’s zero. And the former is competing for places with Paul Pogba, N’Golo Kante, Blaise Matuidi, Adrien Rabiot, Geoffrey Kondogbia, Morgan Schneiderlin and Francis Coquelin (…) among others. The central midfield options in the latest England squad, and therefore those chosen ahead of Chalobah, were Eric Dier, Jake Livermore, Alex Oxlade-Chamberlain and, apparently, John Stones. “Doesn’t get near the national side” seems a bit harsh.

But Wilkins is not done. On Chalobah, he adds:

“You’ve seen already in the three games he’s played [at the U21 Euros] he looks a class act in and among people of his own age.”

Perhaps therein lies the problem, Ray? Chalobah might look impressive “in and among” players of his own age, but Bakayoko featured prominently for Monaco as they won Ligue Un and reached the Champions League semi-finals. And he is only four months older than his Chelsea counterpart.

Chalobah would surely improve with more game time, and bemoaning a lack of opportunities for young English players is an understandable stance. But surely anyone can see that Bakayoko has achieved considerably more in four seasons as a professional than Chalobah has in five?

Que, Salah, Salah
The British media seemed to struggle with the nature of Liverpool’s purchase of Mohamed Salah on Thursday evening, in that his initial fee of £34.3m is not a club record, but it could become one if the criteria for the £5.7m worth of add-ons is met.

Some could not cope, including the Daily Mirror who claimed that Liverpool had agreed ‘a record-breaking figure that could eventually rise to £39million,’ which will ‘shatter’ their current record fee of £35m. ‘Shatter’ is a bit strong for a potential £4m rise; crack seems more accurate.

The Daily Mail declare Salah’s arrival as a ‘club-record signing,’ before adding that the fee ‘could rise to £39million’. And if, as is possible, it doesn’t?

But the crown goes to Sky Sports, whose own sources just manage to confuse them. ‘Liverpool have completed the signing of Roma forward Mohamed Salah on a five-year deal, with the fee rising to £34.3m’. So what’s the initial fee?

Mo money, Mo problems
Are you still waiting for the hottest take on Liverpool’s newest signing? Well wait no longer, because talkSPORT have you covered.

You see, talkSPORT have noticed two things: Salah cost a fair bit of money, and football stories should only ever be galleries for maximum clickage. Combine the two, and the result is thus:

You can imagine the disappointment etched on the face of Mediawatch when none of Willie Groves, who joined Aston Villa for £100 in 1893, Bob Kelly, who moved to Sunderland for just over £6,000 in 1925, or the legendary Jean-Marc Bosman were included.

If we are to be generous to talkSPORT – and we are nothing if not generous – then the above headline is the shortened version used on the site. Their SEO headline is thus:

’10 brilliant players who cost less than the £34.3m Liverpool spent on Salah’

Palace theatre
‘Frank de Boer is ready to take charge of Crystal Palace. The Eagles have made the move following the decision of another of their targets, Mauricio Pellegrino, to join Southampton’ – Daily Mirror

‘Frank de Boer is set to be confirmed as the new manager of Crystal Palace. The Dutch legend, 47, was chairman Steve Parish’s first choice to replace Sam Allardyce’ – The Sun

So De Boer was either Palace’s ‘first choice’ to become manager, or just one of ‘their targets’. Guess which newspaper’s chief football reporter is a fan?

Head over heels
Mediawatch has been left a little confused over the Daily Mirror‘s claims that Malaga are ‘digging their heels in’ over the deal which will see striker Sandro Ramirez join Everton.

‘Everton are becoming increasingly frustrated at the red tape which is blocking their capture of Sandro Ramirez,’ reads the first paragraph to the story, which adds that the Spaniard has ‘agreed to join them for a little over £5million.

‘A little over £5million’ of course translates to £5.25m, Ramirez’s release clause, which Everton are widely reported to have met. No matter how hard the La Liga side digs their heels in, there isn’t a great deal they can do about that.

Reports in Spain on Friday added that the deal is unlikely to be formally announced until Spain’s participation in the Under-21 European Championship is over. Which sounds less like like Malaga are ‘digging their heels in’, and more like Spain don’t want any distractions during a major tournament. Spoilsports.

Unexpected headline of the day – the runner-up
‘Alexandre Pato thinks Jurgen Klopp is living in his knee’ – 101GreatGoals.

Recommended reading of the day
Jonathan Wilson on Mohamed Salah.