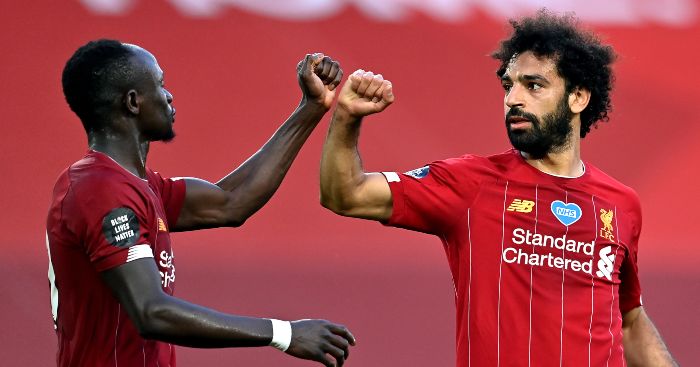 When Liverpool striker Mo Salah opted not to pass to Sadio Mane and instead shot wide against Burnley in August 2019, neither man could have foreseen the consequences lasting into October 2020.

It provided ammunition for many people to question Salah and leap on any and every similar incident involving the Liverpool teammates, including this rather unsavoury clash against Sheffield United.

That really is quite difficult to watch. Remarkably upsetting scenes.

Garth Crooks seemingly agrees and is even picking sides, choosing Sadio Mane in his BBC Sport team of the week.

‘Mane had a header saved which rebounded for Roberto Firmino to score the equaliser against Sheffield United. He then produced a wonderful cross for Diogo Jota to score the winner. However when the ball came to Mohamed Salah with Mane well placed alongside him the Egypt international chose to go it alone and hit the post.’

Jurgen Klopp has surely fined his most potent striker for shooting from six yards.

‘When Mane politely protested, Salah gesticulated that he had to go for the shot. No he didn’t. A pass to Mane and Liverpool would have gone 3-1 up.’

He hit the post. Liverpool still won. Everything will be alright, Garth.

One suspects that Salah, with 81 goals in 127 top-flight games, will probably be fine just carrying on as he is. That Crooks has ‘seen him sacrifice his team-mate before for glory’ just makes the fact he has registered double figures for assists in each of his Premier League seasons at Liverpool all the more impressive.

But yes, Salah ‘needs to be careful’, lest Mane ‘politely protest’ again during a Liverpool win.

Quite enjoy the implication that Sheffield United *could* start feeling sorry for themselves if Garth Crooks didn't like them. pic.twitter.com/tVJeMggzB6

Mediawatch appreciates the sentiment and agrees entirely with Paul Jiggins’ assertion that Sean Dyche probably ‘should have jumped ship earlier’ from Burnley. But this seems a little over the top:

‘The danger for Dyche is, despite his reputation, if he fails to save them from the drop again, they could end up taking him down with them and he might never get a top flight job again.’

Steve Bruce is a current Premier League manager. Nigel Pearson had a top-flight job in July. Alan Pardew last coached in the division in 2018.

Dyche will probably be alright.

Not only does this Daily Mirror website headline make no sense…

…but it is also obvious bunkum. Those who doubt that Maguire would so publicly criticise the manager of a direct rival team in the current circumstances are right to be suspicious.

And on that note…

That Maguire story sits nicely atop the Mirror’s website, inexplicably above this absolute bombshell:

For ‘Real Madrid coaches’, read ‘people closely linked to’ the Real Madrid youth system, according to AS. For ‘reluctantly admit Man Utd have a real talent on their hands’, read:

“Alvaro is a footballer with a great future who has been hurt by having Miguel Gutierrez in front of him. But the conditions for him to do well in England, he has them, his pace and his centres will be appreciated there.”

And that, ladies and gentlemen, is how to turn 42 pretty bland words from a nameless source into a click-friendly story that implies Real Madrid have had to unwillingly accept losing Alvaro Fernandez to Manchester United rather than them simply deciding not to extend his contract after unsuccessful negotiations. A Jake Polden masterclass if ever there was one.

‘Arteta’s appalling win ratio at Arsenal WORSE than Ljungberg and Emery and Spaniard has second-worst record since WWI’ – February 3.

A message to The Sun website: no matter how many times you recycle the feature, Emery still inherited a side that finished sixth and took it to ninth after spending £210m, while Arteta was put in charge of a mid-table mess and has already won an FA Cup.

What’s worse: calling Jordan Henderson a ‘shock’ possibility at centre-half considering he’s played there about as often as Fabinho for Liverpool, or calling Kevin Phillips a ‘pundit’?