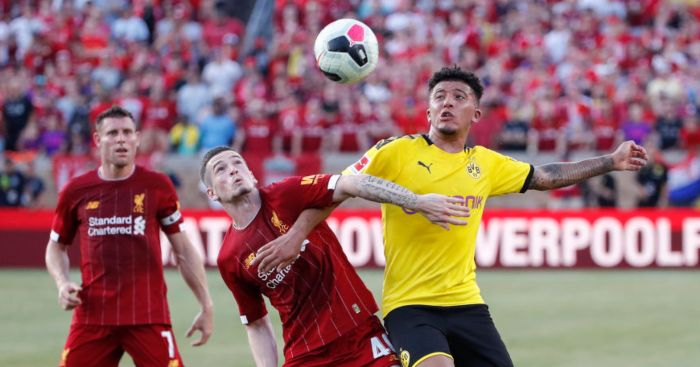 The Sun are absolutely desperate for Jadon Sancho to sign for Manchester United. They have apparently not embarrassed themselves enough this summer, claiming on Wednesday that ‘talks are ongoing’ over a deal they pretty much insisted was done last month.

It is almost as if their former chief football reporter has been working alongside Ed Woodward in a PR adviser role since January. Almost.

‘JADON SANCHO believes he WILL be a Manchester United player before the transfer window closes on Monday.

‘The England winger, 20, wants his top advisors to “pull out all the stops” to secure his move to Old Trafford from Borussia Dortmund.

‘Sancho was left out of the Dortmund squad for the German Super Cup clash with Bayern Munich on Wednesday.’

With a respiratory infection, yes. You seem to have missed that part out. How unfortunate.

‘And Ole Gunnar Solskjaer is growing increasingly confident he can land his No1 target before the deadline.’

Perhaps you should inform your esteemed colleague Neil Custis, who reports that Manchester United are pursuing Ousmane Dembele because they ‘are struggling to get the deal for Jadon Sancho from Borussia Dortmund over the line’.

‘Talks with Barca progressed on Wednesday as hopes faded of getting No1 target Sancho before Monday’s transfer deadline,’ says the same newspaper that reports Solskjaer as ‘growing increasingly confident’ of signing No. 1 target Sancho on Wednesday.

If you throw enough sh*t…

The back page of the Daily Mirror informs us that ‘SPURS ARE RILED BY X-RATED KANE JIBE’.

Considering Maccabi Haifa chief executive Assaf Ben-Dov attended a pre-match press conference on Wednesday to issue an apology to Harry Kane for what Jose Mourinho later described as “the funny video”, it seems unlikely that Tottenham are all that bothered.

Indeed, Matt Doherty hadn’t even seen the clip before he was asked whether it could be used as an added incentive to win.

“Oh really….Definitely you can use that. We are pretty motivated as it is,” was his response. “I guess you can use that as something a little bit extra to show them who the bosses are here. It is something that might get mentioned but I have to see the video first of all, I will have a look after this.”

A player “guesses” that “it is something that might get mentioned”. Put that through the tabloid machine and you get ‘Matt Doherty has warned Tottenham could use an X-rated video as extra motivation for their Europa League tie with Maccabi Haifa’.

While The Athletic have busied themselves by producing the single most international break piece of content ever written outside of an international break – West Brom above Leeds is very funny – the Liverpool Echo must be confused at the notion of Liverpool not being named ‘England’s biggest club’.

So much so that they felt compelled to commit this headline to virtual print:

‘Why Bayern Munich are mimicking Liverpool, not the other way around’

By winning the Champions League a year after them? The copycats. Although the actual point is that Liverpool have not based their high defensive line on Bayern Munich’s approach. The Reds won more free-kicks last season due to offsides than Bayern Munich so have that, Gary Lineker.

Blindingly obvious and clearly going down the @FCBayernEN route, but yes, interesting to hear it from the man himself. https://t.co/EmoCV41Hgd

Of course, both are ‘mimicking’ Pep Guardiola’s Barcelona, who in turn ‘mimicked’ Arrigo Sacchi’s AC Milan, who derived much of their approach from the ideas Rinus Michels implemented with Ajax, Barcelona and the Netherlands.

It turns out you can trace pretty much every tactic back to their origins decades ago and so suggesting any manager or team is copying someone else is fairly pointless. Liverpool did not invent the concept of a high defensive line. But they are definitely brilliant and absolutely everyone wants to be them.

League Cup of their own

‘THERE was a big reason Jose Mourinho was so effusive in his celebrations after Tottenham beat Chelsea on penalties to reach the last eight of the League Cup,’ writes Neil Custis in The Sun.

Was it beating one of his former clubs on penalties after equalising in the final ten minutes?

‘He knows what the little-loved competition can do for a team, particularly one he has just taken over.’

It was probably more beating one of his former clubs on penalties after equalising in the final ten minutes, to be honest.

Still, Ole Gunnar Solskjaer ‘should take this competition very seriously’ is a piping hot take about a manager that has just reached the last eight. It would be pretty strange if he just sacked it all off now.

And there we all were thinking Manchester United’s only signing of the summer, a player they bought for £35m who has been good so far this season, would NOT get more chances in the most compressed fixture schedule the Premier League has ever seen.

Liverpool face Arsenal in the League Cup on Thursday and the Daily Mirror add some fuel to the fire.

Go on then, what is this huge story in the month and year of our Lord October 2020?

‘Back in 2015 Roberto Firmino signed for Liverpool.’

That’s not a promising start. ‘Something happened five years ago’ seems like the opposite to ‘news’. Liverpool putting ‘a rather bizarre clause’ in Roberto Firmino’s contract in 2015 doesn’t feel particularly important in 2020.

But well played for a genuinely hilarious final paragraph:

‘Firmino has since penned a new deal at Liverpool, suggesting the clause no longer exists.’

There aren’t enough GIFs in the world of Alan Partridge shrugging his shoulders.

“I can’t give you any news. We are working with what we have got. If there is any update, we will let you know. I don’t comment on other teams’ players. Sometimes speculation is there and we can’t control that.”

It is technically talking transfers. It is also the exact opposite.