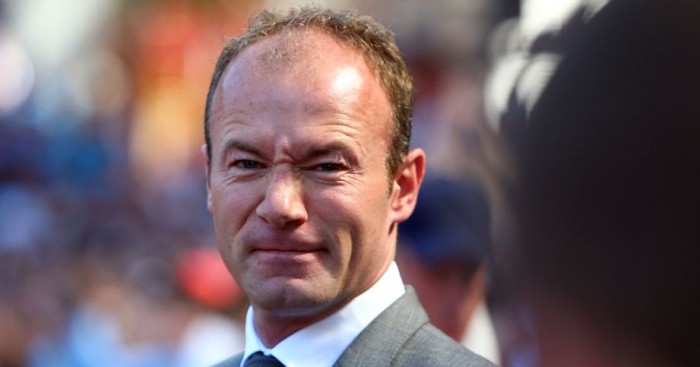 The real story
Number of mentions of ‘Ronaldo’ on the MailOnline football homepage: 71.

Shear idiocy
Many of you will have read over the weekend – in the Telegraph’s pages – that ‘the Football Association is intent on appointing an English successor to Roy Hodgson as England manager with Sam Allardyce and Eddie Howe the leading candidates for the job as the governing body prepares to make its decision’.

One man who missed this news is Alan Shearer, who is full of utterly misplaced righteous anger in The Sun.

‘THE FA constantly talk about wanting their own identity. They bang on about St George’s Park and our need to develop the standard and quality of our coaching.

‘So how on earth can they consider appointing a foreign manager?’

Erm, because not even considering the vast majority of football managers in world football on the grounds of nationality would amount to gross negligence. It’s called a ‘consultancy process’ because they have been consulted, Alan.

‘They are telling guys like Frank Lampard, Steven Gerrard, Rio Ferdinand and Jamie Carragher to get back into the game and get their badges.

‘Well Gary Neville and Gareth Southgate have both done that – and where has that now got them?’

‘In 2006, Germany had the balls to appoint Jurgen Klinsmann, who hadn’t managed at any level.’

‘Why do we need to look to Klinsmann when we would never have considered him in 2006 without his badges?’

a) England really would have considered Klinsmann in 2006 – after he had reached the World Cup semi-finals with Germany – when we instead appointed Steve McClaren and b) This literally makes no sense – there are a lot of people we would not have considered in 2006 that we should probably consider in 2016.

‘Why can’t we have an English guy to manage England?  It’s not like we have a long list of amazing foreign candidates who are available. It’s not like taking that path has worked before.’

Why can’t we have a foreign guy to manage England? It’s not like we have a long list of amazing English candidates who are available. It’s not like taking that path has worked before.

‘Fabio Capello had a great managerial record but had never worked in England.

‘He didn’t even speak the language and didn’t understand our mentality or history.

‘For Sven-Goran Eriksson, it was the same issue. He had never worked in England before he got the job.’

And yet Eriksson managed England to three successive major tournament quarter-finals. Does anybody want to hazard a guess at the nationalities of the managers who failed to get England to Euro 2008 or the World Cup in 1994?

‘The FA have been canvassing the opinion of former England players, including myself. They have spoken to the likes of Gary Lineker, Lampard, Gerrard and Rio. They say they want our ideas because we have played in tournaments. We know what it is like, know what it takes and know the mistakes we have made before.

‘But the call was about ticking a box. They wanted to be seen to be doing the right thing to appease those of us in the media and the press. Because I don’t get the impression anything I said was being taken on board.’

And yet, according to the Telegraph, ‘the consultancy process is now at an end with the three-man panel charged with finding the new England manager determined that the next man should be English, despite a lack of obvious candidates for the job’.

So they called you, they listened and it looks very much like an English manager will get the job. Did whoever called Shearer fail to say “oh wow, Alan, we never thought of that, you absolute f***ing genius”? Maybe it’s because you said…

‘Why wouldn’t they give it to Steve Bruce? He would be my pick.’

Well of course he would, Alan. Isn’t it nice to be given a column in the UK’s biggest-selling newspaper to tout your friend for a job?

‘Bruce has worked in English football all his life. He knows the game inside out and is widely respected.

‘He has played at the highest level with Manchester United.’

Bruce has also been relegated from the Premier League twice. No mention of that in Shearer’s column, bizarrely.

‘Alternatively, why not do what Germany did and give Lampard, Rio or Gerrard a go, with an experienced coach next to them? If anyone knows where we have gone wrong in the last few years, those guys do.’

The difference is that Klinsmann had won the World Cup and European Championship as a player; he knew how to win things. What you are proposing is the appointment of somebody who knows how to lose things on the grounds that they know how to lose things. Genius.

‘If the FA wanted to talk to me again, I would be happy to do so.’

Mediawatch suspects they will probably pass.

‘The 26-year-old recovered in time to propose to the ex-Page 3 girl, now a photographer.

‘And she made the announcement on Facebook last night.

‘The 30-year-old said: “Last night in the most perfect setting Chris asked me to be his wife. Ridiculously happy!!!!”‘

Oh and ‘the blonde bombshell has secured herself an England footballer husband’? Really? There was Mediawatch thinking that two young people (one a footballer, one a photographer) had decided to get married.

Consolation strike
‘IT MIGHT not be any consolation for Antoine Griezmann today, but he is my player of the tournament.’

We will stop you there, Jamie Redknapp; we are absolutely bloody certain that will be no consolation to Antoine Griezmann today.

How could they?
Martin Samuel writes extensively and passionately in the Daily Mail about the ‘disgrace’ of UEFA in suspending Mamadou Sakho when he tested positive for a drug not actually on any prohibited list, but he could not get to the end of his column without a ridiculous question to which there is an obvious answer.

‘How could UEFA allow this? How could an organisation find the time to rule on Wales players bringing their kids onto the pitch at the end of matches but be unable to quickly identify whether a supplement is illegal or not?’

Our best guess is ‘different departments’.

Five ridiculous headlines from far more successful websites
‘Has this Man United star just let slip that Pogba’s returning to Old Trafford?’ – Metro. No, no he hasn’t. The story is that ‘Man United star’ Antonio Valencia has followed Paul Pogba on Instagram. As he follows 1,241 other people too, Jose Mourinho is going to have one massive squad.

‘Cristiano Ronaldo celebrates Euro 2016 title with Sir Alex Ferguson’ – MailOnline. At a party? With a meal? No, he hugged him after the match. Oh. As you were.

‘Snapped: A moment all Man Utd fans will love…Ferguson and Ronaldo hug after Portugal win’ – Daily Star. Somebody has re-written the SEO guide to include a certain S word.

‘Arsenal’s Giroud and Koscielny show elite mentality and reject runners-up medals’ – Metro. As did the vast majority of the rest of the France squad. But don’t let that stop you getting ‘Arsenal’ in the headline.

Paint your wagon
Sky Sports tell us that Vincent Janssen will have a medical at Tottenham today (Monday) and yet according to Football Whispers, they of the ‘unique algorithm to rank transfer rumours out of five based on the likelihood they’ll really happen’ who have secured the hitched wagon of Sky, it is less likely to happen than Alexandre Lacazette to Arsenal. It’s almost like it’s all absolute b***ocks.

Recommended reading of the day
Michael Cox on Portugal.

If you see anything that belongs on this page, mail us at theeditor@football365.com, putting ‘Mediawatch’ in the subject field.