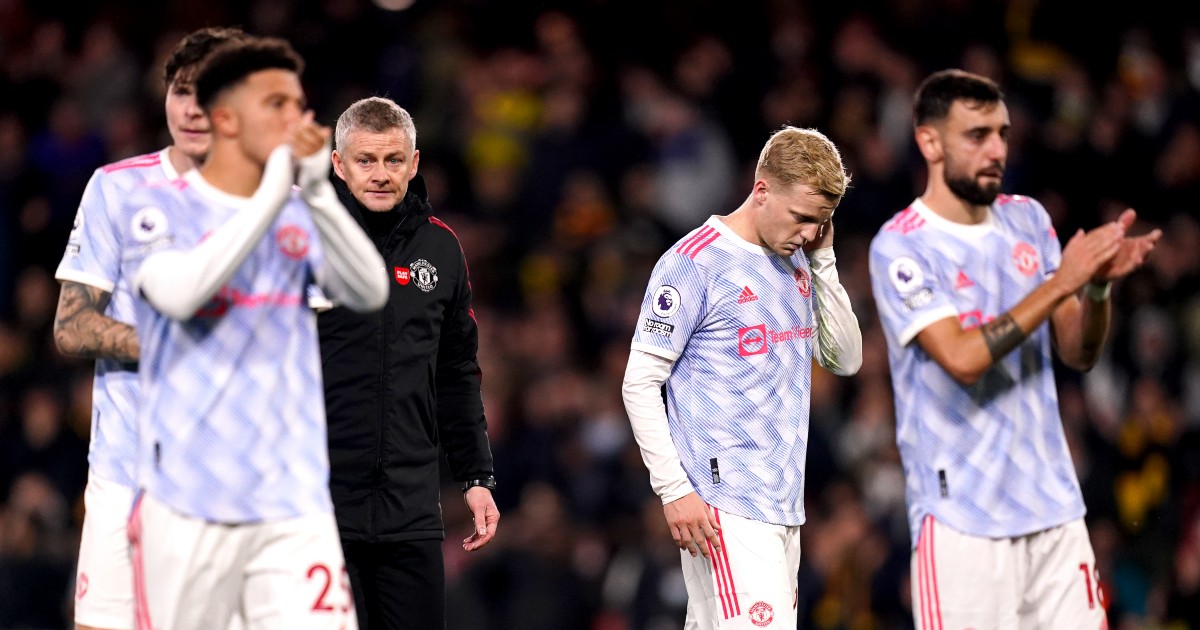 Manchester United players were ‘happy’ to lose to Watford as part of their ‘betrayal’. Ole Gunnar Solskjaer even had an apparent go at them.

Sol survivor
Everyone has seen the video. Some found it charming and personable. Others deemed it weird and pitiful. But there can be an almost unanimous agreement that at no stage did Ole Gunnar Solskjaer aim a ‘final dig’ at or ‘parting shot’ to his Manchester United players.

Yet Neil Custis heard the above and believed Solskjaer to have ‘rapped: You’re better than this’. And he does not mean that the Norwegian spat some sick bars at Luke Shaw.

Far be it for Mediawatch to suggest Custis is trying to manipulate Solskjaer’s words to suit his own agenda, but his column elsewhere in The Sun takes two paragraphs to declare that ‘a good man, a club legend was finally abandoned and betrayed by the players he trusted to wear the famous Manchester United shirt’ against Watford.

They should not, cannot and have not been absolved of blame but it feels as though losing five of seven Premier League games, including 5-0 and 2-0 thrashings by Liverpool and Manchester City, culminating in losing 4-1 to a relegation candidate, is at least as much on the manager as it is the players. He signs them. He picks them. He coaches them. The buck has always stopped there. Particularly when every other outlet is reporting the ‘inside story’ on misgivings over tactical naivety and potential favouritism of certain players.

The squad was apparently ‘happy to see their manager hung out to dry’, spurning their ‘chance to save the boss’, as if it is their responsibility to rescue a coach severely out of his depth.

‘Solskjaer knows what it means to wear the Manchester Unites shirt, sadly not enough of his players did,’ Custis concludes. ‘He is best off out of it.’

No arguments there. A lovely bloke, no doubt, but no longer qualified for the job he was required to do. And unless you want to pretend Cristiano Ronaldo, Bruno Fernandes and friends are ‘happy’ to lose to Watford at great expense to their professional pride, it is childish to pretend the players ‘abandoned and betrayed’ the manager. More foolish still is the attempt to claim Solskjaer publicly called them out because of it.

Jury duty
‘Yes, the boss had his shortcomings, which were clear to see when he was tested at the very highest level’ – Neil Custis, The Sun, November 20.

‘For many, the jury is still out on Ole Gunnar Solskjaer. It must be the longest trial of any top-flight manager in history… Now it is full speed ahead, with Solskjaer at the wheel. And it is right where he deserves to be’ – Neil Custis, The Sun, August 31.

Reckon the jury might have been right not to trust that remarkable ‘body of work’.

Ole good show
But this is the theme The Sun have clearly agreed upon: that the players contrived to get Solskjaer sacked as part of some Machiavellian plan of betrayal.

‘SHAME ON U’ screams the back page, with Solskjaer’s attack on his ‘Utd flops’ combined with Wayne Rooney claiming the players are responsible for ‘getting a club legend the sack’.

Then there is the Custis hit piece, followed by quotes from Tom Cleverley being framed as blaming the ‘underperforming stars’ and ‘accusing them of “ignoring the basics”.

If only they had someone to inform and remind them of said basics.

Again, plenty of blame will be apportioned to the players. But such attempts to paint Solskjaer as powerless and impotent is far more damning than some seem to realise.

Price of admission
‘Pep Guardiola admitted the managers of the Prem giants know they have to win after Ole Gunnar Solskjaer was axed’ – Martin Blackburn, The Sun.

Managers of the Prem giants knew they had to win long before Ole Gunnar Solskjaer was axed, fella. Guardiola himself said “[Solskjaer] knows – like I know – when you’re in charge of a team like United, City, Tottenham, like Chelsea, Arsenal, Liverpool, you have to win otherwise you’re in trouble”. It’s quite obvious.

Mail order
What Manchester United do next is of the utmost interest. Martin Samuel of the Daily Mail takes a look.

‘Where is the strategy here?’ he asks. ‘Where is the plan? If Pochettino is the No 1 candidate he was available between November 2019 and January 2021, or could have been approached in the summer.

‘Indeed, the only reason for an interim appointment now is because it would be thought close to impossible to get him out of PSG mid-season.’

Your very own back page seems to disagree.

Depth gauge
The main issue Solskjaer encountered at Manchester United was a ‘lack of squad depth,’ according to Ian Ladyman of the Daily Mail.

He writes that Harry Maguire’s ‘form and confidence have nosedived in recent weeks,’ yet ‘Solskjaer has been unable to give him the break he needs simply because he had nobody else of the required standard available’.

Feels like Solskjaer could maybe have identified and addressed that issue. But also you can’t say he had no choice but to play a half-fit and mentally drained Maguire when other options were available. Eric Bailly, a £30m centre-half, might actually be a decent and consistent alternative if given more than 45 Premier League minutes this season.

Unemployed man would not mind taking one of the biggest jobs in his field. More as we get it.