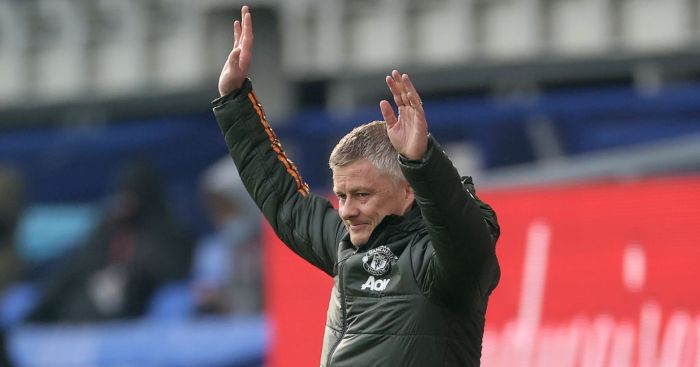 Every international break needs a story capable of dragging us through an interminable week of pointless friendlies and convoluted tournament permutations. Cristiano Ronaldo to Manchester United is the hero this time around.

It was The Sun who first suggested Ole Gunnar Solskjaer ensure Ronaldo’s return to Old Trafford to help with the troubled Mason Greenwood. A few days later, they bring us the ‘incredible theory’ as to why he would even bother.

Fortunately for them, it is all to do with Lionel Messi. And that excuses a URL that reads: ‘cristiano-ronaldo-man-utd-transfer-theory-messi. That is absolutely dripping in clicks.

The idea is thus: Lionel Messi will leave Barcelona when his contract expires next summer. He will join Manchester City. Ronaldo, in the hope of ‘sparking a fresh duel with his long-term nemesis,’ heads to United. Perfect.

What a shame that this ‘incredible theory’ – described elsewhere in the story as ‘outlandish’, which seems more accurate – doesn’t entirely explain why a 35-year-old would uproot his entire family to join a team in a different country that is currently 14th in their league. Nor how United and Solskjaer would afford it after baulking at the money involved in a deal to sign Jadon Sancho. Nor how City would afford Messi.

Aside from those slight bumps in the ‘incredible’ road, it sounds great.

Everybody get up singing…

The Daily Mirror website would rather deal in reality. Their top story, the biggest news in all of football a few hours after Scotland secured qualification to their first major tournament in more than two decades, is this:

Righto. It kind of feels like he should have fixed these problems before Ed Woodward’s backing, thus negating the need to be backed. But still. Carry on.

The first pressing issue that must be sorted is ‘Settling the number one debate’. Absolutely. It’s not as if David de Gea has started 83 consecutive Premier League games. Settle the debate, Ole!

Next is the ‘leaky defence’. We are told that ‘this will should be Solskjaer’s number one priority’. And it absolutely will should be. Although it (will) should be said that conceding six goals in seven games after the 6-1 defeat to Tottenham suggests it is actually being addressed.

Except no, because ‘it might take a blockbuster January signing’ to ‘sure up their backline’.

Two of the other issues are obvious, but with no simple solution: helping Greenwood and Paul Pogba return to some sort of form. But the last one is brilliant.

It feels a bit harsh to refer to that as a ‘problem’ that Solskjaer ‘has to fix’ when United are top of their Champions League group with more goals than all but four clubs and wins over the recent runners-up and one of last season’s semi-finalists.

A reminder that this story is top of the Mirror’s website at Friday lunchtime after the newspaper sent various journalists around the world to report on actual football the evening before.

If your first thought upon watching Dominik Szoboszlai launch a one-man counter-attack from inside his own half to score against Iceland and send Hungary to next summer’s European Championships was, ‘That fella reminds me of Georginio Wijnaldum,’ then congratulations. The Liverpool Echo consider you headline news.

”Welcome to Liverpool’ – Fans spot possible Gini Wijnaldum replacement after wonder goal’ is their holy grail of a headline that doubles up as reporting on the actual football while actually just being the transfer thoughts of a Twitter user with a few thousand followers.

Think we should be all over Dominik Szoboszlai as Gini Wijnaldum replacement!! Get it done @LFC 🙏 https://t.co/0Bbu6Wg4t1

Three retweets and one like? That’s enough for a reputable website to jump on your suggestion that Liverpool should replace a defensive midfielder with a far more attacking one. Who better to fulfil Wijnaldum’s reserved role than someone who scores ‘wonder goals’?

The newspaper’s northern football correspondent writes that the Reds ‘will be forced into the January transfer stampede’ in search of a new centre-half. He says the club ‘was already considering’ signing someone in the winter and names three possible targets: Ozan Kabak, Kalidou Koulibaly and Dayot Upamecano.

A few hours later, the same outlet publishes another story. This one is written by Darren Wells. It has those foreboding quote marks in the headline.

As you might have guessed, it comes from elsewhere. The Athletic, to be exact. They quote them as suggesting Upamecano, Kabak, Ben White and Gleison Bremer are potential options.

That story, the rehash of something from a different website, is placed much higher on the Mirror’s homepage than Maddock’s article. Both are reporting on Liverpool’s transfer plans. Both suggest Upamecano is their main target. Yet the one based on claims from somewhere else is given precedence over the actual journalism done by someone they employ. It really is just quite weird.

Not football news of the day

‘Wanda Nara shows off ample figure in gym gear working up a sweat on bike’ – The Sun website.

The only mention of Zlatan Ibrahimovic is in the line:

‘Moller – signed from Malmo in the summer – has been compared to fellow countryman Zlatan Ibrahimovic due to his talent and skillset.’