Home Mediawatch Why are Solskjaer and Pogba both ‘warning’ Greenwood? 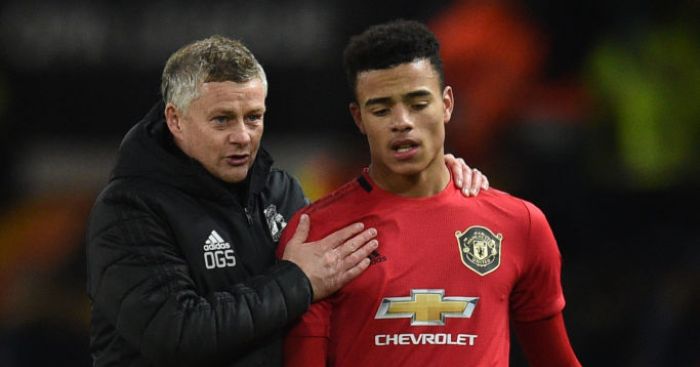 Mason Greenwood has scored in three straight games for Manchester United. But he is being ‘warned’ left, right and centre.

Hunky glory
‘THESE are just like the glory, glory days under Sir Alex Ferguson’ – Dave Kidd, The Sun.

Fifth, below Leicester, and 34 points behind the league leaders. It truly is uncanny.

Gloom for one more
‘Sweetness and light has broken out at Old Trafford after seven years of almost unremitting gloom’ – Dave Kidd, The Sun.

An FA Cup, League Cup, Europa League and finishing anywhere between seventh and second. Sure, it’s all relative, the football has not been this consistently good, nor has the future seemed so positive, for some time. But ‘almost unremitting gloom’? Come on.

Broken Mirror
Mind you, the Daily Mirror seem to believe that everything is still a bit sh*t at Old Trafford. There are three pieces of evidence on their website.

First is the fact that ‘Ole Gunnar Solskjaer fears Man Utd must be more clinical after Aston Villa win’.

“We are happy with the way we create chances but we need to be more clinical. We could have scored so many more goals.”

Next, ‘Paul Pogba sends Mason Greenwood warning after his man of the match performance’.

It seems like exceedingly poor timing. Greenwood is 18 and has just scored in three straight games and you’re giving him a telling off? Come on, Paul.

“Very good. Like I said before I enjoy to see them play in front. I enjoy this kid in training and in the game, and I will keep pushing him to be at the top. He has so much to do again, he can do even more, and what he is doing right now is just talent. And he’s showing he can play in this team.”

And finally, ‘Bruno Fernandes ignores warning after Ole Gunnar Solskjaer was told to “have a word”‘

…by Danny Murphy. Last month. Which leads to one of the greatest lines ever committed to print:

‘It seems the former Sporting Lisbon star isn’t taking Murphy’s advice on board.’

But how amusing that Manchester United become the first team in Premier League history to win four straight games by a margin of three or more goals, yet banal quotes from a manager, a player and a pundit are turned into ‘fears’ and ‘warnings’. Weird.

You’ve been warned
The Guardian get in on the act, too. What has Greenwood done to receive so many cautions?

‘Ole Gunnar Solskjær has warned Mason Greenwood he must “live his life properly” to reach his true potential after the teenager scored his eighth Premier League goal of the season to help Manchester United maintain their pursuit of a top-four finish.’

“He’s got to look after himself. I’m doing my bit to help him but he’s got to do it. He’s the one that’s got to turn in performances at training, in the games and to live his life properly. It’s all down to him,” sounds more like basic man-management and sound advice than a ‘warning’, but there you go.

Sim only
Danny Murphy might be more interested than most to read the expert take of Mark Halsey in The Sun:

‘It was clever play by Fernandes but I don’t think it was an act of simulation.’

He just happened to fall over clutching his ankle and screaming after stepping on Ezri Konsa’s leg. The Cambridge Dictionary literally defines the term ‘simulation’ as: ‘in football, the act of pretending to have been fouled to try to win a penalty or free kick unfairly.’ That’s pretty much precisely what happened.

Neiled it
Neil Custis was also on duty at Villa Park and noticed that ‘maybe now the environment is perfect’ for Paul Pogba to succeed.

‘He does not have to be the sole hero but more a part of what is turning into a very good team.

‘If that means Mason Greenwood gets the headlines again as he did at Villa Park then fine.

‘Still Pogba can be part of a United outfit that climbs back to the top of English football in the next two years.

‘If he can be, then after all, it will have been worthwhile.’

Spot on. Pogba is clearly benefiting from not carrying that burden of creativity entirely by himself. He is thriving.

We will stop mentioning it when an apology is issued. Promise.

The Jig is up
Now to Paul Jiggins of The Sun, reporting from the south coast. Over to you, kind sir:

‘It would be unfair to blame manager Jose Mourinho for their slump this season after he only took over in November – but he has hardly improved them, has he?’

No. And as the reported third highest-paid manager in football, it seems strange to suggest ‘it would be unfair to blame’ him for becoming the first Premier League team to ever fail to register a single shot on target against Bournemouth.

Howe do you do?
Jiggins seems to have considerably less time for the opposite coach.

‘You wonder what is next for Howe – apart from relegation, obviously.

‘Does he stay with the Cherries and try to pull off another miracle promotion – or does he cut and run?

‘Either way, his reputation will be tarnished and he will have to do a lot of work if he is ever to be mentioned as a future England manager again.’

There is indeed literally no precedent for the England national team ever appointing a manager that has overseen a side’s relegation from the Premier League in, say, his most recent job at club level.

It’s all about you
For a website literally named Liverpool.com, perhaps there should be no surprise at the desperation to view everything through the prism of one club.

But this headline really does take the piss:

And this is just baffling:

‘Klopp and Liverpool aren’t breaking any mould here by bringing young players through, but in the modern time and with this team arguably the best in the world right now, quite how he’s managing to do so organically and without pressure is frankly staggering.’

Klopp has given teenagers 105 Premier League minutes this entire season. They have barely played. The only thing ‘frankly staggering’ is how quickly you turned Phil Foden and Mason Greenwood being brilliant for two of your main rivals into a positive for Liverpool.

Except he doesn’t. Unless “I think he never really wanted to be that leader at Man United” is much more disparaging than it sounds. Which, on second thoughts, is perfectly possible considering the culprit.

Recommended reading of the day
Miguel Delaney on ‘past-it’ managers.