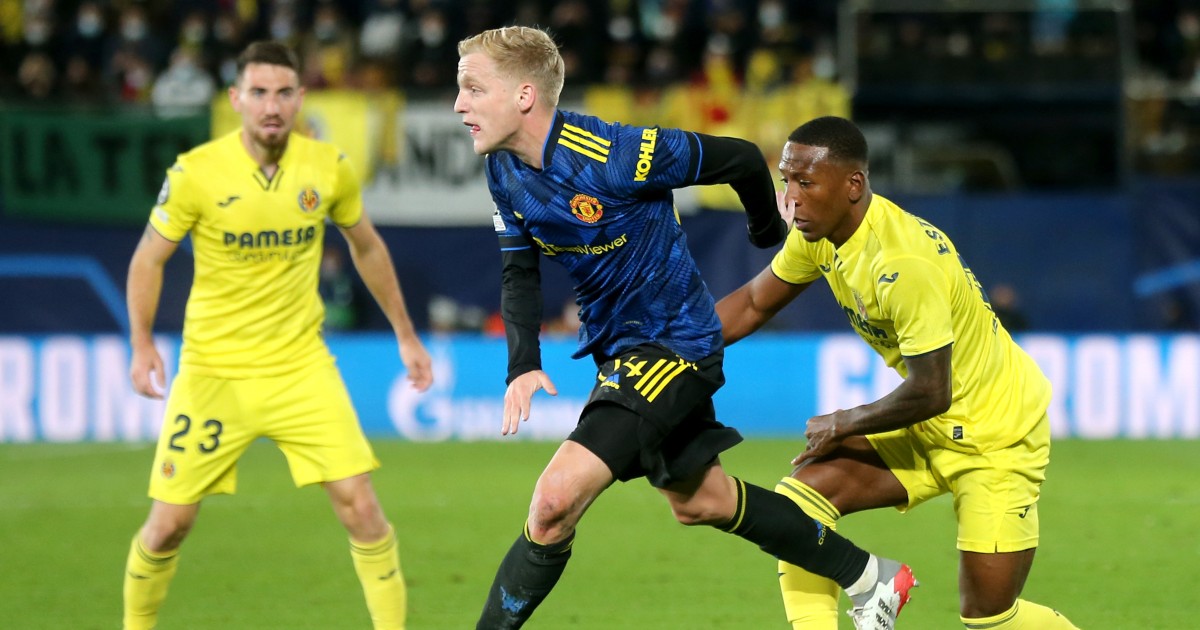 Donny van de Beek has started consecutive games for Man Utd once but a poor hour was enough to praise Ole Gunnar Solskjaer for ignoring him.

Cris the redeemer
Mediawatch has enjoyed the increased deifying of Cristiano Ronaldo since his return to Manchester United, from his banishing of desserts at Carrington to the ignorance of how his addition to the team has forced a substantial change in dynamic and tactics.

Neil Custis has been firmly aboard the CR7 train from the start, as his match report in The Sun attests:

‘Fred fired the ball off Capoue’s toe, bouncing it forward, and with the simplest of flicks Ronaldo lifted it over the advancing keeper.

‘Simple, but few could have executed it. ‘Viva Ronaldo’.’

Nine out of ten professional footballers would back themselves to successfully loft a bouncing ball into an empty net from 18 yards. But you keep telling yourself ‘few could have executed it’.

Beek off
Phil Thomas was also on Manchester United duty for The Sun, with a close eye kept on Donny van de Beek.

It is difficult to get across just how unimpressed he was with the Dutchman, who was ‘pretty anonymous all night’.

‘If this was supposed to be the game when Van de Beek laid down his marker, stuck two fingers up to the gaffer who never gave him a chance, then it was hardly a roaring success,’ he writes, adding ‘you really want a little more than that. A lot more, actually,’ while calling his performance ‘pallid’.

That replacement Bruno Fernandes came on to assist a goal and help inspire victory only spurs Thomas on. After all, the Portuguese ‘tends to produce something’ and ‘spark United into life…even on his off days’.

Just like at the weekend against Watford, when he played a part in the concession of a penalty, created one chance and threw a strop after losing 4-1. Van de Beek scored in that game despite only being given the second half.

See, Mediawatch can take one game out of context and extrapolate it beyond its meaning too. It’s pretty fun.

‘Let’s see how big the clamour is for Donny to keep his place at Chelsea on Sunday, eh?’ Thomas scoffs in his closing paragraph, having declared that ‘maybe Ole Gunnar Solskjaer had it right all along’ when it came to the midfielder.

That was Van de Beek’s third start all season, and seventh appearance of any kind. He started 15 of 61 matches last season and has only ever started consecutive fixtures for Manchester United once (against Southampton and Istanbul Basaksehir last November; both wins).

Maybe – and bear with Mediawatch here – footballers benefit from consistent opportunities in settled teams and systems, and having the odd start and substitute cameo here and there is not overly conducive to their development. Sixty-six underwhelming minutes (in a win) do not justify 18 months of mismanagement, nor should they overshadow the fact he literally scored a goal in a diabolical team performance four days ago.

Michael’s at the Wheeler
But the best take from El Madrigal has to be this:

Chris Wheeler, it should be said, writes no such thing. His final paragraph of ‘Whatever happens with United’s rather convoluted search for Solskjaer’s successor, Carrick will always have this,’ sums his thoughts up neatly.

But Wheeler does make one critical mistake by referring to how Carrick ‘dressed smartly in a suit and tie’.

And voila, you have a headline that makes him look pretty bloody silly.

Coach trip
And then there are headlines that underline how Solskjaer was always rubbish and Carrick and the coaching team were the stifled brains behind the operation.

Thank you, Manchester Evening News. Although it’s strange that Carrick and Kieran McKenna lobbied for Solskjaer to play three at the back sooner, before specifically not playing three at the back when given the chance.

Taking the Mick
Elsewhere on that website is this paragraph:

Yes. He has won one game and so can no longer be ‘just as responsible for United’s slide as Solskjaer’. After all, he tried to tell the bloke to change the tactics.

‘Mauricio Pochettino last night refused to rule himself out of the running for the Manchester United job’ – Daily Mail.

Were they at the same press conference?

Soft Tuch
It is a true shame that The Times did not send Henry Winter to Stamford Bridge on Tuesday evening. Oh, how he would have loved to have seen 22-year-old Trevoh Chalobah, 21-year-old Reece James and 21-year-old Callum Hudson-Odoi all impress from the start and score against Juventus, with 22-year-old Mason Mount and 25-year-old Ruben Loftus-Cheek rising from the bench as the Chelsea academy hammered an Italian giant in the Champions League.

Had Frank Lampard managed that feat, Winter would have been leading the calls for him to be immediately knighted. So, pray tell, is Roman Abramovich still the man who ‘shredded a club desire of nurturing youth’ in January?

‘It seems a statement about what he was trying to do, backing homegrown players, committing to those who gave most for the cause and almost challenging his successor, Thomas Tuchel, to keep the faith in youth,’ a forlorn Winter wrote back then. ‘Tuchel, it is expected, will pick the bigger names. He’ll go for results.’

Or he’ll just casually do both and then pay tribute to the “talented, humble guys from the academy” afterwards.

Cross trainer
At least John Cross of the Daily Mirror was at Stamford Bridge. Wonder if he still thinks Chelsea just decided to ‘hire a German to keep the German players happy in the dressing room’?

‘Chelsea were ahead after just 25 minutes,’ he writes. Does that still count as ‘just’?

‘Hakim Ziyech’s corner unsettled the Juventus defence and, when the ball deflected off Matthijs de Ligt, it appeared to hit Antonio Rudiger’s arm before falling to Chalobah, who smashed home from 12 yards.

‘VAR made a lengthy check but nothing was going to stop Chalobah celebrating.’

The Promise
‘Steven Gerrard is already fulfilling promise he made five years on from retirement’ – Daily Mirror website.

Did he pledge to restore Matt Targett’s form in 2016? Did he swear never to change his haircut? Have we missed something?

Nope. He said upon his retirement: “I still have a lot to offer the game.” That is the ‘promise’ he is ‘already fulfilling’. Gerrard truly is a man of his word.