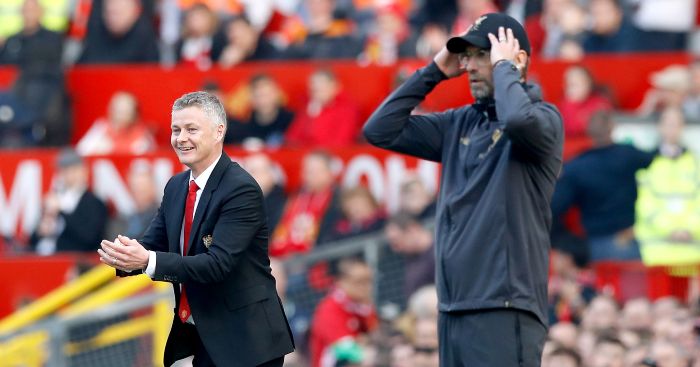 Ole Gunnar Solskjaer is warning David de Gea but loaning Dean Henderson out. And Liverpool have shown a ‘worrying change’.

Not that you’d know it, but each pertains to Ole Gunnar Solskjaer’s quotes on his goalkeeping situation at Manchester United. Or should that be the way he ‘cast doubt on the future’ of David de Gea?

So what exactly did the manager say that ‘warns’ only the Spaniard of any sort of imminent change?

“I think I must be the most privileged manager in the world with the goalkeeping department.”

You hear that, Dave? Your days are numbered.

“This season has shown how important Sergio has been for us. David has been performing there.”

Don’t let the door hit you on your way out, chief.

Hello, Dean, you’re a stupid head
David McDonnell can count himself lucky for he is not alone in interpreting those comments as a message aimed solely at De Gea. He is perhaps unlucky in that Neil Custis also heard those words from Solskjaer and decided he ‘will have to let one of his Manchester United keepers go’.

The insinuation is still that their highest-paid player with no apparent suitor will be the one to go. It is very much two plus two equals clicks.

Custis could perhaps have consulted his Sun colleague Alan Nixon, mind. His exclusive is intriguing.

Why would they pay all the wages of a player who has finally forced De Gea out of the picture?

‘But they are now talking tough when it comes to loan deals for [Henderson].

Well done for noticing they might just do the same thing that has worked quite well for the past two seasons.

Brute forced
While you’re here, Neil, are Manchester United still ‘close to landing’ Jadon Sancho? You reported ‘a breakthrough in negotiations’ last Monday when Borussia Dortmund were ‘forced’ to accept the same staggered payment model every club adheres to with such huge transfers.

It was only three days ago that Custis was stating Sancho ‘will cost a Premier League record at £110million’. As the winger boards a flight to go on Dortmund’s pre-season training camp, it certainly feels as such.

‘Pogba’s current deal at Old Trafford expires next summer but SunSport reported last month he was close to agreeing a new five-year extension.’

SunSport also reported in January that ‘PAUL POGBA’S Manchester United career is over with both player and club desperate for a parting of the ways’.

And that he ‘has been given the green light to leave’ in February.

And that ‘both sides want a splitting of the ways’ in March, when Pogba did ‘not fit the model’ of a young, hungry and humble team.

Even a broken newspaper is right twice a day.

Wrong Lewis
Liverpool can scoff all they like, but there has been a ‘U-turn’ that ‘shows worrying change’ in their transfer approach.

Are they exclusively targeting goalkeepers in their 30s and teenage talents with nothing in between? Has Michael Edwards grown so bored of being brilliant that he is sleeping during negotiations with those glasses that have eyes painted on them? Have they employed Daniel Levy?

Let Jake Polden of the Daily Mirror explain all.

You see, Liverpool ‘are not in the position to up their offer’ for Jamal Lewis, so ‘have moved on to signing an alternative’. Some might consider that sensible, bidding £10m for a player and walking away when the selling club demands twice as much.

That won’t do when you want to feed into the frenzied transfer panic of an entire fanbase, however, and so Virgil van Dijk and Alisson must be brought up. Liverpool, in both cases, ‘waited it out’ and refused to consider any other targets for the position.

So what if that was a first-choice centre-half and goalkeeper signed for record fees to solve problem positions in the starting line-up, and not a left-back to fill in when Andy Robertson finally gets a bit tired? This ‘U-turn’ is a ‘worrying change’ and that’s that.

The ‘brilliant’ Lewis, after all, ‘knows the Premier League’. And you’d hope so, having been relegated from his only season in it.

But Liverpool opting not to sign him – or ‘giving up on a first choice target to sign an alternative’ in Kostas Tsimikas – ‘is not what got them to where they are now, and again puts into perspective the impact the pandemic has had on the world’.

Or it shows that most clubs don’t sign obvious reserve players for £20m when other options exist. Ceding to the demands of relegated sides to get a back-up left-back for twice as much as Liverpool value him at ‘is not what got them to where they are now’. Being patient in attempts to sign world-class players is. Which category are you suggesting Jamal Lewis falls into?

Lamp shade
A belated happy birthday to The Athletic, who recently celebrated their first year taking over the world. Premier League Manager of the Season candidate Frank Lampard has been doing much the same: finishing fourth, losing a cup final to an Arsenal team in the midst of a relatively abject season and being knocked out of the Champions League 7-1 on aggregate. So they thought they’d write some lovely words about him.

It has been an unbelievable success all round, particularly as Lampard ‘didn’t need to take the Chelsea job’. Even though he would have looked awfully strange if he hadn’t accepted the free hit of a transfer-less season at a Premier League club that practically idolises him, after a single season in management performing to expectations at Derby.

The best part of the profile, though, is the start:

‘The Chelsea players have not seen Frank Lampard like this before. It is December 21, the eve of last season’s first meeting with Tottenham Hotspur and their new head coach is more animated than ever.

‘Like at all clubs, holding a meeting before a match to go over tactics and the opposition is part of the routine. But this is no normal game as far as Lampard is concerned, and that means no ordinary team talk.

‘Most of the individuals in the room have faced Spurs before, whether in the first team or as academy players and certainly are aware of the intense rivalry between the two London clubs.

‘But Lampard, who played in 30 games between Chelsea and Tottenham between 2001-14, still wants to make sure everyone appreciates just how important this is.

‘”Frank had given a lot of speeches ahead of previous games, but this was different,” an insider tells The Athletic. “He spoke with so much passion about what the fixture means, especially to the Chelsea fans. This was a contest they had to give their all in, leave nothing to chance, to leave everything out on the pitch. Everyone was inspired, everyone was fired up. They were all talking about it afterwards. And what happened? Chelsea won 2-0 in one of their best performances of the season.”

It sounds positively Churchillian. And certainly enough to make you wonder why he didn’t bother giving ‘no ordinary team talk’ or a ‘different’ speech before losing to a worse team in a cup final at Wembley. It’s almost as if it’s the kind of one-off thing Tim Sherwood could achieve.

Football365 shithouse headline of the day
‘Jordan hits out at ‘disrespectful’ Bale: ‘What’s the point, Gareth?”

The name is right there but somehow it’s still disappointing that it’s Simon Jordan.

There’s a ‘poised to’ missing between the first and second words there. What a dreadful oversight.

Recommended reading of the day
Paul MacInnes on Liverpool and xG.