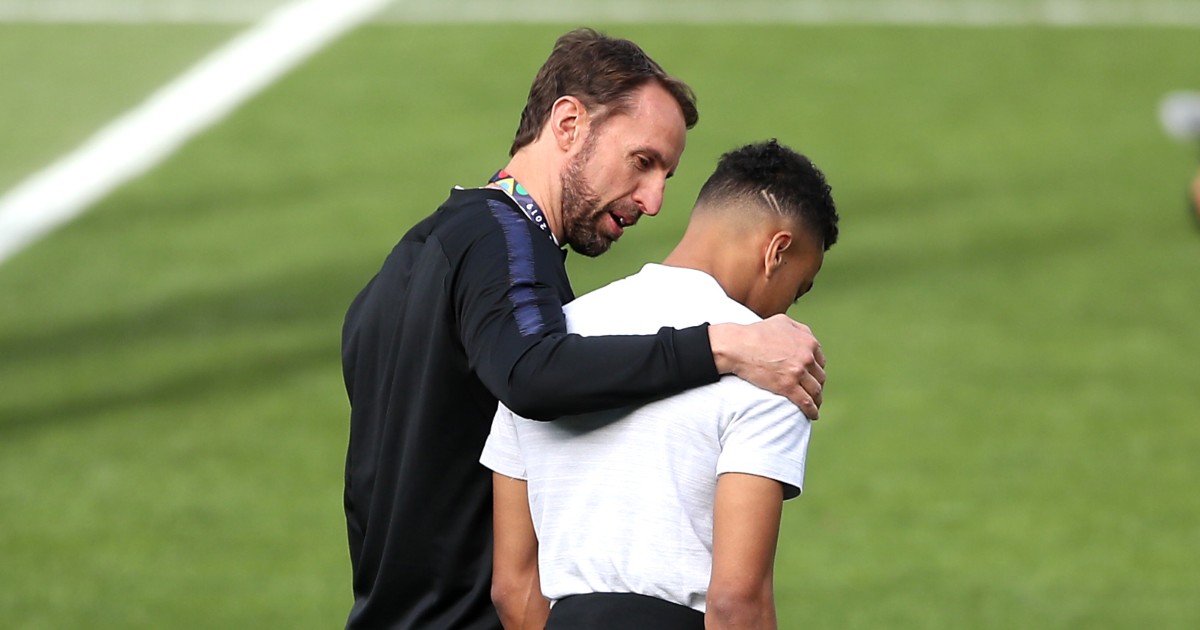 Gareth Southgate was apparently a real grump after he named his England squad for the Euros, which included a Trent Alexander-Arnold U-turn.

The joy of SIX
‘Gareth Southgate picked four right-backs in his 26-man England squad for the Euros – and claimed he would have happily picked SIX’ – John Cross, Daily Mirror.

‘Joked’. That is the word you’re after. Perhaps ‘quipped’. Probably not ‘bantered’. But absolutely not the uber-serious ‘claimed’.

Tetch 32
Andy Dunn is similarly at it in the Daily Mirror, who seem to enjoy ignoring the actual context of answers:

‘Southgate used the line about picking the best footballers to explain his selection, but the bald fact is that more than a quarter of the outfield players are full-backs.

‘And when asked about it, there was just a smidgeon of tetchiness in his response.

‘”I think we went through this last week,” he said.’

For those who doubt whether Southgate is indeed capable of any degree of ‘tetchiness’, decide for yourselves just how much this response is indicative of someone easily made angry, unhappy, or upset (Cambridge Dictionary definition):

In this of all weeks, why would you happily misrepresent parts of any press conference, never mind one that is readily available for the public to view?

Prickle juice
This attempt to paint Southgate as some sort of massive grump extends to Dave Kidd in The Sun, who writes:

‘Southgate had ignited a firestorm around Alexander-Arnold by leaving him out of the three World Cup qualifiers in March but is now prickly that the Liverpool ace has been at the centre of attention ever since.’

He is not ‘prickly that the Liverpool ace has been at the centre of attention ever since’. He likely expected such a reaction. He is, however, quite understandably ‘prickly’ at the media-fuelled idea he has an ‘agenda’ against one of his players.

As Southgate said on Tuesday: “I felt that there were stories that ran that were so far off the truth. I read stories about me that aren’t true but when it’s a player they may feel like they’re reading it so it may be true. Last night we were dealing with that, in the morning he’s taking set pieces preparing for tomorrow and then he’s reading that he is not going to the Euros.”

Strange that a journalist wouldn’t mention the bit where the manager is criticising that aspect of journalism. Why do that when you can imply he is ‘prickly’ that people were talking about Alexander-Arnold at all?

Journey South
Back to Cross, who overlooks Southgate saying he notified Alexander-Arnold of his Euros squad place three weeks ago to write:

He ‘did eventually pick’ the player that knew about his fate for a while despite most in the media suggesting he would miss out.

‘And he claimed they can all play in different positions.’

Well he said that a week ago, not on Tuesday. And again, ‘pointed out’ is more accurate than ‘claimed’ considering three of them have played in different positions for club and country this season alone, while Alexander-Arnold was a midfielder in his youth. This isn’t Southgate just pretending they’re versatile. 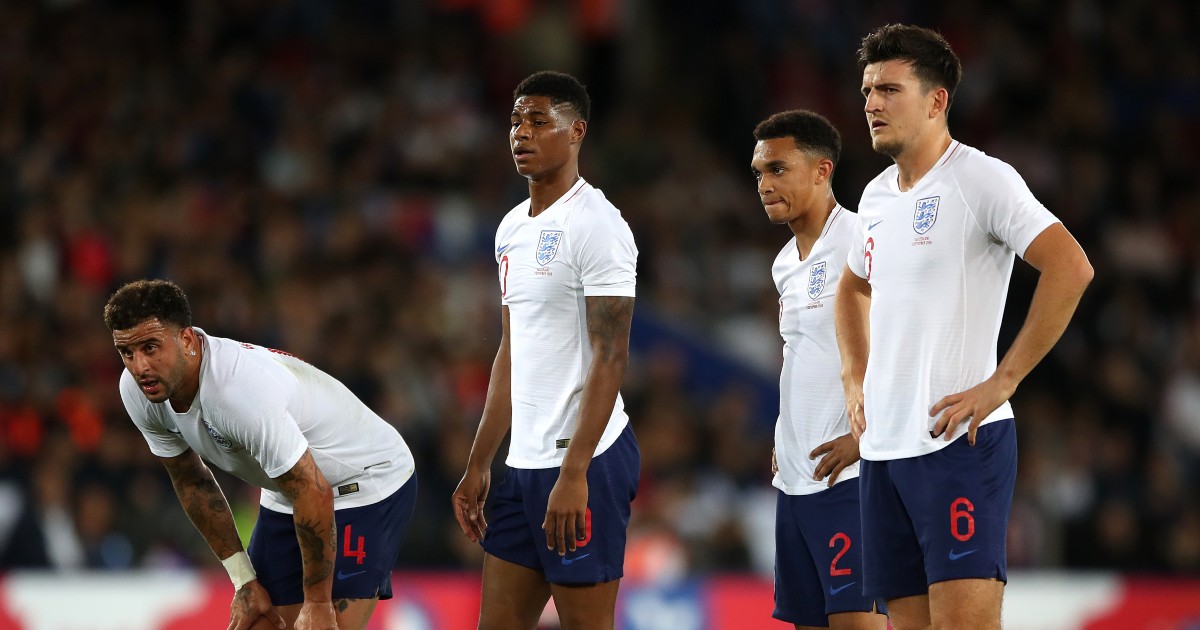 Nope and nope. Omitting a player from a squad in March due to relative poor form at the start of the season despite a slight improvement in the preceding months, before calling them up in June after a huge upturn in performances, is not a ‘U-turn’. It is good, fair management of an international team.

Saka potatoes
That Alexander-Arnold made his way into the 26 meant there was pretty much no real drama or shock, although that is not about to stop Ian Ladyman of the Daily Mail highlighting one huge omission:

‘Leaving out a player of known character and experience such as Jesse Lingard while including another young forward, Bukayo Saka of Arsenal, seemed a little strange. Maybe Saka’s versatility gets him in.’

What gave you that impression?

Southgate on Saka: "Firstly, he has performed exceptionally well for us and well in a team that has had a difficult season. Went into a team that had a tough season and played with really character and skill. Can play four or five positions and that is a plus." #AFC

If picking Saka over Lingard in the battle of players who will only feature in the third-place play-off is the most noteworthy ‘strange’ selection, it probably actually isn’t worth noting all that much.

Shaw thing
Saka might even feature against Austria on Wednesday, with Southgate ‘sweating over Luke Shaw’s fitness’.

The England manager made no such mention of any injury being carried by the Manchester United left-back but Jake Lambourne of The Sun has pictures and everything.

‘Man Utd star Luke Shaw sparks England Euro 2020 injury fears as he wears cast while out with girlfriend Anouska Santos,’ reads the headline. Those ‘injury fears’ have been ‘sparked’ to the extent that the only other website reporting on this is that of the Daily Mirror.

Shaw had a small cast on his wrist, basically. Or he was ‘caught by cameras with a cast on his left wrist while out with his girlfriend Anouska Santos in Altrincham town centre on Tuesday afternoon,’ because everything has to be salacious.

‘Ben Chilwell could now start for England against Austria, with Southgate hoping Shaw will be fit to face Romania on Sunday.’

Southgate will definitely rush Chilwell back to start a friendly against Austria despite him being one of the dozen players yet to report for England duty as of Tuesday evening due to involvement in major European finals. Even if Shaw is ruled out one might assume that Saka would fill in.

BREAKING NEWS
‘England boss Gareth Southgate admits he will be blamed if his side suffer a nightmare Euros’ – Charlie Wyett, The Sun.

And I just can’t hide it
‘Jack Grealish was so excited to make England’s Euro squad yesterday that he called his mum’ – Frankie Christou, The Sun.

Mediawatch expected players would be thrilled to receive a call-up but wow. The guy called his mum?! Ludicrous. Don’t get too excited, fella.

Recommended reading of the day
Martin Samuel on the England squad

Barney Ronay on the England squad

The Athletic on the England squad