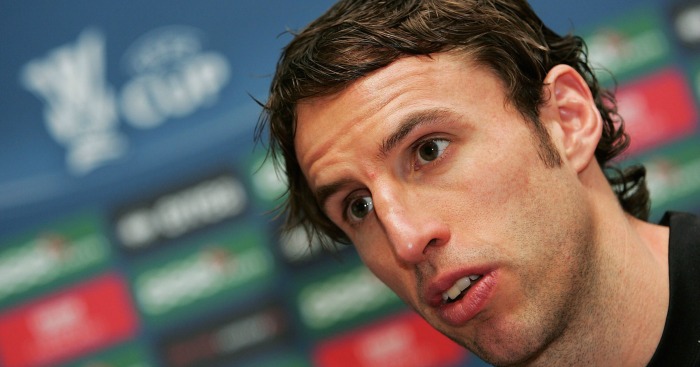 Journey of the day
‘The making of England boss Gareth Southgate: How a ‘posh’ boy who fancied a career in journalism survived jokes about his nose to make it all the way to manage his country’ – MailOnline. And the liberals have the gall to suggest that middle-class, heterosexual white boys have it easy.

Pot…meet kettle
As part of the Mail’s investigation into just how difficult it was to be a middle-class white boy in a cardigan, they have spoken to Dean Windass, who played with him at Middlesbrough and made jokes about his nose that he had to overcome:

“When he was captain he would organise the Christmas do, but would always be the sensible one. He never used to pay for it either, the greedy b******.”

That will be the Dean Windass who is currently involved in bankruptcy proceedings as tax officials say he owes more than £150,000.

The Ox and goose
‘Lions don’t need Wenger’ says the back page of the Daily Star. Oh wow. Just wait until Arsene finds out who dissed him.

Actual quotes from Alex Oxlade-Chamberlain (for it is he): “Everyone knows about Arsene and what a great manager he is, but right now there’s a lot going on and all I’m focused on his Gareth.”

Harsh
Here at Mediawatch we are not massive fans of Sam Allardyce. But this headline? On the back page of a national newspaper? Really?

Why didn’t you call me?
Actually, maybe it’s not harsh because, according to the Daily Star, Sam Allardyce ‘did not even bother to call or text Oxlade-Chamberlain to explain why he had been left out’ of his England squad last month.

As Oxlade-Chamberlain had not actually played for England since October 2015, are we assuming that Allardyce should also have called or texted Kieran Gibbs, Jonjo Shelvey, Phil Jones and Danny Ings, all of whom played alongside him in his last appearance against Lithuania. Actually, why the hell didn’t we get a call too? Clearly he should have called everybody English who was not in his squad; that he didn’t makes him worse than Savile.

Body of proof
It’s international week so the Daily Mirror website are promising us ‘PROOF that since Jurgen Klopp has joined Liverpool they’ve been better than Manchester United’. Is it that they beat them over two legs in the Europa League? Is it that Liverpool are actually above Manchester United in the Premier League table? Oh no, it’s ‘the alternative ‘Klopp table’ – marking just what the Premier League looks like ever since the German first breezed through the doors of Anfield on 8th October 2015′. And lo, Liverpool are a point above Manchester United. Definitive PROOF.

What they don’t mention in the headline: The table also provides PROOF that since Jurgen Klopp has joined Liverpool they’ve been worse than Tottenham, Leicester, Arsenal and Manchester City.

‘United will have the chance to put things right when they go to Anfield just after the international break, but Klopp will have his eye on extending that gap.

‘And perhaps making Liverpool’s presence felt at the top of the REAL Premier League table.’

How low can you go?
Still, at least they didn’t try and turn one league table in a 20-picture gallery.

No, because Arsenal have scored an impressive 16 goals and assists have been spread evenly around the team, with Alex Iwobi (3), Alexis Sanchez, Theo Walcott, Santi Cazorla (2), Hector Bellerin and Mo Elneny (1) all being credited. And only Sanchez has actually created more chances than Ozil this season.

Bob a job
Oh Brian Reade, merrily living ‘at the heart of football’ in the Daily Mirror. He is irked by new Swansea manager Bob Bradley saying he is “in and around” the level of “Klopp and Pochettino” and predicts that those words will come back to haunt him when his new team is ‘getting tonked’.

‘This is the man who has managed three sides outside the USA – Egypt, Stabaek and Le Havre – winning nothing.’

Yes, how embarrassing that Bradley only took Stabaek to ninth and then third in his two seasons in charge of the Norwegian side who had just been promoted from the second flight. After all, they are soaring since his exit (14th and knocked out of the Europa League by Connah’s Quay Nomads).

And no trophies with Le Havre? Have a word with yourself, Bob. After all, they have won one Ligue Two title in the last 25 years.

How dare you put yourself in the same bracket as Mauricio Pochettino with all his many, many trophies?