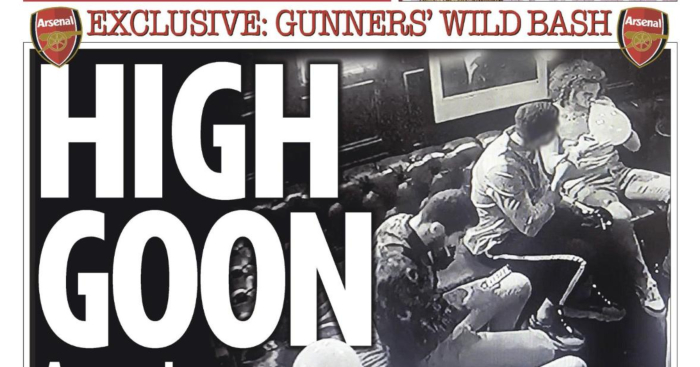 Where to start with The Sun’s front page? As tempting as it is to simply scream into a paper bag at a national newspaper’s front page being given over to the phenomenon of young men having entirely legal fun in their own free time, this sh*t needs pulling apart.

So we start with the phrase ‘hippy crack’, which is used by literally no person outside of a tabloid newsroom. It is not ‘hippy crack’, it is laughing gas, nitrous oxide, balloons or – we are reliably informed by people so much younger than ourselves – ‘nos’. For over 200 years, it has been used for recreational purposes.

Oh and it is also given to children at the dentist and women in labour.

The Sun of course use the term ‘hippy crack’ because it is a dog whistle phrase. It’s particularly powerful when used in a combination with other words to make ‘hippy crack club binge’. Which is a hell of a way to describe young men having entirely legal fun in their own free time.

One man who should know a thing or two about the law is Sun journalist Nick Parker, himself a convicted criminal after being found guilty of handling a stolen mobile phone. You should not judge a man solely by the calibre of his friends but…

I worked with Nick Parker at The Sun, 20+ years ago. He's not a criminal, he's a superb reporter who just did his job.

The second thing to note about this whole story is that it happened in August. It’s simply not news. And clearly has absolutely no relevance in December, when those same Arsenal players have just stretched an unbeaten run to 20 matches.

‘ARSENAL footballers have been filmed passing out after inhaling “hippy crack” from balloons at a wild champagne and vodka party.

‘The shocking footage obtained by The Sun shows Gooners stars Alexandre Lacazette, Matteo Guendouzi, Mesut Ozil and Pierre-Emerick Aubameyang at the heart of the dangerous binge on nitrous oxide.’

‘The boozy bash enjoyed by about a dozen players, and 70 girls, took place in London in August – just days before the start of the season.’

The key part of that sentence is of course ‘before the start of the season’. Which sounds to Mediawatch like a whole heap more sensible than getting absolutely rat-arsed before and after games like the Arsenal players of old. But good old-fashioned booze is obviously fine; it’s not ‘hippy crack’.

‘German World Cup star Ozil, 30, is seen with his eyes rolling as he falls semi-conscious with a gas-filled balloon in his mouth.’

‘French forward Lacazette, 27, looks oblivious to his surroundings as he inhales deeply from a balloon while lolling back on a plush sofa.’

‘Oblivious to his surroundings’?! So dangerous. Something could fall on his head.

‘And French whizkid Matteo Guendouzi, 19, appears to lose consciousness after being egged on to join the binge on nitrous oxide gas — which can cause coordination problems, heart attacks and even death.’

‘Whizkid’ is an excellent description of a grown man, by the way.

‘The poodle-haired midfielder slumps to one side on a sofa surrounded by laughing team-mates clutching balloons and gas canisters.’

But not as good as that one.

‘Seventy girls were specially invited to join the stars the private bash in the exclusive Tape club in London’s West End – where the stars ran up a bill of between £25,000 and £30,000.’

‘The images will horrify Arsenal fans and enrage no-nonsense Spanish team coach Unai Emery, who has presided over a return to form after a slow start to the season.’

Woah there. Now Mediawatch has taken a look on social media and the only thing horrifying Arsenal fans is The Sun making a story out of this nonsense.

Oh and ‘presided over a return to form after a slow start to the season’ is quite the description for a 20-game unbeaten run that followed defeats to the last two Premier League champions.

The Sun then quote a ‘source who was at the party’, who handily repeated everything that The Sun had already written, including the line that “if their fans – and their coach – could have seen what was going on they’d have been horrified”. Synergy.

‘Aubameyang — wearing a trendy Fedora hat — tries a balloon and sparks laughter as he lolls forward in his seat as the gas starts to take effect.’

It’s basically grooming. Using a hat. Young men are being encouraged to take a legal drug by older men in trendy hats.

Sorry, we are not taking this seriously enough. Now for the science.

‘Nitrous Oxide gas is legitimately used for pain relief in dental procedures but abused by party revellers craving the light-headed euphoria it induces when inhaled.

‘Abusing nitrous oxide can lead to oxygen deprivation and has been linked to at least 17 fatalities.’

So in the history of nitrous oxide being used as a recreational drug around the world, it has been linked to just 17 fatalities.

It’s worth noting at this point that 7,697 people died from alcohol-specific causes during 2017 in the UK alone. There is literally no comparison between the dangers of nitrous oxide and the dangers of alcohol.

Around 30 people per year die of accidental drowning in a bath tub in the UK. Oddly, we do not see front pages sensationally revealing footballers taking part in dangerous bath binges. Presumably because taking a bath is not known as ‘bubble crack’. Perhaps it should.

Finally, many of hundreds of words into the article, we get this sentence…

‘It is not illegal to possess the gas, but its sale is prohibited in England and Wales to under-18s if there is a risk they will inhale it.’

A fine Mes
Over now to the MailOnline, who take that story and come up with this URL:

‘Arsenal stars including Mesut Ozil’ is simply wonderful. He was probably the ring-leader. Except he’s really not leadership material, is he?

‘Arsenal stars including Mesut Ozil, Pierre-Emerick Aubameyang and Alexandre Lacazette in ‘hippy crack’ storm at ‘wild’ £30,000 London party where Matteo Guendouzi appeared to PASS OUT – and now boss Unai Emery calls them in for talks’

That ‘appeared’ is the first of what we can only assume is a record 14 ‘appears’ or ‘appeared’ in that article, entirely constructed from watching those videos.

The only thing the headline states with any certainly is that ‘Unai Emery calls them in for talks’. Maybe he is enraged after all.

‘Arsenal have today confirmed they will discuss the matter internally, with Emery set to be involved in the meetings.’

Oh. Suddenly it doesn’t sound quite so serious. It sounds quite informal. Who’s bringing the hippy crack?