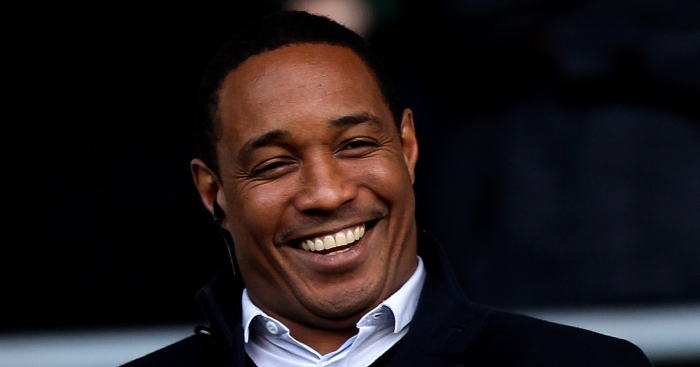 Paul Ince has said some more things about Ole Gunnar Solskjaer and Manchester United. So we have obviously gone through it line by line.

Following up on his ludicrous claim that Steve Bruce, Mark Hughes or even Chris Sutton could have matched Solskjaer in dragging United back into Champions League contention, Ince doubled down in a column for BBC Sport.

The entire stream of consciousness is just under 1,300 words, so we have just looked at his first few points to see how ridiculous the Guv’nor really is. Here we go:

‘I caused a bit of a stir over the weekend when I said I could have done what Ole Gunnar Solskjaer has done at Manchester United, but let me explain a bit more what I was getting at.’

Do we have to?

‘With nine wins from 10 games as United’s interim boss, Ole has been absolutely fantastic. He has lifted the cloud from over Old Trafford, and the team is playing a lot better than they were under Jose Mourinho.’

Indeed. So what’s the issue?

‘But the point I was trying to make on ‘Saturday Morning Savage’ was that we all knew the problems United had under Mourinho and, as a manager, I know it is relatively simple to solve them in the short-term.’

Paul Ince won his first game as Blackburn manager but drew the second and lost the third and fourth.

Paul Ince drew two and lost the other of his first three games back as MK Dons manager.

‘I am not just a pundit who has never managed a club – I have managed in the Premier League and all four English professional divisions, so no-one can say I don’t know what I am talking about here.’

Although to be fair to him, he won 53.2% of his games as a League Two manager; if only Manchester United were in England’s fourth tier.

‘And, as a manager, I could see the signs that under Mourinho the players were not happy and the atmosphere and environment was not great. Let’s be honest, everyone could see that.’

So having been a manager five years ago is redundant. Glad you’ve cleared that up.

‘My argument was that it was easy for whoever came in after that to right the ship, and lift the players and the dressing room – and put the whole club back on track.’

Because after labelling Paul Pogba a “nightmare” in August, and describing Jesse Lingard as “a prime example of everything that’s wrong at Manchester United” in December, you’d easily have been able to “lift the players and dressing room”.

Let’s not forget too that back in October Ince accused United’s players of “throwing” Mourinho “under the bus” with their “poor performances”, adding that “they’re getting away with it” and “some players want Man United to get beat, just so that there’s pressure on Mourinho to be sacked”.

Yeah, they’d have loved you in charge, Paul.

‘When I said anyone could have come in and done the same, I did not mean to be disrespectful to Ole.’

Did you mean to “be disrespectful to Ole” when you ruled him out of the job on the grounds that he isn’t English?

‘What I meant was any manager – for example myself, Mark Hughes or Steve Bruce – could have recognised the issues at Old Trafford and come in and changed the environment in a positive way.’

Mark Hughes there, famed for his positivity. Could “any manager” really have won nine of their first ten games, including matches away at Arsenal and Tottenham?

‘There is far more to it than just bringing some of the fun back, but you would start by allowing the players to play with freedom, and in their correct positions too. Ole has done all of that and has obviously made a big difference.’

Yep, this ten-game unbeaten run is all down to “freedom” and playing Marcus Rashford as a striker. Simple.

Ince might have the vaguest of points in suggesting that Solskjaer hardly faced the most difficult task when taking over this side – it was a free hit, after all. But to state that “any manager” could have matched a run of nine wins and one draw just by being “positive” and giving the players “freedom” is to grossly underestimate Solskjaer’s influence.

All of that was achieved under Solskjaer. Something tells us Ince, who has won three of his 17 games as a Premier League manager, was sacked from his most recent managerial post in 2014 and once spent £4m on Vince Grella, might not have done quite as well.