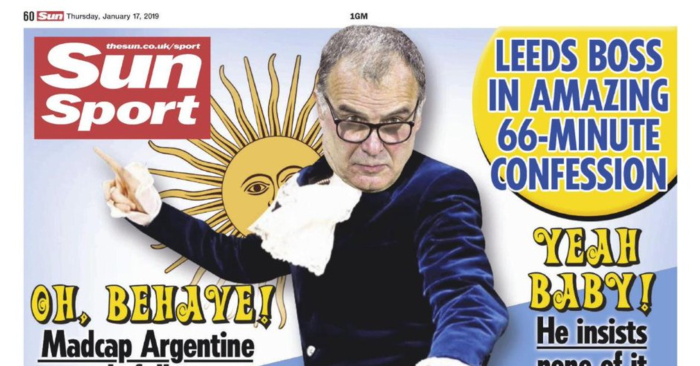 Don’t spy for me, Argentina
‘I’VE SPIED ON EVERY TEAM’ – The Sun.

‘BIELSA: I HAVE SPIED ON ALL OPPONENTS THIS SEASON’ – Daily Mirror.

‘Bielsa admits Leeds have snooped on EVERY rival’ – Daily Mail.

‘Bielsa: we spy on all of our opponents’ – The Times.

‘Bielsa: I spied on everyone’ – Guardian Sport.

And those are just the back pages. If that is the universal line that each newspaper took to describe a 66-minute press conference, there is the proof that we don’t deserve nice things.

Groovy
That said, it seems unfair to group The Sun in with everyone else, such is the effort they’ve gone to.

Tomorrow's Sun Sport back page: Marcelo Bielsa sensationally admits he has been spying on Leeds’ rivals ALL season https://t.co/mxsULzif2G pic.twitter.com/RIi7xuvSGR

Let’s go through this point by point.

The definition of a confession is: ‘a formal statement admitting that one is guilty of a crime’. So this wasn’t an ‘amazing 66-minute confession’ in the slightest.

Would The Sun spontaneously combust if the word ‘Argentine’ wasn’t preceded by ‘madcap’?

Aside from that, it’s spot on.

All Kane, no gain
But don’t make the mistake of thinking that was the weirdest thing The Sun have done in their Bielsa coverage on Thursday.

AND THERE REALLY IS MORE. pic.twitter.com/Wxw0NqkXUy

Yes, they’ve put a picture of Bielsa ‘spying’ on each of their sports pages, aside from the one in which they panic about Harry Kane. Because England’s golden boy being injured is too serious a subject to make a joke about.

Mail order
Instead of mocking up bizarre back-page graphics, the Daily Mail have asked for Martin Keown’s expert opinion. We’re not sure which newspaper wasted the most money here.

‘If this was my manager spying on our opponents’ training sessions, I would be embarrassed,’ writes a man who played for two years under George Graham, who would never have indulged in such underhand tactics, the sort which might have led to his eventual sacking after being banned from football by the FA in, say, 1995. No siree.

‘What Marcelo Bielsa has been doing at Leeds is premeditated. He may say otherwise, but watching your opponents train gives you an unfair advantage.’

But one that, crucially, breaks neither the actual law nor any football regulations. Let’s not forget that.

‘Teams may hold open training sessions from time to time, but in the main they are behind closed doors. It is not as if training grounds are in public places. There are often measures in place to ensure privacy.

‘Arsenal used to train next to a public footpath. When the training ground was redeveloped, a row of trees was planted to block the view from the path to the pitch.’

It’s funny Keown should mention that actually, as former Gunners teammate David Seaman was on talkSPORT discussing the very same matter on Wednesday.

“This has gone on for a long time. Even when we moved Arsenal’s training ground to the one next door to Watford’s, we had massive mounds built to cover the footpath, and then there were shrubs and trees and everything planted on top so that nobody could see into our training ground.”

To which Alan Brazil replied:

“Ray Parlour told us that Arsene used to climb the mound to have a little look to see what Watford were doing.”

Seaman’s response? “It’s been going on.”

Wait til someone lets old Martin know. How embarrassed he will be.

Keown the room
Keown also went on talkSPORT himself on Thursday morning, because angry men always need to be paid twice to say the exact same thing.

Amidst the rage of calling Bielsa “despicable”, “dishonest” and “morally outrageous”, Keown describes the situation thus:

“I think it’s a scandal really. It’s cheating, it’s low. I lose respect for people. We all want to win but not at all costs.”

Bielsa will be devastated that this man has “lost respect” for him for being “unsportsmanlike”.

On this day in 2003, Keown calmly offered some professional advice to Van Nistelrooy after a penalty miss. pic.twitter.com/fnwrdQxTKc

Saunders steam
Not to be outdone, Dean Saunders used talkSPORT as the platform for his own completely worthy opinions.

Trying to unpick that sentence has killed at least a few brain cells. The suggestion that managers “get given” only a whistle, a notebook and a pen to succeed is brilliant, but the fact that Saunders stops just short of claiming they’d definitely get a laptop too, because that’s simply too modern and hipster, is sensational.

Also, there has been no official confirmation that the Leeds employee had “a pair of pliers and binoculars” in his possession. But carry on.

“We all do it. We don’t go and watch training sessions though. There’s like a code of conduct. You can’t really stand at the side of the fence watching training against the opposition. It’s not the done thing.”

The use of ‘we’ is both absolutely brilliant and a theme of Saunders’ continued arguments. A reminder that this is a man who has been out of managerial work since November 2015.

“What he done yesterday, we all do it. We all do that. No, we all do that analysis. You’d have two analysts who would…I would watch the last three games, the last four, three, four games of the opposition we were playing next, and the analyst would put it into attacks, goals they’ve conceded, goals they’ve scored, how they try and attack you, which side, where does the ball go, set-pieces. So you learn things like that. But it would be interesting to see what the LMA say about it because he’s not done anything illegal, but the spirit of it, we’re all, we’ve got a union, a manager’s association union that we’re all sort of involved with. So we have got a code of conduct between us all, the managers.”

He thinks “we all do that analysis” because he once had two analysts watch the last four games played by an upcoming opponent; Bielsa had 20 analysts watching 51 Derby games.

“Everybody does it. That’s not…what he’s done yesterday, like Frank Lampard said, everybody does that. All the managers, we have, Sam Allardyce will have five or six analysts doing all that for him, and then he’d sit down, they’d condense it all, and the analysts would say ‘I’ve watched all this, this is how they’re trying to play.”

Marcelo Bielsa is just an Argentine Sam Allardyce, isn’t he?

Nor would Bielsa. A Leeds employee stood on public land watching the training session. Regardless of what you think of that, let’s not get things mixed up.

“If someone happens to be walking past with their dog, that’s alright. But if you actually send somebody to stand on the opposition’s training ground and spy on them, then I don’t know any manager in the land who’ll be happy with that.”

Hello Dean, you’re a stupid head
That was just the initial burst of Saunders. He was on talkSPORT for four hours with Alan Brazil, who continued to poke him at certain intervals for further insight.

Thank the lord he did, because the best bit came midway through the morning.

“Everybody does what he done yesterday. All the managers do it. I used to do it.”

This should be bloody good. Saunders has managed 295 games, winning as many as he has lost (111 each). He has been relegated with both Doncaster and Wolves, and once suggested Arsenal should play a 5-2-4 formation. An insight into such an analytical mind will be invaluable.

Unfortunately for Saunders, Phil Hay of the Yorkshire Evening Post phoned in and was not about to entertain such madness. When he said Bielsa’s press conference was refreshing and invaluable in terms of information on tactics and analysis, Saunders soon backed down.

Except he f***ing well didn’t, did he? After Hay quite rightly pointed out that while “everybody analyses”, “there’s not a chance that a non-league club analyses to the detail that Bielsa does”, Saunders goes all out.

“Well, I’m telling you, I’ve managed in non-league and they do. They do, yeah. And all you do is you get two students to do it, who are happy to come and they come and do it, or three students will come in as work experience. They’ve got the software that can just go ‘bang, bang, bang, bang, bang’, they can get all Leeds’ goals up, they can get all Leeds’ goals conceded, they get all the passes, who makes the most passes. We can get all the information if you’ve got the right software, and if you’ve got loads and loads of money, you can get eight analysts.”

Absolutely sensational. All of it. Just bloody brilliant.

You say tomato, I say Bielsa
As an aside, Saunders went off on a tangent at one point to discuss Australia’s recent defeat to Jordan.

“David James was showing me it. He was at the Soccer Sixes. He said ‘look at that, Australia have got beat by some minnow country’. They are expected to win it.

“By the way, he’d have a job if he was Australia manager, Bolasie, spying from Australia? Twenty-four hours on a plane?”

Credit to Alan Brazil for trying to steer a sinking ship back on track. But not even his reply of “Bielsa? Yeah, it would be” could rescue this one.

Most bizarre headline of the most bizarre day
‘Punish Bielsa – then we must learn from him’ – The Times.

Because only Henry Winter could possibly see this as a way to improve the England national team.

Italian job
But the final word on this and all matters can only go to Peter Shilton.

Recommended reading of the day
George Caulkin on Newcastle.