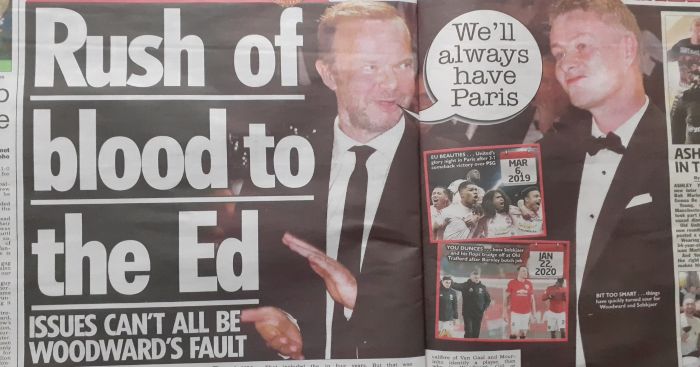 For PR to be effective it needs to be subtle. It is about managing and maintaining a favourable public image and framing perceptions. You can’t slap someone in the face and tell them to like you, or call yourself the victim and expect sympathy. It has to affect the subconscious. It does not work if the target audience is fully aware of what is happening.

It has gone well. Just this past week, Gary Neville called for his resignation, Rio Ferdinand questioned Man United’s record in the transfer market and fans have made sure to voice their displeasure, too.

So what is Ashton’s response? Presumably to pick up the phone to former colleague Neil Custis and ghostwrite an entire Sun column blaming everyone but Ed Woodward for Ed Woodward’s mistakes.

An article utterly stunning in its transparency starts with a charming story about a group of Man United supporters asking Ed Woodward for a photo after the Champions League win over PSG.

The executive vice-chairman ‘needed to process things for a second’ when he was asked. Later on, we are told that ‘the postal department at Old Trafford has to filter out appalling hate mail before it reaches his desk’.

Already we are building the story of the human behind the visage. Great work. That’ll get people onside.

‘The night before in a TV studio Rio Ferdinand was banging a desk claiming ‘Man United are back’ – after their stunning win over Paris Saint-Germain – and calling on Woodward to give Solskjaer a permanent contract ‘NOW’.

‘Woodward did just that.

‘Now ten months on, as United’s season stumbles to new lows, it is all apparently the 48-year-old executive vice-chairman’s fault.’

All? No. The Glazers, Ole Gunnar Solskjaer and the players are culpable, too. And apparently Rio Ferdinand for getting carried away as a fan. Each have been blamed (aside from the manager when it comes to you and your media friends).

Woodward, as the man in charge of seven years of woeful recruitment, sits towards the top of the blame list.

‘It is one thing questioning his judgement, it is quite another wishing him dead as some United fans chanted on Wednesday night.’

Agreed. It was crass and in bad taste. There are better ways of expressing contempt and protest – many of which have been tried but proved ineffective. They weren’t *actually* wishing him dead or threatening him, but still.

‘That, Solskjaer quite rightly claimed was ‘crossing a line’.’

But what about the many thousands of supporters who did not engage with the chant? Those who have legitimate grievances and are airing them more appropriately? Are they to be ignored because some others went too far?

‘Already Woodward’s wife has stopped going to games because of the abuse her husband gets.’

Again, it’s not nice. But her husband is the highest-paid club director in the Premier League despite considerable underachievement in at least one sector of his rather public role. It would be nice if no-one was abused. And while it is absolutely no justification for said abuse, it would also be nice if people could do their jobs properly.

‘It has become easy and lazy to point the finger directly at him for United’s relative failings.’

Well the man who Woodward has just appointed as his PR adviser referred to ‘his disastrous record of squandering United’s gazillions on below-par players’ in a hatchet job in April. We’ll let you ask him how ‘easy and lazy’ that was. You obviously have his number.

‘I use ‘relative’ because the last three-and-a-half years have still brought an FA Cup, League Cup, Europa League and second-placed Premier League finish.’

The same FA Cup you tried to discredit? And the bloody League Cup?

Fair enough; you can have the Europa League. For a multi-million pound investment that is hardly brilliant, mind. And Woodward has been in the position for seven years. Why are you discounting all those trophies won from Sir Alex Ferguson’s retirement up to 2016?

‘Everyone outside of the Etihad and Anfield could only wish for such a demise.’

Chelsea are looking on with envy and disappointment at their meagre Premier League title, FA Cup and Europa League over the last two-and-a-half years. Tottenham fans sure wish they could swap Man United’s brilliance since 2017 for their four consecutive top-four finishes and Champions League final.

‘Ah, but United have spent so much money it should be better.

‘Indeed, a £550million net outlay on the team since Sir Alex Ferguson’s retirement in 2013 should leave you with a better squad than this.

‘Yet that figure alone shows the extent to which David Moyes, Louis van Gaal, Jose Mourinho and Solskjaer have been backed in the transfer market.’

It is at this stage that Custis’s argument eats itself. He appears to be conflating ‘spending money’ with ‘spending money well’. He also seems to be suggesting that these managers have been given ample support to succeed.

Whether or not you actually agree, Woodward appointed each of those men and has already sacked three to the tune of about £30m in compensation, with the fourth likely to go at some point in the next 12 months. When does it become less ‘easy and lazy’ and more obvious to point the finger at the man who chose to employ them?

David Moyes might also disagree with the claim that those four were ‘backed in the transfer market’. He was not very good but was also afforded just two first-team signings in as many transfer windows.

Of course, Woodward had no choice but to appoint each of Man United’s last four failed managers. Ferguson ‘chose his successor Moyes’. Van Gaal ‘was regarded as one of the greatest names in modern-day coaching’. And ‘there was nobody better available when Mourinho took charge’.

Custis does not explain the appointment of Solskjaer, mind. Blame Rio or something.

‘But what about a director of football, people cry.

‘Well they did not need one when Sir Alex was there and they currently have about five people doing each strand of what that job entails.

‘So let us forget that tired, old argument, too.’

The greatest manager in the history of the sport did not need a director of football so the former Molde and Cardiff head coach certainly doesn’t. After all, ‘about five people’ are ‘doing each strand of what that job entails’.

Sounds sensible. Why employ one person who specialises in the role when you can bring in five who can do bits of it?

‘The buys are not all down to Woodward.’

‘Co-chairman Joel Glazer is the man with the final say.’

‘If managers of the calibre of Van Gaal and Mourinho identify a player, then who is Woodward, Gill or anyone else to question them.’

‘Yet because Pogba has not put a shift in from day one it seems to be Woodward’s fault.’

‘Hang on, though, was it not [David] Gill who objected to the Glazers’ takeover, claiming ‘debt is the road to ruin’, and the helped facilitate a smooth transition by staying on in his job. For another eight years.

‘Sir Alex never once criticised the owners who were taking hundreds of millions out of the club in debt management.’

Neil, Woodward literally helped broker that deal. He was an adviser during the takeover, was appointed to a ‘financial planning’ role soon thereafter and gradually made his way up from manager of commercial and media operations.

So you cannot paint the Glazers as the problem, and scoffingly refer to Woodward as ‘the evil Glazer puppet’, while ignoring that relationship.

And you cannot write a puff piece because your mate has asked you to and expect everyone to lap it up. Is this really what journalism is now?