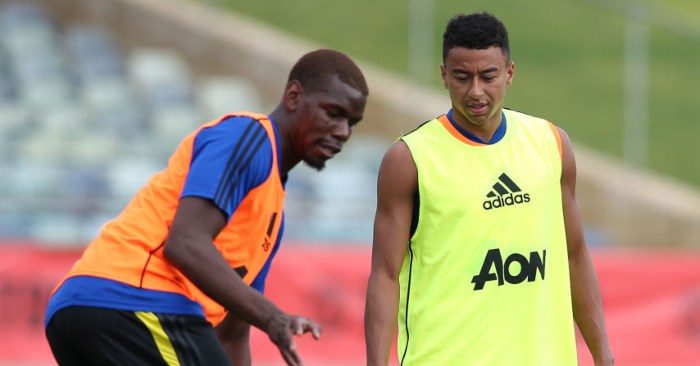 On Monday afternoon, the Manchester United Twitter account (or the ‘OFFICIAL Twitter site’ as The Sun puts it) posted a video of their (‘broken’) squad of players taking a walk around Perth. So far, so one minute and 19 seconds of dullness. Until somebody spotted something…

Pogba looks like he’s about to fight Lingard at 0:11 before Lindelof calms him down. Can’t tell if it’s real or not though.

Is it two pals having a laugh? We only see the them for a split-second and the absolute non-reaction of Anthony Martial and the relaxed smiles of Romelu Lukaku would suggest that absolutely nothing untoward is happening.

But Ryan is right; you ‘can’t tell if it’s real or not’. So it’s probably best not to speculate…

And you thought that @ManUtd video just showed them awkwardly walking around. pic.twitter.com/goX5dFr10p

And the Daily Mirror really are not alone, though following that headline with an opening paragraph noting ‘an apparent bust-up’ is particularly sneaky. You have literally no idea what is happening. No idea at all. And that is given away by the use of the phrases ‘appear to’ and ‘seems to’ within two paragraphs of the give-away ‘apparent’. How many ways can a person write ‘we have no sodding idea what is happening here but we have watched two seconds of a video and we know people will lap up this shite’?

Over at The Sun, they are too busy making us all kind of hope that Australia beat England in the cricket with their ‘SILLY AUSSOLES’ headline to lead on this ‘bust-up’, but they do find space on their back page for this headline:

Firstly, the grammar is all wrong because the purpose of the apostrophe is to indicate a missing letter so it really should be ‘Pog ‘n’ Jesse in public spat’, unless they are trying to write ‘Pog in Jesse in public spat’. Which would at least be a story. We would watch that video.

Secondly, watch the video again; it’s hardly in the middle of a busy precinct. You are pushing the definition of ‘public’ there.

Thirdly, and we bow to Ryan on these things: You can’t tell if it’s real or not.

‘PAUL POGBA and Jesse Lingard appeared to have a public bust-up just hours into their Aussie tour.’

‘Appeared to’. One paragraph in and you have already admitted you don’t have a f***ing clue what went on.

‘The footage showed Lingard seemingly reacting furiously towards Pogba after the French World Cup winner said something to him.’

‘Seemingly’ is good; somebody at the Daily Mirror is kicking themselves this morning.

‘The incident came just 11 seconds into United’s 79-second video of the players’ walkabout in Perth.’

Just 11 seconds? Could it get any worse?

Then we turn to an inside page and find this sentence:

‘The episode comes after United’s £89million record signing, 26, was snapped boarding the plane for the tour looking glum.’

Which is interesting because it directly faces a column from their Chief Sports Writer Dave Kidd, who bemoans negative coverage of the Manchester United midfielder who has become ‘a very convenient scapegoat’. We can only presume he has missed the last two back pages of his own newspaper.

Kidd may have missed it but we remember the ‘GLUM AND GLUMMER’ headlines of Monday morning as Neil Custis speculated that ‘Pogba is heading to be the most disliked player ever at Old Trafford’. Perhaps it’s his colleague Custis that Kidd has in mind as he writes:

‘There was much speculation over whether Pogba would make the plane for United’s flight to Perth on Sunday but he duly turned up – though apparently he wasn’t smiley enough as he faced up to his 17-hour flight.

‘That’s the thing with Pogba, as far as his many critics are concerned. He’s either too smiley or not smiley enough. He’s like the three bears’ porridge.’

And we like to think that Neil Custis is Goldilocks in this analogy.

The Sun and the Mirror are not the only ones on the Pogba-Lingard bust-up train, because of course the laws of journalism in 2019 is that where one leads, everybody else must follow, even if everybody knows it is bollocks of the highest.

That’s an awful lot of ‘appearing’, and some almost awe-inspiring crowbarrage from the good folks in London, never ones to let relevancy get in the way of delicious clicks.

The Daily Express website – and particularly Ben Pringle, fresh from seeing five things in the pictures of Manchester United arriving in Australia – double down on the saga. It seems that once he pops, he really cannot stop.

Not only was there a video seemingly, possibly, apparently appearing to show Paul Pogba and Jesse Lingard in a furious bust-up, but now there are images. And in those images Pogba is either on his own or looking in the general direction of Lingard. The absolute dick.

You can check out the image here. Actually, you can check it out three times because they helpfully posted it three times on the same story. Somebody even took the trouble to write three different captions:

Now Pogba could be staring at Lingard or he might be looking past him; we absolutely don’t know. But why let that stop the speculation that they have had a massive bust-up? Especially when you have other images of the Frenchman ‘appearing to isolate himself’. He was even ‘seen doing kick-ups on his own’. The weirdo.

But do you know which picture the Express did not use? Or The Sun website as they wrote that ‘Pogba and Lingard have awkward reunion in Man Utd training after clashing on pre-season tour’, which raises all sorts of questions about whether you can have a reunion (you can’t) with somebody you actually work with every day?

That’s right. The one picture you will not see anywhere else is the one – available from Getty Images – at the top of this page that shows Jesse Lingard and Paul Pogba training together and appearing – yes, appearing – to be getting on absolutely fine.

Rory Smith on the US women’s team