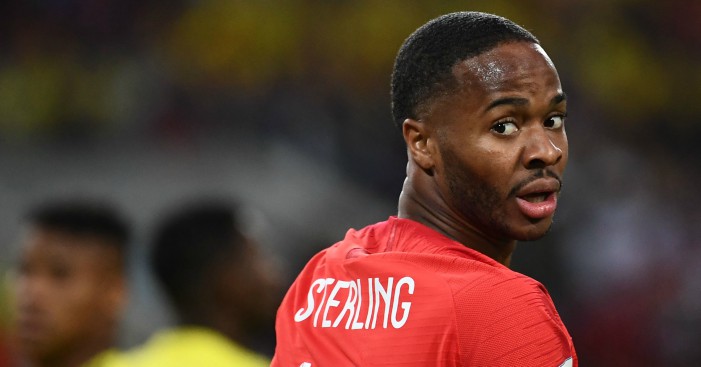 Sterling click click click
You’re the sports editor of MailOnline. Try to swallow all those feelings of self-loathing and imagine what you would do if your website has been publicly called out by Raheem Sterling for racially motivated reporting, thus making Raheem Sterling the biggest story in football on Monday morning. Sterling is where the SEO action is; so it is Sterling who you really must feature prominently. Clickety-click and all that.

a) Issue a ‘mea culpa’ and take some responsibility. You could promise not to do it again. This would get an awful lot of clicks, if you really do deem that the most important thing.

b) Ignore the issue altogether; simply stick your fingers in your ears.

c) Double-down and lap up the Sterling clicks while insinuating that, well, he cannot be that upset about all this racism, because he was at a party with his ‘Manchester United rival’ (and England teammate and, erm, friend) Jesse Lingard this weekend.

If you answered c) then congratulations; you really are made for this despicable job.

The current homepage of the MailOnline's football website. They know Raheem Sterling is quite rightly the biggest story right now. But… pic.twitter.com/iE1dxLGmut

Oh Raheem, you are wrong…
Beneath that essential update on Sterling’s social life, MailOnline do report that Sterling has told police that he was racially abused.

They do include the line that ‘Sterling also said that he believed black players and white players were not treated equally by the media, including the Daily Mail and Mail Online, and that he believes this helps ‘fuel racism and aggressive behaviour”. But they do not elaborate, and certainly do not include Sterling’s actual words on the subject, which very clearly denounce the Mail very specifically for their contrasting reporting on similar stories about the black Tosin Adarabioyo and the white Phil Foden.

After all, why would we want to hear from the actual victim of racist abuse when we can read what several white men think?

They do elaborate further in the Daily Mail itself, where they write that ‘Sterling incorrectly alleges the difference was racially motivated’. Oh that’s okay then. And they quote Piers Morgan saying that he sees ‘no difference in the way Sterling is treated (good & bad) to white football stars like Gazza, Beckham and George Best’.

Well if Donald Trump’s friend sees no racism, then that’s it. Case closed. Nothing to see here.

Because of course, when we want an opinion on racism, the correct and indeed only person to ask is a middle-aged white man.

Samuel peeps
Talking of middle-aged white men, Martin Samuel manages to write over 1,000 words in the Daily Mail on the horrendous behaviour of the Chelsea ‘fans’ who abused Sterling and the worrying fact that this is normalised in football grounds without even once acknowledging what Sterling himself believes is the cause of this horrendous behaviour. Not once does he mention the media’s part in this. There really is nothing to see here.

In fact, the only occasions on which Samuel mentions the ‘media’ during his otherwise-excellent column is to cite ‘social media’ as a factor. Of course.

Which is bizarre because five years ago, he wrote this about John Terry calling Anton Ferdinand a “f***ing black c***” (which is coincidentally the exact same phrase allegedly used by the Chelsea ‘fan’ on Saturday):

‘What Suarez said, what Terry said, was for private consumption, no matter how unpalatable. It was in the context of a game, and was not intended to be heard beyond that game. There was no message to the wider world, no belief system.

‘It was abuse, pure and simple. Horrid, racist abuse, but ultimately meaningless. Like ranting nutters on the train, the words may be offensive but they do not go anywhere.’

Mediawatch remains uncertain why Samuel has now written over 1,000 words on something that is ‘ultimately meaningless’.

Whitewash
On Sunday, The Sun online went to tremendous lengths to absolve themselves of any responsibility, simply editing Raheem Sterling’s Instagram post so that he absolutely never said that he blamed the media for the racist abuse he suffered on Saturday. It never happened. Obviously, one form of racism is to deny black people a voice. So congratulations on the consistency, at least.

A little respect
The Sun’s Manchester man Neil Custis then appeared on talkSPORT, because it is time we got a definitive answer on this racism lark.

It all started so well…

“I totally abhor what’s happened at the weekend. It was disgraceful. Raheem Sterling – for me – is a brilliant example of a player who has worked so hard at his trade to get to where he is and to be, for me, one of the best English footballers we have. But if he feels he has to say something, I respect that. As Darren (Lewis) said earlier, it is a strong stance and a brave stance and I totally respect him for that.”

Great. Respect for the respect. So does Raheem Sterling have a point? Well, obviously not.

“The newspaper doesn’t look at it and say one’s black, one’s white, let’s consider how we’re going to do it. It’s just not like that.”

Total respect Raheem, but you are totally wrong. And there is absolutely no such thing as unconscious bias; we bow to Neil Custis and his knowledge on this and all things.

Brazil nuts
As an aside, Alan Brazil’s attempts to claim that football clearly has no race problem because Sol Campbell has been given the Macclesfield job is some of the greatest radio of all time. And by that, we mean the worst.

Victim-blaming ahoy
Bizarrely, Monday morning’s conversation between Custis, Brazil and Ray Parlour was by no means the most contemptible thing said on this subject on talkSPORT since Saturday. That honour goes to Dave Kitson, who once wondered out loud why anti-ginger abuse was not considered as serious as racism.

Now it turns out that Sterling has basically brought all this on himself. We present this (almost) without comment.

“You cannot condone this racism in any way shape or form, I think it’s disgusting.

“But I do believe that players make themselves a target. Why Raheem Sterling? There are other black players on the pitch, every single week.

“I just think that we have a duty of care to ourselves as footballers, to be a little bit careful with social media, and the way we portray ourselves.

“Jealousy is an awful thing amongst the human race.

“I trawled through Raheem Sterling’s Instagram feed this morning to find that a lot of what he put on in his early days has now been deleted.

“Now that is no excuse whatsoever for racially abusing somebody.

“But you sow a seed amongst people who are not racist, not to like that particular person, because they don’t want to see that in their faces every day.

“Now when you go onto Raheem Sterling’s Instagram it’s ‘here’s a goal I scored last week, here’s me in a kids hospital.’

“So someone’s got hold of him and said, ‘look, you can’t do that any more.’

“But that seed has already been planted in people’s heads.”

So Kitson ‘trawled’ through Sterling’s Instagram feed to find a reason why anybody would racially abuse him (which is in itself a ridiculous thing to do on a Sunday morning), failed to find any and simply ploughed on anyway. It cannot be that he was wrong and had got that wrong impression from a media obsessed with Sterling’s supposed ‘bling’ lifestyle; it must be that Sterling has deleted those posts. There can be no other explanation.

Oh and it’s absolutely f***ing ridiculous that we have to say this in 2018 but EVEN IF HE HAD POSED A ZILLION PICTURES OF BATHROOMS, HE SHOULD NOT EXPECT TO BE RACIALLY ABUSED. Oh and women in short skirts aren’t ‘asking for it’ either.