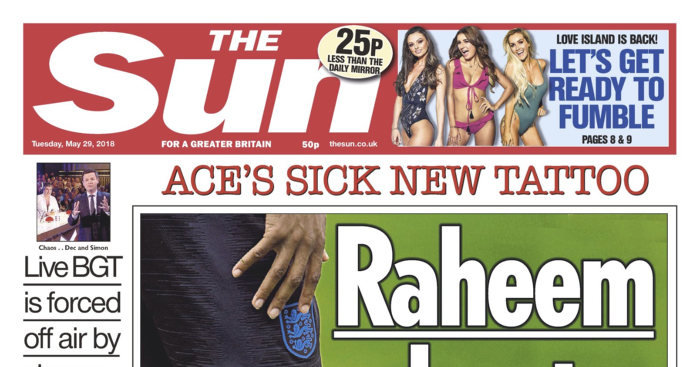 Thankfully Mediawatch no longer needs to type out an exhaustive (and exhausting) list of occasions on which Raheem Sterling’s perfectly normal actions and choices have seen him vilified by our national press, because Adam Keyworth has pretty much done it for us…

[Thread] a selection of times when our national press have chosen to run stories on Raheem Sterling.

Let's not forget this deleted tweet just after Euro 2016 either. Raheem Sterling had NOTHING to do with the story. pic.twitter.com/lhR7cb5HeL

So to re-cap, things Sterling is not allowed to do – according to our great British press – include:

* Put a nice sink in a house he has bought for his mother.

* Spend too much of his own money on cars.

* Spend too little of his own money on cleaning cars.

* Spend too much of his own money on flights.

* Spend too little of his own money on flights.

And we say ‘include’ because there is so very much more. And because we can also now add ‘spend his own money to tattoo his own leg’.

By now you will have seen this…

‘RAHEEM Sterling has triggered the fury of anti-gun campaigners by unveiling a new tattoo of an M16 assault rifle on his right leg.’

‘THE SUN have triggered the fury of anti-gun campaigners by showing them a picture of Raheem Sterling’s new-ish tattoo of an M16 assault rifle on his right leg without giving them all the details and bothering to discover the context.’

We cannot imagine what went through the minds of The Sun’s Stephen Moyes and Alex Diaz (for it took two of them to write the story) as they rang Lucy Cope, who represents Mothers Against Guns after her son was shot dead, for a quote about Sterling’s tattoo.

Yes, her ‘demand’ that Sterling “has the tattoo lasered off or covered up with a different tattoo” sounds ridiculous, but this is a woman who has lost her son to gun violence; she is vulnerable; she is ripe to be exploited for a front page that really has little to do with guns and everything to do with a long, vicious campaign against one man.

She is now the subject of rabid online abuse when really, it is The Sun and its journalists who are the bad guys here. They did not wait to see Sterling’s explanation for the gun on his leg – a tribute to his father who was gunned down from a man who is very much anti-guns – before asking Lucy Cope for a quote.

In reality, Cope and Sterling have more in common than either would think; perhaps she could help him set up Sons Against Guns.

And of course, whatever appears on The Sun’s front page becomes news elsewhere…

There are calls for Raheem Sterling to step down from England's World Cup squad following his decision to have a gun tattooed on his leg. Which side are you on? pic.twitter.com/thN3YekOiY

Which side are we on? Oooh, now that’s a poser. And takes about as long to answer as when we consider which ‘side’ we are on when a man drives a van into a crowd of people or which ‘side’ we would have been on when Adolf Hitler ratified the Final Solution.

Clue: There are no sides in this argument.

Oh come off it, mate…. every major tournament, England footballers tend to do things like this to deliberately rock the boat.
Blaming the media is ridiculous. https://t.co/NSFucXyg6E

And yes, this is the same Piers Morgan who was sacked by the Daily Mirror after he published fake photos of torture by British troops.

And the same Piers Morgan who counts NRA sympathiser Donald Trump as a “good friend”.

Morgan is right on one thing though; this is not the media trying to ‘rock the England boat’ to ‘damage players morale’. This has been going on too long with one specific player to be about derailing England’s World Cup ambitions. This is far more personal.

And the problem is that this kind of treatment does not exist in a vacuum. Britain’s tabloid press do not write 20 ridiculous headlines about one man and then everybody goes about their business as if nothing has happened. Call a man a ‘footie idiot’ and some people will think he is a ‘footie idiot’. Criticise a man for spending too much and people will think he spends too much. Criticise a man for spending too little and people will think he spends too little. Repeatedly point the finger at one young black man for perfectly normal and reasonable behaviour and that black man – and others like him – becomes a target.

In December a man was jailed for walking up to Sterling and calling him a “black scouse cunt” before repeatedly kicking him in the legs. He then said: “I hope your mother and child wake up dead in the morning, you nigger.”

And if you think that kind of behaviour is entirely unrelated to the sustained media coverage about Raheem Sterling then we really do not want to be on your ‘side’, for you Sir/Madam, are an idiot, footie or otherwise.