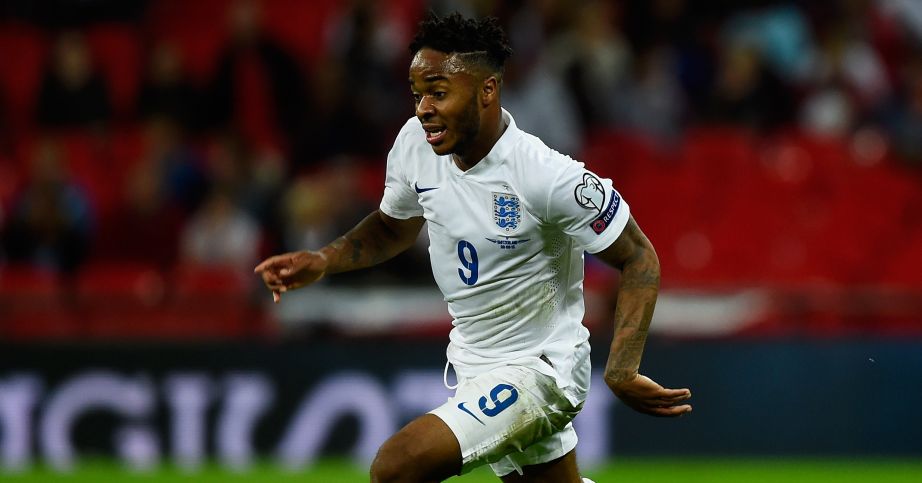 Raheem Sterling needs to start giggling on the pitch if he’s not to be a national disappointment. Plus some wonderful top, top twaddle from Glenn Hoddle and Chris Smalling wars…

Hatchet A Plan
Mediawatch thinks that Raheem Sterling played pretty averagely last night. He wasn’t brilliant and wasn’t terrible, rather reflective of a game in which England played within themselves after qualification had already been confirmed.

However, don’t say such reasonable things to The Sun’s Mark Irwin, who does what can only be described as a hatchet job on Sterling. It isn’t pretty.

‘Wembley last night was prepared to give Sterling the benefit of the doubt,’ Irwin begins. ‘What a pity he could not repay their generosity with the kind of display which convinced Manchester City to pay an eye-watering £49million for his services. Sterling was not so much quiet as positively mute in a disturbingly lacklustre display.’

See, we told you it was savage.

‘If that is true [Sterling is happy], Sterling has a funny way of showing it,’ Irwin continues. ‘In fact, he generally looks about as happy as Aaron Lennon on transfer deadline day. Maybe he needs another shot of hippy crack.’

Yeah Raheem, why aren’t you smiling and laughing on the pitch? Why aren’t you giggling as you kick the ball. B*stard.

‘Kane contributed more in nine minutes after replacing Jonjo Shelvey than Sterling managed in the entire 90 – the winger did not manage a shot all night and only got to the byline once but failed to pick out a team-mate with an over-hit cross.’

That’s one way of looking at it Mark. Another way of phrasing it is that Sterling created more chances than Jonjo Shelvey, Nathaniel Clyne, Ross Barkley, Harry Kane, Wayne Rooney, Ross Barkley and Alex Oxlade-Chamberlain combined, and was fouled for the penalty from which England scored their second goal.

Top Tw-Hoddle
Mediawatch could only sit back and admire Glenn Hoddle’s vocabulary on ITV‘s Euro 2016 Qualifier Highlights on Tuesday night. Speaking on Wales:

“For me I think they’ve three really class players. Top players. They’ve had top players in the past but I think, top players, you have to have other players there…but Williams, Ramsey, Bale for me are top, top players playing in the Premier League. Well, obviously Bale now in La Liga. Top quality players with decent players…”

What Would You Do?
Scotland striker Steven Fletcher is coming in for a fair bit of stick. He has started each of Scotland’s eight qualifiers so far and has only scored against Gibraltar. That stick might be fair.

“I’m doing what I can,” Fletcher said. “I’m running around, as you can see. If they are not happy with that, then it’s down to them. Obviously I would love to score goals but if I’m not getting the chance, then I am not going to put it away.”

“I’m running around” – that might just be football’s best definition of damning with faint (self-) praise.

Spot The Odd One Out
‘Smalling: One of England’s most improved players this season and looks like he could become first choice at the back next summer’ – Daily Star.

‘Smalling: Solid and determined. Looked calm and confident, as he put down a marker as a challenger to John Stones in the centre of defence’ – Daily Express.

‘Smalling: Appears to have established himself as England’s first-choice centre-back. Made a good early clearance and did well to cut out danger’ – Daily Telegraph.

‘Smalling: Played with authority. Very unlucky with the yellow card’ – Daily Mirror rate Smalling as England’s best player and Man of the Match against Switzerland.

‘Smalling – The most under threat from John Stones and needs a lengthy run for Manchester United and England to stand a chance of starting in France next year. Booked’ – The Sun rate Smalling as England’s joint worst player against Switzerland.

‘If he is fully fit then he will go there [Euro 2016] right in his prime because he is something special’ – Martin Keown, Football Assocation website.

Brushing over some questionable performances and the fact that four of Rooney’s goals have been penalties is one thing. Describing Rooney as ‘right in his prime’ is another entirely. Steady on old thing.

Slight Difference Of Opinion
‘As ever, Milner was utterly reliable. Great ball to put through Rooney early on’ – Tony Banks, Daily Express.

‘It is not like Milner cannot hit a good pass, it is simply that he cannot do it as often as England would like’ – Sam Wallace, Independent.

Given that Banks also rated Luke Shaw as England’s joint-worst player, Mediawatch knows which one it will trust.

Five More Ridiculous Headlines From Far More Successful Websites
‘Stoke’s £12m ace Xherdan Shaqiri sets surprise target for Arsenal clash this weekend’ – Express.co.uk. That ‘surprise’ target? “We want to get at least a point from the game.” Well knock us down with a f**king feather.

‘Chelsea must put their faith in these two against Everton’ – Metro.co.uk. There’s only a picture of Ruben Loftus-Cheek.

‘Who’s on plane to France 2016?’ – Skysports.com. We enjoyed the first comment: ‘Maybe none of them? They might get the Eurostar.’

“I was very impressed with Danny Ings in pre-season and he is a quality player that can come on. I think Liverpool have got people on the bench who can come on and win you the game now where maybe a couple of years ago we didn’t have that.”

Yes Rushy, but the other difference is that a couple of years ago the players starting the match were winning you games.

Unfortunate Mistake Of The Day
Breaking news alert sent out by Sky Sports on Tuesday evening:

Harsh on Rooney, who actually passed Robson’s goals total in June 2004 with his double against Iceland.

Zing Of The Day
‘Considering the uninspiring tone of his BT Sport co-commentaries, it is apt that Michael Owen has invested in a company selling drones to football clubs’ – Charles Sale, Daily Mail.

Non-Football Story Of The Day
‘A pair of 5-year-old boys in Russia dug a tunnel under their pre-school as part of a plot to buy a luxury car.

‘In an operation that is believed to have been planned over several days, the duo used toy spades to form a passage under the kindergarten fence in the Ural Mountains city of Magnitogorsk, The Moscow Times reported citing the Komsomolskaya Pravda newspaper.

‘Seizing their chance to escape during their afternoon break, the boys crawled under the fence. They then reportedly embarked on a 2km journey to a Jaguar car dealership. When the woman at the showroom asked the boys why they were there, they told her they wanted to buy a car but didn’t have enough money.

‘The staff member then escorted the intrepid pair to the nearest police station.The teacher on duty when the pair escaped has since been fired, according to the newspaper. The regional interior ministry for Chelyabinsk confirmed the boys’ escape to AFP.

‘“We don’t have any details yet, we can only confirm the fact itself,” a spokesman told the agency’ – Independent

Thanks to today’s Mediawatch spotters Paddy O’Brien and Nik Roseveare. If you spot something that belongs on this page, mail us at theeditor@football365.com, putting ‘Mediawatch’ in the subject field.
mediawatch Raheem Sterling