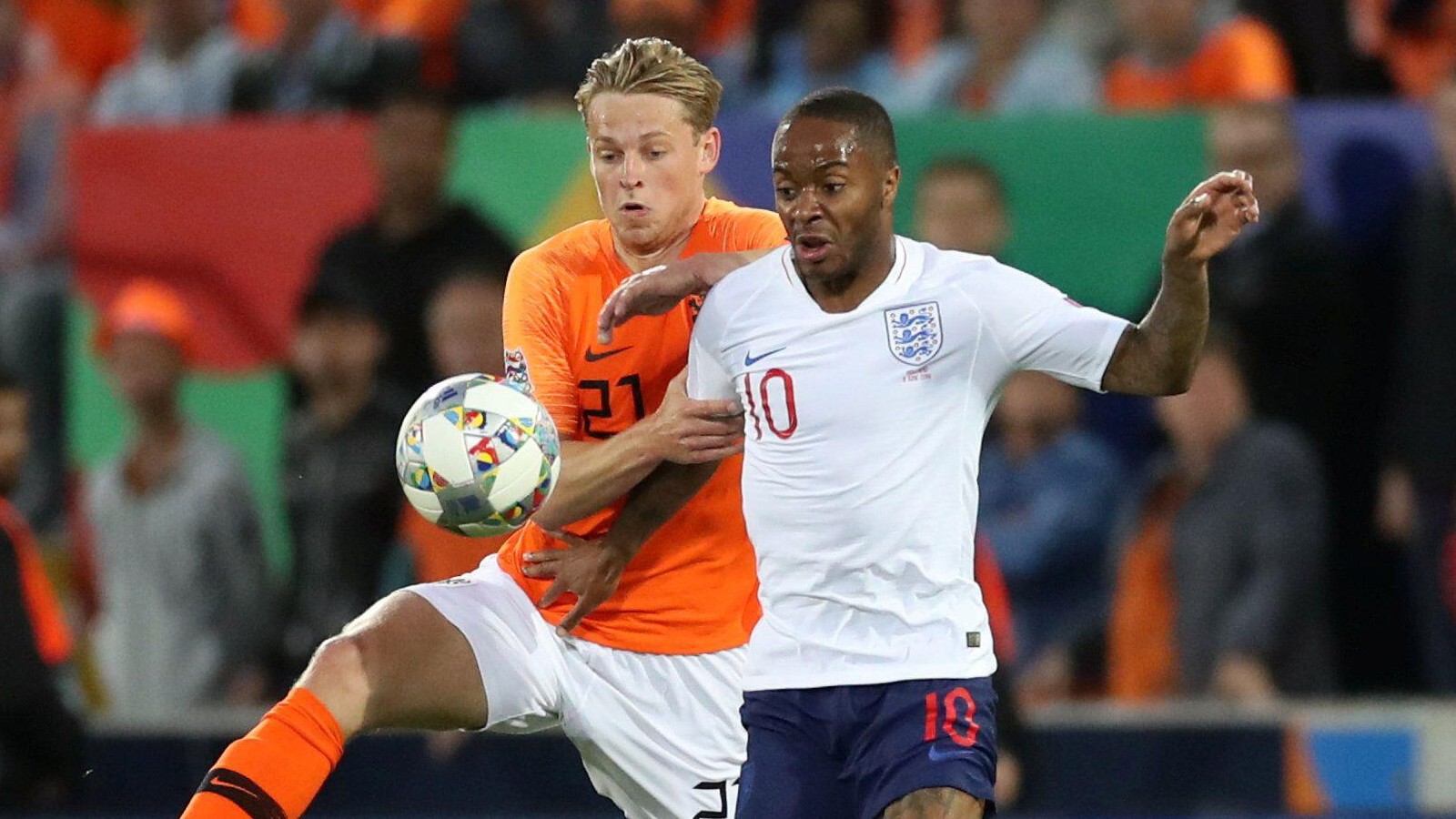 Frenkie de Jong updates are difficult to come by but needs must. And Mediawatch runs it back with Raheem Sterling, The Sun and the Daily Mail.

Thought offside
It’s refreshing to see a Raheem Sterling story in The Sun and not subconsciously wince at what is to come. But the year is 2022 and the nation’s best-selling newspaper is no longer titillated by the idea of inexplicably bullying the England forward.

They report on Sterling’s first press conference as a Chelsea player, during which the abhorrent abuse he suffered from some Blues fans in December 2018 was brought up.

Tom Barclay recounts the sorry saga in depressing detail before landing at these two paragraphs:

‘Sterling spoke out after the incident, claiming his reaction at the time was to laugh because he expected “no better” and claimed sections of the media “fuelled racism” with their portrayals of young black players.

‘His statement was seen as a turning point in the battle against bigotry, giving other players the power to speak out and the press pause for thought over coverage.’

Ah yes. It was almost four years ago but Mediawatch remembers with absolute clarity how Sterling’s statement gave ‘the press pause for thought over coverage’. And after an incredibly short pause, here was the sum total of The Sun’s thoughts at the time, kindly preserved for clarity:

‘LET’S get something straight. The racist abuse of Raheem Sterling at Chelsea is not somehow The Sun’s fault. We hope those allegedly responsible get what they deserve. We hugely admire Sterling’s talent. Our coverage of his off-field behaviour has nothing to do with skin colour. The suggestion is ridiculous and offensive – and the idea it inspired racists is baseless. His media mates should engage their brains before dishing out accusations without a shred of evidence.’

A reminder that Sterling’s ‘off-field behaviour’ extended to buying his mum a house, getting a tattoo in honour of his dead father and flying with EasyJet.

Perhaps they have paused for thought at some point over the years since, but The Sun certainly did no such thing at the time and they know it.

Ster crazy
As an aside, here is the result of The Sun’s website‘s ‘pause for thought over coverage’ when it came to Sterling:

Mail order
Do the Daily Mail play things any differently? Do they balls.

Daniel Matthews is similarly tasked with tiptoeing around the newspaper’s direct part in the matter, writing only that:

‘After smiling as the faces of Chelsea supporters twisted with rage, Sterling released a statement, asking the media to have ‘a second thought about fair publicity and give all players an equal chance’.’

Well that’s certainly a very small part of what he said. You’ve accidentally missed out a couple of key bits. Here, let us help you out:

Ah yes. He mentioned ‘the media’ but specifically called out two MailOnline headlines to emphasise ‘how the newspapers get their message across for the young black player and then for the young white player’.

That, of course, takes us to said website to see whether they also airbrush that particular part of history, or if they actually acknowledge the part they played.

Option a), of course. The actual words from the statement Sterling made on Instagram in December 2018 are published in their entirety. The images he posted to accompany them – and damn the MailOnline – are not.

Must be a simple oversight. Footie idiots.

Success story
And never forget that two days after Sterling’s Instagram post, the Daily Mail tried to support their own argument with a back-page story about Everton supporters appealing for a throw-in in the vague vicinity of Isaac Success.

That sounds weird for a reason. Remind yourself of just how bizarrely awful that coverage was.

Classified information
What is hopefully – mercifully – the final word worth reading on the BBC’s decision to declassify the results on a Saturday afternoon comes from Martin Samuel of the Daily Mail:

‘One of the reasons the demise of football clubs is so sad is that, however lowly, league status puts a town on the map.

‘How often do you hear of Rushden or Workington, now their teams are divorced even from the National League? So that is another sliver of identity lost with the end of the football results on BBC Radio.

‘Those broadcast minutes were wholly egalitarian: Rochdale afforded the same time as Arsenal. Slowly, these names will be erased from memory. There was once South Shields, Merthyr Town, Ashington, Nelson – and they all still exist. We just don’t hear from them any more.’

And there it is. Forget the theme music, sitting in the car, the intonation of James Alexander Gordon and Charlotte Green, East Fife 4 Forfar 5 and the rest of it. It is a tragedy and a travesty because non-league clubs will simply cease to be if their name isn’t read out once a week for a fleeting moment.

Jong division
As Assistant Editor (Agenda) for the Daily Mirror website, Jake Polden sees things others simply do not. It is a gift. A lucrative, clicky gift.

For example, if Mediawatch was to tell you that Mikky Kiemeney, fiancee of Frenkie de Jong, posted a video of them both in a car and then wakeboarding, with a caption of ‘Meanwhile… living our best life,’ what would your headline be?

To be clear, there is no more information to base the story on. Just that video and those five words. That is literally it.

But it’s more than enough for our old friend Polden, who pulls an absolute pearler out of the bag with this:

Frenkie says relax
Given the same task, The Sun website understandably struggles under the weight of expectation and reverts to type:

Silly sods didn’t notice the ‘transfer hint’. Brave of him to bring his wife and girlfriend, though. His poor fiancee will be devastated at missing out.

Come on sugar, let me know
And the Daily Star website just completely sh*ts itself: