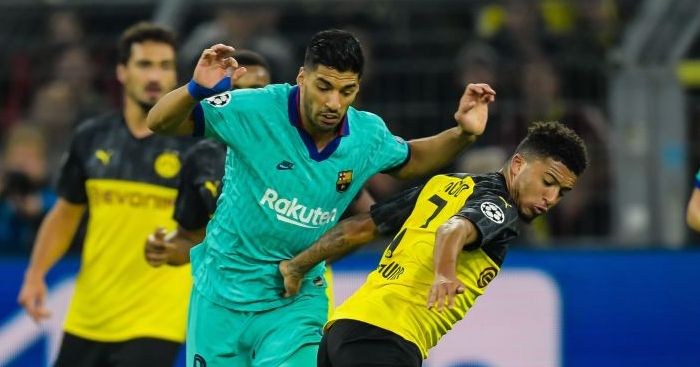 Well, I won’t give up on us
It sure has been a while, but Neil Custis is back on Wednesday with one of his specialities: a Sun exclusive on the future of Jadon Sancho.

You might remember him from such previous claims as ‘the Red Devils have forced the Germans into accepting staggered payments, with £70m up front,’ and ‘Jadon Sancho is under increasing pressure from Borussia Dortmund to make a public statement devoting himself to the club.’

That second story is pertinent as, 20 days later…

‘Manchester United will not give up on Jadon Sancho until the England star publicly admits he wants to stay at Borussia Dortmund.’

Way to make one of the world’s most famous football clubs sound like a creepy bloke leering at women in a bar.

Sancho himself was quoted as saying the following on August 14: “I love playing with this lot. This is a special bunch and we have some special young players coming up. I am really happy to be sharing the same pitch with them and guide them, because I was in their shoes and I know how it is for them.”

And this on August 22: “I try not to look at the media because I think once you start looking at all that it would be easy to get carried away with it. I don’t really look at all the noise and all that stuff.”

But no, he ‘has remained tight-lipped about his future’. Apart from the times he really has not.

Manchester United either aren’t listening or Custis is busy frantically throwing shit at the wall again. It could well be both.

Even if the skies get rough
Elsewhere in that story…

‘United had put all their efforts into landing Sancho this summer with an offer of £70million up front rising to £110m.

‘Personal wage demands had been sorted and the player was ready to make the move back to Manchester where he started his career at The Etihad with City.

‘But the Bundesliga side wanted more money up front and United were not prepared to pay it.’

So why did you report that United had agreed a £70m fee rising to £110m, adding on August 10 that wages and agent fees were ‘proving a sticking point’ that could force them to ‘walk away’?

That is literally the exact opposite of what those three paragraphs state above. Are you just guessing now?

I’m giving you all my love
‘MANCHESTER UNITED have not given up on landing Jadon Sancho’ – Neil Custis, The Sun, August 10.

‘MANCHESTER UNITED will not give up on Jadon Sancho until the England star publicly admits he wants to stay at Borussia Dortmund’ – Neil Custis, The Sun, September 2.

It feels a bit like Manchester United have given up on Jadon Sancho. The Neil Ashton-led propaganda machine is a whole different matter.

I’m still looking up
The Manchester Evening News is happy to play the game, mind.

…at an England kit launch. So not bloody Carrington. But well played with getting ‘transfer-news/sancho-rashford-man-utd-news’ in the URL.

Playing fast and Luis
Their cousins at the Liverpool Echo see that shithousery and raise you an entire shitmansion.

‘Liverpool news and transfers LIVE – Luis Suarez agrees terms, Kristoffer Ajer and Patson Daka linked’ is the headline atop their website, and they really do know exactly what they are doing with that first bit.

You don’t put ‘Liverpool news and transfers LIVE – Luis Suarez agrees terms’ in there by accident. You do it in the hope of grabbing a bit of extra traction on a player who left in 2014 potentially moving clubs again.

Except that isn’t even the best bit. Those clicking in and hoping for some sort of update on any of the subjects in the headline will be left disappointed. There is not a single mention of Suarez, Ajer or Daka beyond this second paragraph:

By whom? When? It is an absolute mystery.

For what it’s worth, the Ajer link emanated from this tweet on August 24:

And the Daka link originated on Tuesday. So two old rumours Mediawatch has had to source itself, as well as someone who last played for them six years ago possibly leaving Barcelona to join Juventus, qualifies as the biggest Liverpool news of the day at the busiest time for website traffic.

Wern of warning
Over at the Daily Mirror, Timo Werner is firing shots at Liverpool. At least that’s what a headline of ‘Timo Werner sends message to Liverpool ahead of new Premier League season’ implies.

This should be great.

“The work with the manager recently has been really good. He’s been showing and explaining to the whole team, not just me, what we can do on the pitch and how to improve on last season.

“He’s been great to work with and he’s been discussing his plans for the future, and how we want to battle with teams like Man City and Liverpool.

“I think Chelsea is a big club and with this team that we have, I think we can reach a new level. We have some very good players here and the manager is there to show us the way, and help us improve.

“We’ve worked a lot on tactical things, as well as our strength and fitness, to make sure we are ready for the start of the season.”

Did we say great? We meant bland. And even that is incredibly generous.

It was neither a ‘thinly-veiled jibe’, nor did Fernandes ‘hit back’. Aside from that, spot on.

Recommended reading of the day
Sid Lowe on Ivan Rakitic.