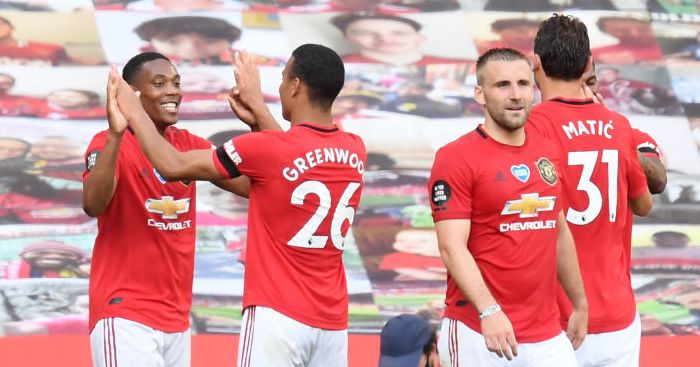 If the boot fits
‘Solskjaer ready to boot bad boy Anthony Martial out of Man Utd for poor attitude at training’ – Neil Custis, The Sun exclusive, May 8, 2019.

‘Solskjaer must give up on surly Martial now and give Greenwood his chance’ – Neil Custis, The Sun, December 1, 2019.

‘With Martial still only 24 and Rashford, 22, there is reason to believe United could have a pairing like Dwight Yorke and Andy Cole if things progress the way they are under Solskjaer’ – Neil Custis, The Sun, June 24.

The Blades tragedy
As an aside, how many paragraphs do you think it took for Custis to make even the vaguest mention of Sheffield United, their manager or their players in his match report?

Well ‘the advancing Simon Moore’ is finally referenced in the 22nd paragraph, while the Blades themselves are not actually named until the 28th of 34.

It’s all about that ‘surly’ French ‘bad boy’ who scored a hat-trick for the team that wanted to sell him, clearly.

Over and out
Paul Pogba is barely referenced in that article either. He was ‘impressive in his first start since September’, but that really is it.

Mind you, that’s not bad considering he was bound to ‘go down as the most disliked Manchester United player of all time’ in July, and both player and club were ‘desperate’ to part in January.

Hell, as late as March we were exclusively told that Pogba’s ‘Manchester United career is over’. It certainly didn’t look like it.

50 shades of Grae
Graeme Souness explained before the game at Old Trafford that he simply wants Pogba to “work harder”. And he used his Sky Sports platform after it to tell Martial to smile more.

“He didn’t have to think about the first two. You know, they’re reactionary, his first two goals. But the third one he had to do a bit of thinking, and it was class.

“But we know he’s class. He’s got everything to be a top, top player. If he could just have the same enthusiasm as Marcus Rashford for the game…

“There’s no doubt that Martial’s a proper player but he seems to hide it. Sometimes he doesn’t seem interested but he was tonight. Maybe he needs to score early in every game he plays and then he stays interested.”

Four pictures: one after each of Anthony Martial's goals and the last after a miss.

Graeme Souness: "If he could just have the same enthusiasm as Marcus Rashford for the game…" pic.twitter.com/URdZN7vDfn

Curb your enthusiasm
Honestly, though. Martial had just scored his first professional hat-trick and drawn level with Rashford as Manchester United’s top scorer this season, and Souness chose that moment to tell him to show “the same enthusiasm” as a teammate?

Mediawatch understands that pundits have a duty to issue constructive criticism even during times of success, but suggesting that Martial often “doesn’t seem interested” and needs to show more “enthusiasm” in the midst of his highest-scoring campaign ever is b*llocks. And the idea that someone is ‘surly’ just because they don’t smile as much as Ronaldinho while playing football is stupid. Roy Keane hardly grinned through every game and he was pretty good.

Rash decision
Not that “enthusiasm” protects Rashford against that most unforgiving of arenas: Twitter.

The questionable advent of using tweets from fans to form the basis of an article has led to a regrettable proliferation of pointless stories in football journalism.

No offence to @MagicMikeDean or @DejanLovrenSZN. It’s just that the sort of outlets that consistently rely on foraging social media posts in the name of content are those that can afford not to with their resources.

Which brings us neatly onto the MailOnline and their considerable army of writers, experts and guest columnists. But why use all of them when you can pretend Rashford has come in for genuine criticism?

See if you can notice ‘a strong negative reaction by a large number of people, especially to a social or political development’ in the three tweets used.

‘Rashford is wearing Phil Jones boots tonight. If he changes them at half-time he will get his 20th goal of the season.’

‘Nothing like putting Rashford in my FPL team and watching him miss sitters. Back him to score a much harder chance in the second half though.’

It turns out that harmless quips about Phil Jones, jovial references to Keane and support in scoring ‘a much harder chance in the second half’ now qualifies as ‘backlash’. If you are a sensationalist website pretending that an incredibly popular footballer has been pilloried, that is.

O’Hahahahara
Martial’s other crime? Not being Harry Kane.

“Man United, for me, are still the biggest club in the world, for me,” Jamie O’Hara told talkSPORT, for him.

“Even though they’re not where they were, they’re still the biggest club in the world. And I think the missing piece in that Man United team – even though Martial is a fantastic player – if they did sign someone like Harry Kane, then you’re talking about a team that wins the title again.”

Forget the right-sided forward, left-back, centre-half and possible change of the goalkeeping guard; we’re back to this again.

Title generator
‘What must happen for Liverpool to win league on Thursday’ – Daily Mirror.

Quite how it takes 318 words to say ‘Manchester City need to drop points’ is a mystery. But also because Google.

Recommended reading of the day
Mark Critchley on Anthony Martial.