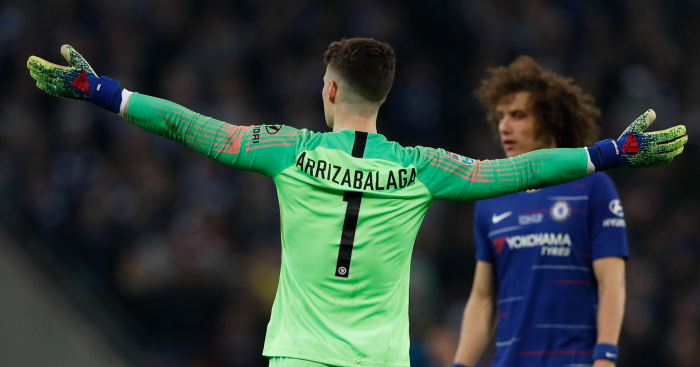 The worst thing ever, ever, ever
We really didn’t like Chris Sutton, and then we really liked him, and now we have really gone off him again after his quite frankly bizarre reaction to the Kepa farrago. A reminder, should it be required, that the young man (for he is only 24) has apologised at length for his actions, both publicly and to his teammates and colleagues.

Sutton – who famously turned down an England B cap in a fit of pique – asks this question in the Daily Mail:

‘The decision of whether to drop Kepa Arrizabalaga is not a difficult one to make.

‘What has Maurizio Sarri got to um and ah about?

‘The Chelsea goalkeeper undermined him in a cup final while millions watched at home. What can a player do to a manager which is worse than what Kepa did to him?’

Mediawatch can think of 427 things, including ‘punch him in the face’, ‘sh*t on his chest (without consent), kidnap members of his family and make him watch Sky One drama Curfew starring Sean Bean. All of which are far, far worse than refusing to leave the pitch.

Scott free
‘MAURIZIO SARRI will face no punishment for angrily hurling a water bottle into his seat as he raged at Kepa Arrizabalaga’s refusal to be substituted at Wembley’ – Daily Mail.

Breaking: Man not punished after breaking no rules.

‘THIS club scrambles even the best football minds.

‘It did for Jose Mourinho, Carlo Ancelotti, Luis Felipe Scolari and Antonio Conte.’

A quite wonderful piece of cattiness there, not to include Andre Villas-Boas on that list. The two have history. Meow.

‘Maurizio Sarri seems to be heading the same way.

‘The problems at Chelsea – some his fault and some that are not – are starting to stack up.’

Well, they are a full three points off their pre-season target of a Champions League place and have been knocked out of both domestic cups, so it’s fair to say that things are not going exactly to plan. Though they are still in the Europa League and held Manchester City for 120 minutes on Sunday. Oh, this is The Sun, you don’t mean the football, do you?

‘Kepa Arrizabalaga’s act of defiance, Fifa’s untimely transfer ban plus the militant fans in the stands singing “F*** Sarri-ball” during last week’s FA Cup defeat at home to Manchester United are among them.’

That will be three problems, only one of which is actually his fault. Carry on…

‘The Italian, headhunted after coming so close to perfecting his Sarri-ball technique with Napoli, is struggling to hold this dressing room together.

‘Chelsea are desperately trying to make things function, to map out a way for Sarri and club director Marina Granovskaia to work in harmony.’

So they are ‘desperately trying’ to make Granovskaia and Sarri ‘work in harmony’? And yet on the back page, Ashton himself writes that ‘Sarri’s stock rose with Marina Granovskaia over his cool handling of senior players’. Can both things be simultaneously true?

‘Tottenham away on November 24 was the moment things started to go wonky for Sarri.

‘Chelsea were unbeaten in Premier League and cups until goals from Dele Alli, Harry Kane and Son Heung-min saw their big London rivals gallop to a 3-1 win.

‘Since then Sarri-ball has sucked, with the defeats piling up. He has to sort out this wretched form – and fast.’

Chelsea did indeed lose to Tottenham on November 24. But they then lost just one of their next seven games. That was quite clearly not ‘the moment things started to go wonky for Sarri’. And the defeats only started ‘piling up’ in mid-January. As recently as January 18, Chelsea were in fourth and still in three knock-out competitions. They have been a bit sh*t since, but painting this as a three-month crisis is wildly inaccurate.

Mentions of Chelsea’s last game against Spurs – which actually ended in a 2-1 win at Stamford Bridge: That will be none.

Willing and able
It’s been a while since Mediawatch has turned its gaze towards The Sun’s Daniel Cutts and his exclusively online Manchester United exclusives, but his ‘exclusive’ claim that ‘ROMELU LUKAKU wants to join Juventus this summer if he is forced out of Manchester United’ made us laugh out loud (if only there was a shorter way of saying that).

Apparently, ‘the Belgium forward would be willing to join Juventus to link up with Cristiano Ronaldo and Co’, which is one help of a scoop from Cutts.

Presumably, he thinks we have all collectively forgotten the interview Lukaku did in October in which he was actually asked about joining Juventus and said: “Why not? I hope it happens.”

No shit he ‘would be willing to join Juventus’.

The Magic Number
Daniel Cutts’ astonishing claim is not the only Manchester United exclusive on The Sun website, with Neil Custis and Richard Moriarty combining to tell us what Ole Gunnar Solskjaer said to his United players about Liverpool.

They quote a United source saying: “Ole was very blunt about Liverpool with his players and clearly believes they do not have enough to beat City to the title. He thinks they are very one dimensional, lacking creativity. He certainly has faith that his team are a better outfit.”

Stick that through the Daily Mirror website machine and what is the headline?

Consider that our own scathing three-word review.

Ooh la la
Just when you think there are no new angles on the title race:

‘From Patrick Vieira to N’Golo Kante, French players have enjoyed huge success in the Premier League. Indeed, if Liverpool become champions in May, they would be the first team to do so this century without using a French player.

‘Liverpool boss Jurgen Klopp isn’t anti-French of course. He’s been a leading critic of Brexit and tried to sign Nabil Fekir from Lyon, one of Didier Deschamps’ World Cup winners of 2018.’

And this could be Mediawatch’s favourite line in the whole of football journalism:

‘It’s well-known that Klopp is trying to bring home Liverpool’s first league title for 29 years. But it’s not the only piece of history the Frenchless manager is trying to reverse.’

Mediawatch (a Frenchless column) now backs any move to use ‘the Frenchless manager’ at any and all junctures when referring to the (Frenchless) Liverpool manager.

Altogether now: 'We bet he is.' pic.twitter.com/8EDn9gz7SQ

Recommended reading of the day
Marina Hyde on Kepa, Chelsea and a soap opera