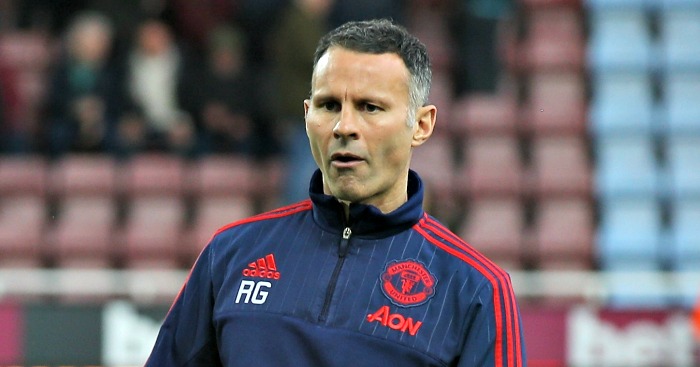 Get the lawyers on the phone
The Sun have embarked on some very committed reputation-smearing in the last week, but Tuesday’s example takes the biscuit.

The story concerns Ryan Giggs, and is found on their Dream Team FC page. To say it’s inflammatory is an understatement.

‘Ryan Giggs is set to join ITV2 reality show Love Island,’ the story begins. ‘The Welshman recently parted ways with Man United after 29 years of service. And it seems with football out of the way he can focus on his true passion in life – shagging. The dynamic of the show requires the islanders to steal other contestant’s partners, something Giggs should have no problem with.’

Woah there. This is pretty obviously LAD bantz wrapped up as ‘news’, but we’d be careful about the libel; Mediawatch knows a thing or two about that. It goes on…

‘One of the show’s producers, Lee Satchel, had this to say: “We didn’t approach Ryan, he approached us. He said he’s got his eye on Kady, Olivia, Emma and Tina. Although he also fancies Sophie, Cara, Liana and even hostess Caroline Flack.

‘“He also said a few of the camera crew were pretty fit. Basically he’s up for anything. All the Giggs family will be watching Ryan’s actions closely, except his brother of course…”

‘There are also rumours that John Terry may make an appearance later in the series.’

Are The Sun really that desperate for clicks that they’re prepared to put this sort of guff out? (It’s a rhetorical question – we know)

Yeah, about that Wayne

“I’ve known for a few years that I can be at home there. I have played there a few times throughout my career and I can play that position. I have played and watched Paul Scholes play that role for years” – Wayne Rooney, April 24.

“Sometimes you have to make choices in your career and at the moment it’s better for me to play deeper. It could be a bit different for England where I could still be the striker but probably next season that’s where I see myself playing” – Rooney, May 17.

“I’ve played in midfield for the last few months at United, and it’s a natural way of football. It happens. I feel with my football intelligence, I can play there and further my career there as well” – Rooney, June 10.

“I have played with some of the best midfielders England has produced in Steven Gerrard and Paul Scholes and I’m not so naive to play with those players and not notice what they were doing, knowing that one day I would be playing in that position” – Rooney, June 20

“Maybe Rooney is not a striker anymore, or a nine, but with me he will never be a six playing 50 metres from the goal. He will be a nine, a 10, a nine and a half, but not a six or eight. You can tell me his pass is amazing but my pass is amazing too without pressure” – Jose Mourinho, July 5.

Gerrard and Scholes can breathe a sigh of relief.

‘To see Manchester United’s skipper spraying the ball about left, right and centre made you wonder whether Paul Scholes was on the pitch wearing a Rooney mask. His selection of passes, vision and execution were of the highest quality’ – Neil Moxley, Daily Mirror, May 22.

“I love Rooney in midfield. I’ve said this on many occasions. I started to say it two years ago about him going into midfield and the funny thing about Twitter is you can gauge people’s reactions straight away. But Rooney can play the same role as Paul Scholes used to play, he’s developed the engine to get up and down and is getting better and better. To have someone with his ball skills, his vision in the game, to run the game, he sees stuff that no-one else sees” – Peter Schmeichel.

You both nailed it to an equal level.

“It’s not a moment to talk about individuals. Cristiano works for the group which is the important thing. We are 23 players. He’s scored two goals — probably we were expecting more, it’s true. But it’s not the moment to put pressure on a player and place him in doubt, because he has demonstrated his quality and is working for the group and helping in the Euros.”

And your The Sun headline?

Quick question, guys: Why is the word ‘flop’ in inverted commas?

Sale of the century
Strap in folks, for Charles Sale’s ‘Sports Agenda’ column in the Daily Mail has some breaking news. It involved…erm… a stuffed lion toy.

‘The final word on Leo the Lion, England’s doomed Euro 2016 mascot — it’s emerged the player carrying Leo had been voted the worst performer in training,’ Sale writes. ‘Those chosen included Chris Smalling, Jack Wilshere, John Stones, Wayne Rooney and Joe Hart, of whom only Smalling had a reasonable tournament.’

‘Fluffy England mascot Leo the Lion is awarded to the worst trainer in the Three Lions camp. The cuddly toy has been seen being paraded around France with the England team throughout Euro 2016. Defenders Chris Smalling and John Stones have both been seen taking care of Leo, while captain Wayne Rooney is the latest man to be tasked as being his carer.’

It ‘emerged’ a hell of a lot sooner to everyone else, Charles.

‘I’d love to do it. The chances of it happening are very slim, I know that. I would love to have the opportunity to work with a young manager, if they want to bring one in. I could be around to provide some knowledge, experience with a bit of personality.’

As ever, cheers Peter

Sweat on the small things

Big problem for Man Utd with Pogba remains persuading him to leave Juve and come back to them. Plus all the fees..

The One and only

Jose Mourinho #mufc press conference. He'll be desperate for a new catch phrase. The Special One. The Happy One. What next? The United One?

It’s definitely Mourinho that’s desperate for the catchy moniker. Weird that he didn’t mention it in the actual press conference.

Little miss trouble
Mediawatch isn’t saying that the Metro need to update the ‘Don’t miss’ section on their football homepage, but the second top story is ‘5 things Man Utd fans should know about Breel Embolo as transfer edges closer’.

He joined Schalke ten days ago.

Cheerful line of the day
‘Euro 2016 has been a tortuous, over-long, lopsided, negative tournament played out by tired-looking footballers’ – Dave Kidd, Daily Mirror.

But other than that you’ve enjoyed it, Dave?

Recommended reading of the day
Chris Wathan on the night that brought Wales together.