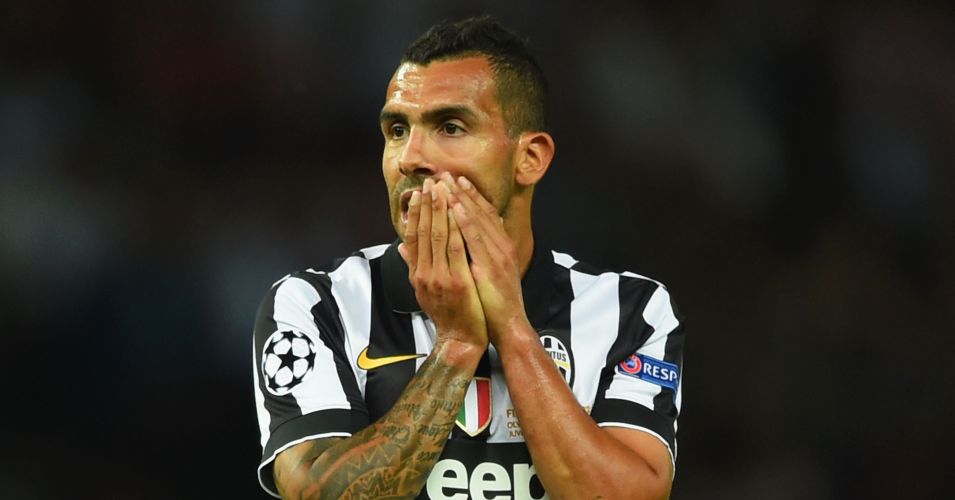 Carlos Tevez to enjoy one final Juventus hurrah, Ian Wright channels his inner Usher, and we have the definitive answer on Leicester’s improvement; clapping…

Carlito’s Away
Top work from the Metro in their preview of Manchester City vs Juventus. They select the ‘key men’, one player from each side who will be most important in altering the course of the match.

For City that man is Wilfried Bony, who will continue to deputise for Sergio Aguero. Fair enough. For Juventus, they’ve plumped for Carlos Tevez. That’s the same Carlos Tevez who left Turin for Boca Juniors in June.

‘Bony’s performance will be compared directly to that of Juve marksman Carlos Tevez,’ the article reads.

C-C-Called A U-Turn
“I haven’t got a clue what Van Gaal is trying to do. What’s their system? Surely Manchester United have got to play with a bit more pace and thrust and tempo. They seem desperate” – Ian Wright, August 30.

‘Confidence could not be higher at United right now. I just sense a new wave of optimism beginning to flood through Old Trafford. And, as much as they are in transition, there remains a winning mentality throughout the whole club’ – Ian Wright, The Sun, September 15.

It’s almost as if he just changes his entire stance to match the last result.

Shaw Thing
‘Rarely have I seen a team struggle so badly because of the absence of one player’ – Adrian Durham on Ryan Shawcross in the Daily Mail.

Hs is a fine defender, but let’s not pretend that Shawcross’ absence is the only reason for Stoke’s early-season struggles.

Happy Clapping
Do you think you know why Leicester City are playing well? Do you think it’s because they bought some excellent players? Or because Riyad Mahrez is playing wonderfully well? Or because of the togetherness generated by the desire to avoid relegation? No, no and no. You’re wrong.

According to Graham Bryce in The Sun, the answer lies not in the players or manager, but in some pieces of cardboard. Oh yes.

‘The turning point came last April as club chiefs pondered how to pump up the volume following a dismal goalless home draw with Hull,’ Bryce writes. ‘After discussions between the club and fans, Leicester literally took their fate into their own hands by placing clap-banners under every spectator’s seat.’

‘The concertina-style cards fold into a fan shape and are whacked against outstretched hands to create a slapping noise. One clap-banner in the hands of a determined 10-year-old makes a racket… 30,000 of them going off at once creates mayhem. Suddenly there was a buzz about the King Power as the incessant drone of 30,000 noisy banners provided a heartbeat for the players.’

Apparently Leicester have given their opponents ‘decibel hell’. And there was poor Riyad Mahrez thinking it was down to him.

Mediawatch does have one question: What about the away games?

Anytime, Anywhere
In Tuesday’s Daily Mail, Martin Keown runs the rule over the ‘Stars to watch’ in the Champions League this evening. Thanks for letting us know that Gareth Bale, Neymar, Arturo Vidal and Yaya Toure might be worth keeping an eye on.

Mediawatch does give Keown a bit of stick for the dearth of insight his average efforts provide, but today he surpasses himself.

Sit back and learn how ‘At Real, it’s all about Cristiano Ronaldo’, ‘Sergio Aguero is a match-winner’ and ‘Neymar is an absolute nightmare to play against’. Thanks for that.

However, it was the assessment of Arturo Vidal which tickled Mediawatch: ‘This guy can play anywhere’.

Mediawatch’s interest was piqued. What was this new approach? Play the kids? No central defenders? Strap Olivier Giroud to Theo Walcott and hope to get away with them counting as one player? No, weirdly.

“The Champions League is a competition that we really love. We want to go as far as possible but we have to go step by step,” Cazorla is quoted as saying.

“We have the example last year against Monaco. Many said that we were the favourites to go through but they showed us that in the Champions League if you are not at your best you’re out. In this competition you face the best teams in Europe – this season we have to go step by step.”

That’s right, Arsenal’s ‘new approach’ is to take each game as it comes and play at their best.

‘International star’s message to Louis van Gaal’ – Daily Star. It’s Ashley Young. He hasn’t even played an international match in over two years, so ‘star’ is one helluva push.

‘Arsenal transfer target is as good as Messi and Ronaldo, claims top winger’ – Metro. Isn’t Zlatan Ibrahimovic famous enough to be referred to something other than just ‘Arsenal target’? Especially when he isn’t an Arsenal target.

‘Chelsea star Pedro takes swipe at Manchester United’ – Daily Star. “I had options, but this was the best.” Swipe.

Mediawatch wasn’t aware that Sherlock Holmes had got a gig at Goal.

Derek McGovern Line Of The Day
‘What makes a great club?… According to me it must have a European lap dancer’ – Derek McGovern, Daily Mirror.

Runner-Up:  ‘All I ask of a woman is that she’s kind, has a sense of humour and likes football. Is that too much to ask of a sex kitten?’ – Derek McGovern, Daily Mirror.

Opening Paragraph Of The Day
‘Jose Mourinho and his Chelsea players have banned all banter as they attempt to arrest the club’s worst start to a top-flight season for 29 years’ – Matt Law, Daily Telegraph.

It makes us laugh every time.

Unfortunate Cut-Off Of The Day
From a site not a million miles away from here:

Put him in a cold shower, for goodness sake.

Non-Football Story Of The Day
‘A man took 35 Viagra for LOLs and ended up with a five-day erection.

‘Daniel Medforth downed the pills ‘for a laugh’ when he was at a friend’s house on bank holiday Monday.

‘But the 36-year-old plasterer was scared stiff (…sorry) when he became sick, dizzy, and even started hallucinating.

“’Everything I saw was green,’ Daniel, from Withernsea in Yorkshire, told the Sun. “And I had a massive erection that would not go away.

‘”It wasn’t a permanent erection but every time I brushed against something for five days it sprang into life.”

‘Daniel eventually came clean to his shocked wife, who called an ambulance for him’ – Metro.

Thanks to none of you. If you spot something that belongs on this page, mail us at theeditor@football365.com, putting ‘Mediawatch’ in the subject field.