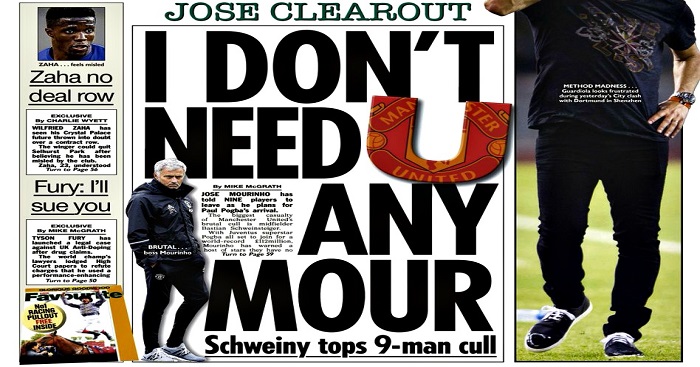 Counting with The Sun
On Thursday afternoon Mike McGrath of The Sun wrote that ‘Jose Mourinho begins his summer clearout as he informs eight players they can leave Man United on loan or permanent’, leading with the slightly underwhelming news that ‘ANDREAS PEREIRA has been told he can be loaned out in Jose Mourinho’s massive clear-out today’. If it really is a ‘massive clear-out’, you would expect a slightly more exciting first victim than a player with 93 Premier League minutes under his belt.

‘Pereira, 20, has been told he does have a future at Old Trafford but will be told to go on loan to get first-team experience,’ writes McGrath, before adding the names of James Wilson, Tyler Blackett, Guillermo Varela (who has already left), Bastian Schweinsteiger (‘among the senior players at risk’) and Adnan Januzaj (‘impressive in training sessions’).

The eagle-eyed mathematicians among you will have spotted that McGrath has only actually mentioned six players. And you may also note that one of that six has already gone (odd as Jose only ‘began’ his summer clear-out on Thursday), two more spent the majority of last season out on loan, and the two more senior names sound sketchy at best. It’s almost like – and stop us if this sounds crazy – McGrath (along with the Mail’s Joe Bernstein) has been given the Pereira news, realised that Pereira alone would not garner clicks and taken a guess at a few more players based on them not being involved in first-team training. Voila. You have EIGHT PLAYERS leaving in a ‘massive clear-out’.

Except McGrath clearly only mentions SIX players, so here’s The Sun’s tweet on the story…

Add a picture of the not mentioned but surely leaving Will Keane – for that’s him between Gullermo Varela and James Wilson – and you only get to seven, so what to do? Just add a picture of Jose Mourinho, that’s what. And presume that no Sun reader can actually count. Which is fair.

Later on Thursday, The Sun clearly decide that a) they need a back page and b) six (names) or seven (pictures) or eight (headline) is just not enough. So…

You will notice now that Schweinsteiger is no longer ‘among the senior players at risk’ but the ‘biggest casualty of Manchester United’s brutal cull’. That accelerated bloody quickly.

And that’s how we get to NINE – by including two fringe young players in McNair and Borthwick-Jackson who are also ‘under threat’. It should also be noted that Januzaj has now moved from ‘impressive in training sessions’ to ‘fears he could be axed’. What a difference a few hours and the prospect of a back-page lead can make.

Now we really do have a nine-man ‘brutal cull’, which features nine players who started a grand total of 27 Premier League games last season. This is Ming the Merciless levels of brutality.

Fosu-Mental
Joe Bernstein of the Daily Mail attempted to coin a new phrase – ‘clear-out Thursday’ – in his report on the goings-on at Carrington. It won’t catch on. Unlike The Sun’s McGrath he plumped for ‘nine’ as his magic number early in the proceedings, and he did not even have to resort to the inclusion of a player who left on July 23. So who is his ninth victim of ‘clear-out Thursday’?

In the newspaper version of the Mail, we read:

‘Youngsters Cameron Borthwick-Jackson and Tim Fosu-Mensah, who both impressed under Louis van Gaal last season, have been told they are not in the Portuguese manager’s plans for the coming season.’

What? Surely not? Along with Marcus Rashford, Tim Fosu-Mensah was the most impressive of the crop of youngsters brought though by Van Gaal. The fans won’t like this…

If Fosu-Mensah is to be sold then I'm looking forward to the transfer window of 2021 when we spend £200m to bring him back. #WelcomeTim

But what’s this? An update on the MailOnline version of the story on Friday morning…

‘Cameron Borthwick-Jackson, who impressed under Louis van Gaal last season, has been told he isn’t in the manager’s plans for the coming season while Brazil Under 20 midfielder Andreas Pereira has been told to go out and gain first-team experience on loan in order to fight for a place at United in the future.

‘Tim Fosu-Mensah also trained with the Under 21 squad but could earn a reprieve from Mourinho once he recovers from a calf injury.’

‘Been told they are not in the Portuguese manager’s plans for the coming season’? Or simply not in the footage of first-team training because he was injured? Mediawatch understands that the two can be easily confused.

‘Clear-out Thursday’? Sounds more like ‘cock-up Thursday’ to us. Now that could stick.

Haircut 112
The Daily Mail have given it large on their back page with the world’s 427th claim that ‘£100M POGBA ‘DONE”. They then tell us ‘WHAT YOU GET FOR £100m…’ with a run-down of his statistics and honours, including four consecutive Serie A titles.

The Sun have taken a slightly different tack (and price) with their ‘WHAT EXACTLY DO YOU GET FOR £112M?’ spread.

First on the list of things Manchester United will get for their £112m?

THE HAIRCUTS. Of course.

Then there’s THE CLOTHES, THE FRIENDS, THE CARS and SOCIAL MEDIA before…

‘ON the field, the 23-year-old has proved to be the key provider in Italy’s Serie A – assisting more goals than any other Juventus player since his debut back in 2012. The French Euro star also recorded more assists than any other player in Serie A last season with 12. Now that’s impressive!’

And what a fantastic bonus that he can play football as well as have funny hair, ‘snazzy’ clothes, famous friends, ‘amazing rides’ and 2.16m Twitter followers.

Ask the experts
But is he worth the money? The Sun ask all the big questions of the all the big experts. So who did they consult about Pogba’s worth as a potential £112m French footballer? An expert in Italian football? One of his French football coaches? A transfer expert?

Of course not. Why ask them when you have numbers for former Coventry City manager Bobby Gould (who last managed in the Premier League in 1993) and ex-West Ham footballer Billy Bonds, who last played in 1988?

For the record Gould thinks that Pogba is worth the money, largely on these grounds:

Deputy Dog
Writes Craig Hope in the Daily Mail: ‘NEW Sunderland boss David Moyes may have to kick off the Premier League campaign without a recognised striker as Jermain Defoe is set to miss the rest of the club’s pre-season schedule.’

Careless whispers
The partnership between Sky Sports and Football Whispers goes from strength to strength. For 25 minutes there, Ricky van Wolfswinkel was nailed on to join Birmingham. 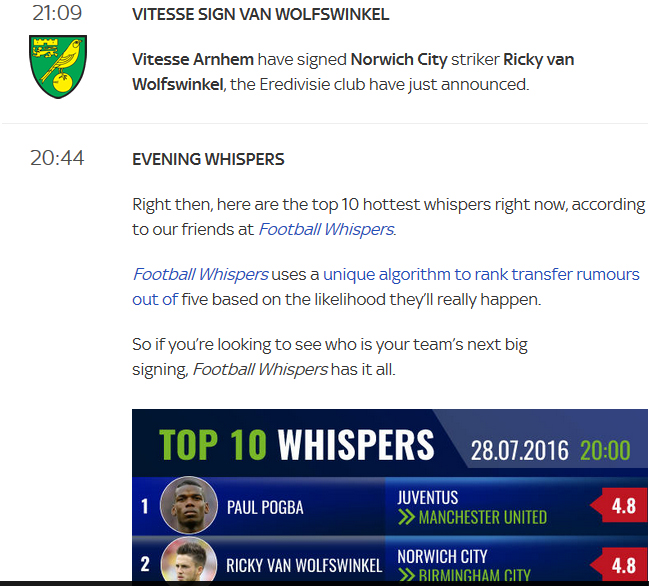 Thanks to our Mediawatch spotter Brian McGregor. If you spot anything that belongs on this page, mail us at theeditor@football365.com, putting ‘Mediawatch’ in the subject field.