Home Arsenal Mediawatch: The Ozil story has a happy ending…

Some stories can have a happy ending. Just ask Mesut Ozil, now worth more than two bob... 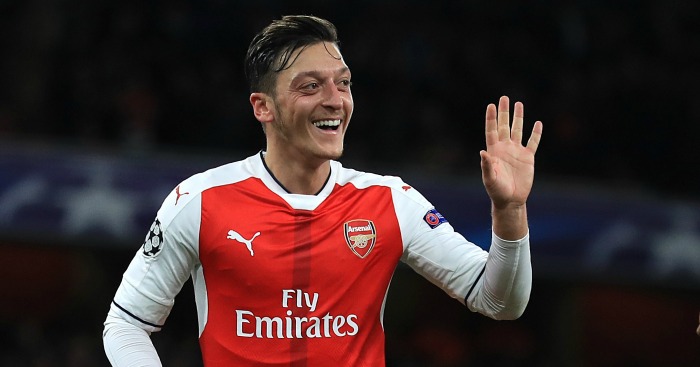 Breaking news
‘Revealed: The mystery Chelsea fan caught on camera in her club’s coat… at Everton vs Manchester United!’ – MailOnline.

Question: Does this story include pictures taken from the fan’s social media accounts of her in a bikini?

This might be a new high, actually. For that ‘ex-Chelsea ace’ is Zech Medley. Medley is 16 and was allowed to leave Chelsea in October.

‘At £42.5m Mesut Ozil is the most expensive export in the history of German football. After his performance in Munich you wouldn’t pay two-bob for him… The days when he drifted in and out of games with Real are behind him. Now he just looks like a lost soul, lazy and disinterested… Ozil, the highest-paid player in the history of Arsenal, is nicking a living’ – Neil Ashton, Daily Mail, March 2014.

‘SIGN ’em up, Arsene. It really is that simple… To be taken seriously in the Champions League draw hall on Monday, you need players capable of turning the biggest games. Arsenal fans have been spoiled over the years with some of the finest players in world football. Ask any Gunner to name their all-time favourites and Liam Brady, Tony Adams, Dennis Bergkamp, Thierry Henry and Ian Wright trip off their tongues. Ozil and Sanchez are in there now.

‘The contract rebels are holding out for eye-watering money before they commit their future to the Emirates. With every mercurial pass, with every mesmerising chip, their cases get stronger and stronger. They want the big money. Boy, they have earned it’ – Neil Ashton, The Sun, December 2016.

It’s like It’s A Wonderful Life, Officer And A Gentleman and The Lakehouse all rolled into one. Forgive Mediawatch while it wipes a tear from its eye…

Do you ever think we’re putting too much pressure on young players?
‘POETRY IN MOTION Real Madrid’s newest star is SEVEN-year-old Byron hailed as the ‘rough diamond’ of club’s academy,’ reads the top story on The Sun’s football homepage on Wednesday morning.

Bounce around in a circle, get down with me

“In my opinion the Europa League is not an attractive competition. That is my personal opinion, I’m not talking about anyone else, it’s my personal opinion and as Mauricio Pochettino there is no interest in the Europa League. That is my opinion, not the club’s opinion. I think it is a competition that kills you” – Mauricio Pochettino, February 2014.

“It is a great opportunity to gain more experience there and make it our home. Also for the squad it is important to be involved in different competitions. The younger players need this experience in Europe. It’s a good opportunity to win a trophy” – Pochettino, December 2016.

You’ve got to admire that positive spin.

‘Dembele’s poorest display of the Champions League group stages. The striker missed an excellent chance in the first half and never really got the better of a makeshift Manchester City back three’ – Craig Fowler, The Scotsman.

‘The Celtic teenager has been linked with a host of Premier League sides this season after continuing his goal scoring streak in Scotland, but he lacked composure against City. Dembele was withdrawn after 72 minutes for Leigh Griffiths with Celtic chasing the game at 1-1 and will surely have gone off thinking he should have done better’ – Coral Barry, The Metro.

‘Wasn’t his best night in a Celtic shirt. Posed a threat to City but was wasteful early on with good opportunity in front of goal’ – Scott McDermott, Daily Record.

‘Never really got the better of the City central defenders. Really should have scored but missed a sitter after seeing a first attempt saved by Caballero’ – Goal.com.

‘The scouts were out in force at the Etihad. Arsenal, Liverpool, Manchester United and Tottenham were among those represented from the Premier League while Paris Saint Germain and Red Bull Leipzig were also keeping tabs. They are all watching Celtic striker Moussa Dembele whose performances in the Champions League have made him one of the most sought after young players in Europe… His all-round performance was fun of energy, running and the scouts would have gone home with glowing reports’ – John Cross, Daily Mirror.

Having a pop
‘Emmanuel Petit claims Arsenal are only FOURTH favourites for the Premier League,’ reads the headline on the Daily Mirror website. ‘The World Cup winner and Gunners legend really sticks the boot in,’ the tagline says.

So, how did Petit ‘stick the boot in’?

“Arsenal can compete for the Premier League title. But I see Liverpool, Chelsea and Manchester City with a better chance.”

Wow, what a plonker Petit is for saying that. Because when you look at the odds for the Premier League title, Arsenal are actuall…oh, they’re fourth favourites behind Liverpool, Chelsea and Manchester City. As you were.

A stain on the game
Players not celebrating against their old clubs is a disease on a fine sport, but it might have peaked. On Saturday, Allan Nyom celebrated West Brom’s third goal after being booed by Watford supporters. Cue this this statement on Tuesday:

“I just want to apologise to the Watford FC fans because, unfortunately, it seems that my celebration during the Saturday game was considered as a lack of respect. Sincerely, it never was my intention to disrespect the club or the fans, and I apologise to them if they have felt it. In my heart there is only gratitude and my best wishes for all Watford FC family.”

Nyom played 36 times for Watford, after being shunted from one Pozzi family-owned club to another to another and then sold to West Brom after one season.

When will the madness end?

‘FA set to announce most lucrative kit deal in England’s history… The American sportswear giant replaced Umbro in 2013 and their decision to not only extend but also enhance their association with the FA comes as something of a surprise given England’s disastrous exit from last summer’s European Championships ’ – Guardian.

‘FA suffer England kit-deal squeeze… The FA will pay the price for England’s woeful performances at the last two major football tournaments in an expected extension of their kit-supply deal with Nike until 2030’ – Daily Mail.

“Alexis Sanchez, for me, is not an out-and-out striker. He can come from wide. He is more dangerous coming from wide. Sanchez and Hazard are quite similar.”

‘Chelsea legend names the one Arsenal star who compares to Hazard.’

. @Arsenal @ChampionsLeague Should we just book our travel to London now? ? pic.twitter.com/qkZvZZLsWQ