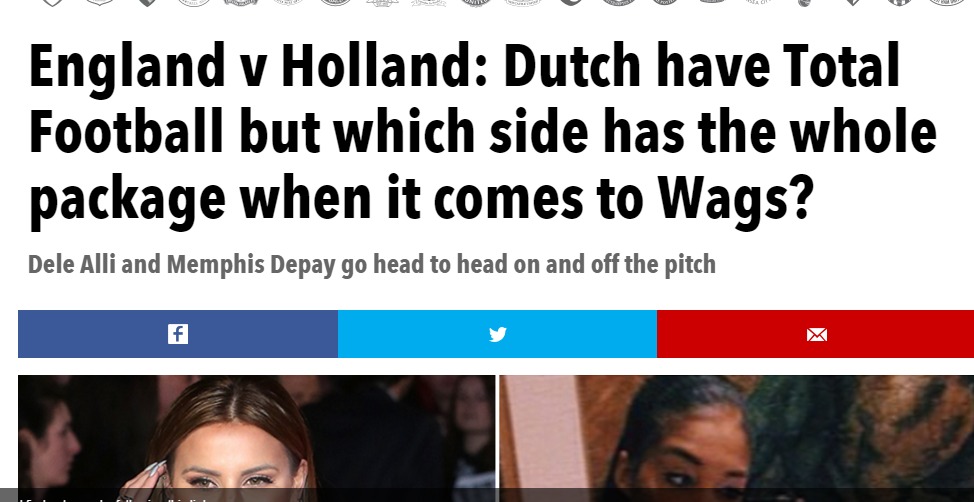 In what world is the above story worthy of publishing? The Sun’s world, that’s where. A world where it is always 1972.

Sun sh*te after the rain
Sorry, but we can’t leave The Sun’s story there. Because it’s awful.

‘Premier League aces Dele Alli and Memphis Depay go head to head in the clash, and while they are experiencing different success on the pitch, they have both hit the jackpot off of it,’ the piece reads. ‘The busty blonde proves that midfield sensation Alli still has the moves once his boots are off.’

‘THE SUN ONLINE IS NOW FREE,’ shouts a banner at the bottom of the page. Expensive at half the price.

And while we’re on that theme…
‘England and Holland fans dealt huge blow as Dutch star’s gorgeous Wag set to miss clash,’ reads another headline in The Sun.

‘Holland are expected to be without Wesley Sneijder for their friendly against England on Tuesday night. The Galatasaray star injured his hamstring ahead of the Wembley clash.

‘And the news is a blow to BOTH sets of fans – as the Dutchman’s stunning Wag is also expected to give the game a miss.’

Yes, they are for real.

Taking Le Tiss
England might be in ruder health than usual going into a major tournament, but don’t think that everyone is pleased. Oh no. Matt le Tissier is grouchy, for one.

“I can understand Roy being loyal to his players, but you can be sat on the bench at a big club every week and get in before someone who is playing every week at a so-called lesser team, and I think that’s something that needs to be addressed,” says Le Tissier.

Le Tissier’s bugbear is the lack of Aaron Cresswell and Mark Noble in Hodgson’s latest squad. The players keeping out Cresswell and Noble are Danny Drinkwater, Ryan Bertrand and Danny Rose. Do Leicester, Southampton and Tottenham really count as ‘big clubs’ being given preferential treatment?

“Everyone should be judged on what they produce every Saturday, and if a guy’s not playing every week, how can you judge him? You can’t accurately measure his form if he’s only coming on for 15 or 20 minutes, when other players might be tiring. It’s not a real form guide.”

Is that really a fair accusation to make of Hodgson’s latest squad?

The fewest league starts this season in England’s current squad are by Daniel Sturridge, Jordan Henderson, Danny Welbeck and Danny Rose. Three of those have been injured for long periods, while the other (Rose) has started 19 of Tottenham’s last 25 league games.

Incidentally, Rose has started nine league games since Christmas. Spurs have taken 25 of a possible 27 points in those games. If his inclusion is the biggest issue with England’s squad, Mediawatch would say Roy is doing okay.

Getting shirty
Mediawatch doesn’t particularly like the new England kit. Mediawatch also realises that it’s almost completely meaningless, a slight sartorial irritation but hardly worthy of any great wringing of hands. Mediawatch is not Mike Walters of the Daily Mirror.

‘Does it really matter whether our footballers wear rags or robes?’ Walters begins. ‘Actually, yes it does.

‘The England shirt is not available for hijack by marketing clowns or vandals of vogue. Like the national flag, it belongs to us all. Those Three Lions are not fashion accessories you can toss on an XXL T-shirt like the splatters on a plasterer’s radio.

‘If you mess with the England shirt to excess, you are messing with part of our national identity… It is unacceptable graffiti sprayed in the face of tradition. Hands off our Three Lions.’

Sticks and Stones
It’s easy to see why John Stones has a lot of goodwill. He’s young, he’s English and he’s ‘cultured’. He did try to engineer a move to a bigger club, but he’s not Raheem Sterling so we ignored all that nonsense.

In the Daily Telegraph, Jason Burt is the latest to talk up Stones’ England chances. He goes further than most.

‘John Stones is the missing piece in the England jigsaw; the one who can make this emerging new picture complete,’ Burt begins. Told you.

‘If the 21-year-old starts in central defence against Holland at Wembley Stadium on Tuesday evening, it must be hoped that, above everyone else in an England shirt, he delivers a convincing performance. But even if Stones does not do well then Roy Hodgson should stick with him for the Euros this summer.’

This really is big talk. A carte blanche to play badly but still be in the team?

‘The criticism of Stones has been excessive and has tended to focus on his mistakes rather than the gifts he has.’

Isn’t that sort of the point of criticism?

‘Stones could be that final piece. He is the defender England need more than any other for the progressive and positive way they want to play: one who is comfortable in possession and who is instinctively willing to bring the ball out from the back and who can fit these pieces together.’

Mediawatch generally agrees that it would be nice if Stones could be England’s present and future, but you can hardly blame Hodgson for sticking with Chris Smalling and Gary Cahill. One will be captain if Wayne Rooney is dropped, and the other is England’s most in-form central defender.

Also, this Stones carte blanche would be a lot easier to accept if he was, y’know, playing well. He’s started one league game at centre-back for Everton since January 24, and was substituted at half-time. Since his knee injury in September, Stones has been involved in two league clean sheets at centre-back in 15 matches, against the Premier League’s bottom two clubs.

Picture of the day

Wow. Thank goodness I got my genes! pic.twitter.com/cBK3oCOJ0q

Dig of the day
‘Providing I can convince my bosses to go three weeks without filing any updates about Jack Wilshere’s gammy leg or 5 things we learned about Jurgen Klopp’s latest touchline celebration’ – Joe Lewis, Daily Mirror.

Recyclable headline of the day
‘What should Liverpool fans make of this transfer rumour?’ – Metro.

That it’s probably a load of old arse. Happy to help.

NB – That is actually the answer in the story above.

That nickname was always going to come back and bite Chris Coleman.

Recommended reading of the day
Paul Doyle on Fulham.

‘All Blue Daze’ on Eintracht Frankfurt