Home Mediawatch Why are The Sun using Henderson to push ‘desperate’ agenda? 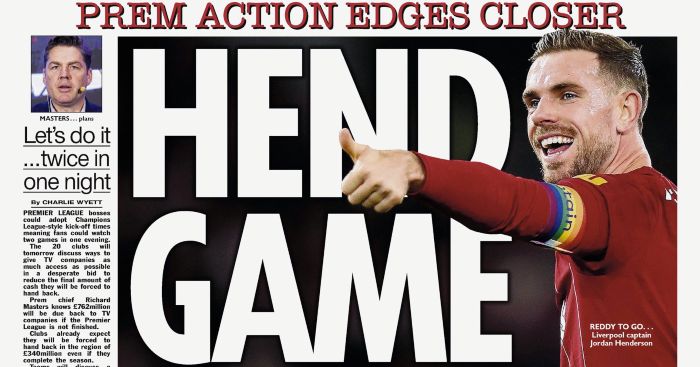 The Sun are ‘desperate’ for the Premier League to return. And they are happy to vocalise that through poor Jordan Henderson.

Boo-nited
‘The spooky nature of football without fans does NOT scare Manchester United.’

Pray tell, Neil Custis: is that an EXCLUSIVE?

‘Desperate’ measures
After the Daily Mirror‘s attempt to put unnecessary pressure on players to unanimously support the return of the Premier League, The Sun dutifully take up the mantle on Wednesday.

‘HEND GAME’ screams a back-page headline that carries quotes from ‘Kop cap’n’ Jordan Henderson, who will hopefully take severe legal action against such a descrip’n.

Now, for Jordan Henderson to ‘claim’ such a thing, he would have had to speak with literally every Premier League player. Do Troy Deeney and N’Golo Kante ‘feel incredibly safe’, for example? You cannot use such a catch-all term otherwise. But carry on.

‘The Liverpool captain, who is on the verge of lifting the title, is desperate to get Project Restart completed.

‘He was among the players who spoke with league and PFA bosses yesterday and pledged their determination to get back as soon as possible.’

But what is it Henderson actually said?

“The majority of players would agree how safe they have felt once they got back in. Hopefully that will continue until the next phase comes in.”

So he has been impressed by the safety measures implemented at Liverpool during the first phase of the Premier League’s return. And, crucially, he is “sure other clubs” have done the same. Which means he doesn’t actually know.

Look at how his words have been manipulated, too. ‘Prem stars’ is immediately reduced to “the majority of players”, ‘incredibly’ is randomly crowbarred in alongside “safe”, and ‘determination’ is replaced by hope that the first phase of a return bodes well for the future. And one does not use the word “hopefully” to denote ‘desperation’.

Mediawatch does not doubt Henderson and many, many other players are eager to return. But the key is that they will only want to return if it is safe for themselves and their families. What use is a sub-headline of ‘PREM ACTION EDGES CLOSER’ when full-contact training hasn’t even resumed yet?

At what point will journalists and newspapers stop using footballers to vicariously campaign for the Premier League’s return? It must be pure coincidence that football restarting would make their jobs far easier…

Better together
‘Jordan Henderson says there will be more to come from the ‘Players Together’ initiative after the movement raised millions of pounds for the NHS’ – Daily Mail, Dominic King.

But do you mean that ‘laughable smokescreen’ led by players who ‘didn’t want to help’? Hopefully Simon Jordan will get involved, too.

All together now: “No chance. Absolutely no chance. Sorry for killing that story!”

Echo chamber
The Liverpool Echo, credit to them, go with the pretty tame ‘Kylian Mbappe lavishes praise on Liverpool and makes Jurgen Klopp admission’. And that is fair enough because that really is precisely what he did.

But then they spoil that a little with this headline on Joe Rimmer’s opinion piece:

What ‘dilemma’ does Klopp face? That he ‘might have to get ruthless at some point’ by replacing players. But Mbappe’s ‘price alone is enough to put anyone off’. So…

To reiterate for the 427th time: Liverpool won’t sign Kylian Mbappe. They wouldn’t have signed him before a global pandemic that has crippled football’s finances. They certainly won’t be throwing £600,000 a week at a player and upwards of £200m at a club after ruling out the prospect of major summer transfers.

The only ‘dilemma’ here is how outlets come to terms with it.

‘The problem with the great rivalry in German football is that it isn’t really a rivalry. Borussia Dortmund are no longer Bayern Munich’s rivals. They’re an occasional nuisance.’

The same can presumably be said of West Ham with regards to Tottenham, then? Or maybe Everton and Liverpool? Or are you talking rubbish?

‘For much of the first half here, they appeared dangerous. And then Munich scored and never looked back. The game was over – quite possibly the league, too.’

In the 47 minutes after Kimmich’s goal, Dortmund had six shots (three on target) to Bayern’s five (one on target). They probably ‘looked back’ at their non-rivals just a little bit.

Express delivery
After so recently having their wrists slapped over publishing a pre-written and inaccurate article designed to harvest clicks from Google, you might assume the Daily Express website would take a few more steps to act appropriately in the future.

Either that or they would try and benefit from the death of a 23-year-old footballer.

This is absolutely dreadful from the Daily Express website.

'How did Christian Mbulu die? Cause of death' is their most-read story.

To recap: ‘Christian Mbulu dead: How did Christian Mbulu die? Cause of death’ is the most-read story on their website. By the first paragraph, we are told that ‘the cause of death of the young footballer has not been revealed’. Because it is unknown. So why publish an article with a headline and URL that you know people will be searching when you don’t know?

SEO-baiting a player’s testimonial is cynical. But doing the same for a player’s death is despicable. Be better.

Recommended reading of the day
Joshua Kloke on Alphonso Davies (£)

Recommended listening of the day
The Guardian on Jeff Hall.

jordan henderson mediawatch The Sun
Your browser is out-of-date!