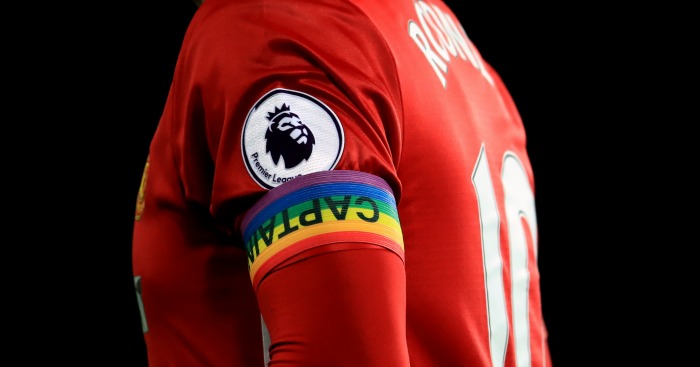 You know it’s a slow news day (in international week) when…
The story at the top of MailOnline’s football homepage concerns a confrontation between the managers of Hibernian and Morton.

Come back, Premier League football. You are not perfect but by God we miss you.

BREAKING: Arsene Wenger says he will not make an announcement on his @Arsenal future today. #SSNHQ

Thing nobody expected to happen today has not happened today.

‘BREAKING: Apocalypse will not happen before tomorrow.’

Do as I say, not as they do
‘Chelsea vs Manchester United homophobic chants: Let’s remember Justin Fashanu before passing abuse off as banter,’ read the headline to Dave Kidd’s column in The Sun on Wednesday, a sentiment Mediawatch wholeheartedly agrees with. ‘Homophobic chanting must be driven from the game,’ the back page of the newspaper shouted out.

In that piece, Kidd describes honestly his own treatment of homophobia, and also by his paper, The Sun:

‘Fashanu first spoke about the issue in an interview with The Sun but later regretted it. Like many other media outlets, this newspaper probably wasn’t ready to handle the subject in a responsible manner back then.

‘Indeed, in the run-up to the 1999 Champions League final in Barcelona, we ran a back-page story about United basing themselves at nearby Sitges, a resort popular with gays.

‘Our headline read: “Away with the fairies.” Just 18 years later nobody would dream of publishing such an offensive headline. Attitudes have changed swiftly, vastly and infinitely for the better.’

Indeed Dave, The Sun certainly learnt their lessons that day. Lessons that most of us didn’t need to learn because we realised that headline was incredibly offensive. But still, better late than never.

And they were still learning those lessons by July 2006, when The Sun described Cristiano Ronaldo as a ‘nancy boy’.

And they were still learning those lessons in April 2008, when they headlined an interview regarding Derren Brown’s sexuality as ‘I’m A Mind Bender’.

And they were still learning those lessons in June 2010 when The Sun commissioned a YouGov survey in which it asked: “Should gay people be cabinet ministers?”

And, lo and behold, they were still learning those lessons in July 2010 when The Sun headlined a news story about Louie Spence attending a party at the Beckhams’ house as ‘Bender it like Beckham’.

You can forget ‘swiftly’, Dave, but here’s the more pertinent question: Are you absolutely sure you just didn’t join a newspaper that thinks homophobic banter is okay?

Baby if you’ve got to go away
‘Wenger has told club he’ll sign new deal,’ reads the Daily Mail’s headline on Thursday. Their website extends the fun to ‘Arsene Wenger tells Arsenal he wants to sign new contract and stay at the Emirates Stadium for two more years’.

‘Arsene Wenger has informed Arsenal that he intends to sign a new, two-year contract,’ Sami Mokbel writes. ‘Sportsmail understands the Frenchman told the club hierarchy that he wants to extend his stay at the Emirates Stadium during a meeting last week. The north London club are adamant that Wenger’s future will be resolved as a joint decision.’

Did Sportsmail ‘understand’ all that by reading the Daily Telegraph? For it was them who wrote last week:

‘Arsène Wenger wants to stay on at Arsenal beyond the end of the season and remains convinced that he can lead the club out of their worst period in his 21 years as manager. Wenger revealed after Saturday’s chastening defeat at West Bromwich Albion that he had decided his future and, while the club are well aware of his desire to fight on, a ­final decision has not been signed off and will be “mutual”.’

One to keep on file
From the Daily Star‘s exclusive on Arsene Wenger:

‘Starsport understands Wenger will announce his decision on whether he stays or goes after the clash with Pep Guardiola’s men.

‘A good result at The Emirates would boost Arsenal’s top four hopes and is likely to prompt Wenger to announce he will sign a new contract.

‘But another defeat is likely to pave the way for the Frenchman to announce he will leave at the end of the season.’

Twenty years, and a decision decided on the basis of one game. Draw and it goes on the next one?

Heart’s not in it
‘No England manager should have to run around convincing players to represent this country,’ begins Harry Redknapp’s column in the Evening Standard. ‘I would not have done it had I got the job and Gareth Southgate is right to only want people who see it as an honour.

‘It obviously depends on the circumstances of each individual. Crystal Palace’s Wilfried Zaha chose the Ivory Coast before meeting with Southgate and for some players, it is a genuinely difficult decision if, say, they moved to England at a young age but have family still in another country who are passionate about their kid representing his roots.’

Wow, that’s actually spot on. Top work, Harry. It does completely depend on the individual case, and family and roots are factors to consider. Good.

What’s that? You haven’t finished?

‘Like plenty before him, Zaha chose to represent a country that plays in the Africa Cup of Nations every other year and club managers are seeing that competition as a problem more and more. Who wants to lose a player or two for five weeks during one of the busiest parts of the season?

‘Eligible players who have been here for a few years would, hopefully, know enough about this country and its football traditions to want to play for England. I wouldn’t be chasing them. Most of the time, I would worry about any kid who takes too long to make a decision like that because you wonder whether they are in it for the right reasons.’

So it ‘depends on the circumstances of each individual’, but if they’ve been here a few years they should want to play for England and anyone who takes time over a decision isn’t in it for the right reasons. Cheers Harry.

This means war
Mediawatch does not doubt Andrew Dillon’s exclusive in The Sun that Chelsea are unsure which striker to target this summer. Dillon writes that Antonio Conte would prefer Alvaro Morata, while technical director Michael Emenalo favours Romelu Lukaku.

We don’t doubt it because this kind of thing is commonplace. That’s why transfer committees exist, for discussion (and disagreement) over potential targets. It would be more weird, and ultimately unhelpful, if manager and technical director had precisely the same list.

What did set off an alarm bell in Mediawatch’s mind was the language used by The Sun when the story is presented on their website. We are told, presumably with a straight face, that Chelsea are in ‘civil war’.

Chelsea are about to win the Premier League title in Antonio Conte’s first season. Do you not think ‘civil war’ might be a little strong?
Statue of limitations
Mediawatch understands that the bust of Cristiano Ronaldo was Great Football Content™ in a slow international week. It makes the back page of the Daily Mail, Daily Express, The Sun, Daily Star, Metro, The Times and Guardian, after all. To repeat: Sloooow week.

Top marks, though, must go to the Daily Mail, for managing to crowbar a link to Ronaldo’s partner on their back page and sounding more trapped in the 1950s than ever before.

‘His other half doesn’t look too happy about it,’ you see. Because she wasn’t jumping for joy about a statue in a photo when she isn’t even looking at said statue.
Sinister inverted commas of the day

“You should hear what he says behind my back…”

Misleading headline of the day
‘LUKAKU WILL STAY*’ – Daily Mirror.

When that asterisk explains that Lukaku only stays if Ronald Koeman was able to make the decision, it does rather make splashing the previous three words over a double-page spread a little naughty.

The Queen is dead.*