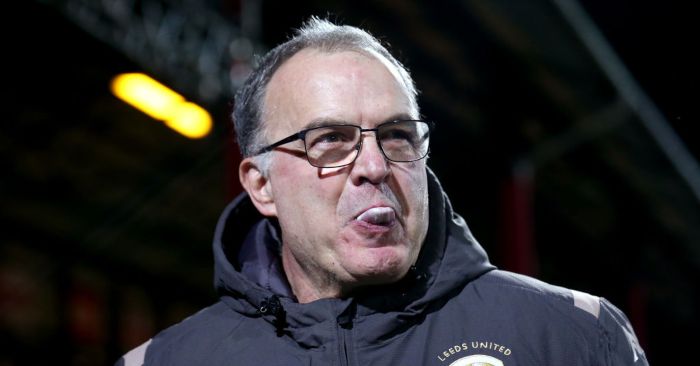 ‘FRANK LAMPARD has closed in on his first major signing as Chelsea boss – with Hakim Ziyech joining in a £38million deal’ – Andrew Dillon, The Sun, February 13.

Will Ajax be paying Chelsea by the time he actually joins?

‘Pep Guardiola and Mauricio Pochettino call him the best coach in the world.

‘But Leeds fans might wonder if Marcelo Bielsa is turning into a pound-shop Unai Emery.’

First, a reminder that Emery took over an Arsenal team that had finished 6th and was sacked within 18 months as they slipped to 8th and below Burnley.

Bielsa, on the other hand, took over a Leeds side that had finished 13th, 15 points outside the play-offs, and has guided them to two successive fights for promotion.

Even if this one ends in as glorious a failure as the last, ‘pound-shop Unai Emery’ is a load of b*llocks and you know it.

A few paragraphs follow in which Irwin makes some relatively fair points about the baffling persistence with Patrick Bamford, the form of Kiko Casilla and the ‘dour, stubborn’ nature of a manager who is ‘refusing to compromise’. Which sounds like every coach ever. Sir Alex Ferguson was notoriously cheerful and compliant, of course.

Mind you, we’re not sure Bielsa ‘quickly endeared himself to the locals by sitting on a bucket and spending so long in the Wetherby branch of Costa Cofee they boosted their WiFi to accommodate his internet access’. It was probably the really good football and notable improvement on what came before that did it.

But it is not long before the honest critique makes way for some predictable, tiresome and downright pathetic snide. Because there is nothing that pisses a national tabloid football journalist off more than a manager who uses a translator.

‘But don’t ask Bielsa to explain the slump unless you have the patience of a saint. I endured one of his recent post-match press conferences and it turned out to be the longest 30 minutes of my life.’

Try reading one of your articles.

‘At 64-years-old maybe it’s too late in his life for this old dog to learn new languages.’

‘He reminds me of an old British couple I recently met who proudly boasted of their inability to speak a single word of Spanish despite living on the Costa Brava for the past ten years.’

And what makes you think Bielsa has ‘proudly boasted’ about his struggle with the language? By all accounts it’s an area in which he wishes to improve.

‘It is hard to understand how he can possibly motivate his players without making any attempt to speak the same language.’

Then look at the league table. It’s clearly not been a problem since he was appointed. Except for the likes of you, who will continue to pretend he has not made ‘any attempt to speak the same language’, despite having literally no idea whether or not that’s true.

‘Poor old Emery was widely mocked for his ‘good ebening’ catchphrase at Arsenal but at least he had a go at speaking the lingo.’

And look where that got him. As you say, he ‘was widely mocked’ for attempting to speak a language he had not mastered. Sky Sports even took the piss.

Unai Emery says he understands the supporters expressing their dissatisfaction following his side's 2-2 draw at home to Southampton.

But no, let’s ‘pity the poor Match of the Day editors charged with getting a coherent soundbite from Bielsa on a weekly basis’.

Irwin is, of course, right that Bielsa has not won a great deal of championships throughout his coaching career.

‘His time in European football has been more notable for dramatic bust-ups at Napoli and Lille and a late-season collapse at Marseille,’ he writes. ‘Sound familiar?’

There are legitimate points to be made about Bielsa’s methods, approach and obdurate nature. They will obviously intensify if Leeds fail to get promoted. But his refusal to speak English in press conferences will not have contributed to that, even if it does make your job a tiny bit harder.

And the ‘pound-shop Emery’ is still second in a notoriously difficult league. It wasn’t a problem when Mauricio Pochettino opted to use a translator and it isn’t an issue when the person he calls ‘the best coach in the world’ does it.

Still, it’s not even close to the most ridiculous coverage The Sun have ever given Bielsa…

Gym accoster
When The Sun are not criticising a busy sexagenarian for not being confident enough to speak a completely new language in public, they are poking fun at a man for…rehabilitating after surgery?

‘The Manchester United midfielder has hardly played all season with an ankle injury and the last time he featured was on Boxing Day.’

That’s what surgery will do. Although no definition of ‘hardly played all season’ can include eight games.

‘But the French ace makes sure we know how hard he is working on his rehab by posting a stream of pictures on Instagram for his 39million followers.’

What a kn*b he is, the first footballer to ever have sponsorship deals.

The Sun would obviously be happier if Pogba didn’t post pictures of him rehabilitating in the gym (four in one week; shock horror!), thereby starving them of most of their content. Definitely.

Nuno brainer
‘Nuno Espirito Santo has dropped a bombshell on Wolves fans by revealing he has had not talks over a new deal’ – Dave Armitage, Daily Mirror.

‘Nuno Espirito Santo has held no talks with Wolves over a new deal’ – Dave Kidd, The Sun.

‘Man with 15 months left on contract to wait until end of current season before he and his employers evaluate their progress and act accordingly’ – Mediawatch.

To be Frank
Writes John Cross in the Daily Mirror:

‘The fight for fourth place in the Premier League has become a six-way struggle.

‘But the levels of pressure are far greater for Chelsea boss Frank Lampard compared to the rest.’

In terms of betting odds, Ole Gunnar Solskjaer is the second favourite in the entire Premier League to be the next manager to leave his post. So no.

Far away
“Newcastle have been very good away from home under Steve Bruce” – Charlie Nicholas, Sky Sports.

Newcastle are 15th in an away Premier League table. Only four sides have lost more games on their travels this season.