Raheem Sterling warned us and The Sun took offence. Plus Gareth Southgate 'needed to be harsh'. 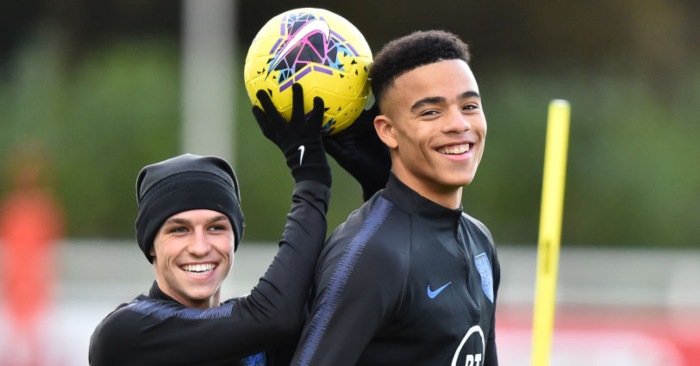 Raheem Sterling warned us; The Sun took offence. Plus Gareth Southgate ‘needed to be harsh’ on Mason Greenwood and Phil Foden.

#dontbuythesun
When Raheem Sterling dared to buy his mother a house and give someone a tour in the aftermath of his and England’s disappointing Euro 2016 campaign, he was described as ‘gloating’ and ‘showing off’ a ‘plush pad’. The Sun slapped ‘OBSCENE RAHEEM’ over their front page. An anonymous ‘Sun reporter’ wrote the following two opening paragraphs…

‘RAHEEM Sterling was once told by a teacher: ‘You’ll either end up in prison or playing for England.’

‘And while the £49million Manchester City star chose the latter route his short career has been plagued by controversy.’

…in a feature with this headline:

That article is astonishingly still up on The Sun’s website. Mediawatch would rather not link to it.

When Sterling then contrived to propose to his girlfriend, they reserved this headline for the happy couple:

Beautiful sentiment. And again, that story is still up on The Sun’s website. And again, Mediawatch shan’t be linking to it.

When Phil Foden, in his own words, ‘breached COVID-19 protocols put in place to protect myself and my England colleagues’ by inviting two women back to the team hotel while on international duty during a global pandemic, the same outlet produced this headline:

Feels like we wouldn't see this sort of headline for certain players in the same situation. pic.twitter.com/bkox09paH1

No ‘love rat’. Just ‘childhood sweetheart’. And no ‘footie idiot’ who is ‘obscene’ and ‘gloating’ but an ‘ace’ who just so happens to be a lovely son.

A reminder that when Sterling spoke out in December 2018, having been the victim of abuse from Chelsea fans at Stamford Bridge that same month, about how the use of certain prejudicial language, subconscious or otherwise, in newspaper reporting ‘helps fuel racism and aggressive behaviour,’ The Sun responded with the following:

‘Let’s get something straight.

‘The racist abuse of Raheem Sterling at Chelsea is not somehow The Sun’s fault. We hope those allegedly responsible get what they deserve.

‘We hugely admire Sterling’s talent. Our coverage of his off-field behaviour has nothing to do with his skin colour.

‘The suggestion is ridiculous and offensive – and the idea it inspired racists is baseless.’

It does not bear to think how they would have reported on the story if it had been Sterling in the same situation. Nor how little they will care that their biases have been made painfully plain for all to see.

Why so serious?
Over at the Daily Mirror, John Cross is not happy. This story is clearly not a mere molehill yet he has made an entire range out of but a single mountain.

‘KICKED OUT IN DISGRACE’ is the headline to his story, the opening paragraph to which reads:

‘Phil Foden and Mason Greenwood were sent home in disgrace with their England futures in serious doubt.’

Really? Their entire England futures? They surely won’t play in next month’s games and perhaps the fixtures directly after those, but the international prospects of a 20-year-old and 18-year-old are ‘in serious doubt’ because of one, albeit considerable, indiscretion?

Apparently, ‘Southgate has a history of excluding players for longer if they break rules.

‘Wayne Rooney and Kyle Walker have both fallen foul of Southgate’s discipline in the past and, while Foden and Greenwood will not be dumped for good, they may find themselves out in the cold.’

Rooney was named in November 2016’s England squad, dropping out from that due to injury two days before pictures emerged of him drinking at a hotel wedding party.

Southgate then opted not to choose him in March of the following year due to poor form and better alternatives. He tried to recall him that August but Rooney subsequently retired from internationals. At what stage did he ‘fall foul’ of anything?

As for Walker, wasn’t that the fella who played against Iceland on Saturday? He sure did look excluded.

There’s at least a bit of doubt that two of the best young footballers in the country will face permanent ‘exile’ from the side for one stupid mistake. Calm down.

Soft touch
Southgate described the pair as “naive” and said “they have got this wrong” but expressed the need to speak to them “in the appropriate way” and “not add to how difficult their situation is going to be”.

Quite how someone could look at those quotes and criticise the manager is a mystery. But David Hytner of The Guardian gives it a go.

He describes Southgate’s ‘tone’ as ‘curious’, and that he ‘appeared reluctant to criticise them’. That any decision to send them home ‘was imposed on him by the protocols’ and ‘he got the balance wrong…between supporting his players in public and calling them out’.

He literally said what they did was wrong. He has punished them by sending them home from international duty. He will likely not select them in his next squad. He will talk with them privately. But he also predicted the backlash they would face and opted not to pile on. Anyone can see that’s just good management.

What would Southgate gain from ‘calling them out’ in a press conference to journalists baying for such quotes? Are we really in a position where we need a 20-year-old and an 18-year-old to be chastised for everyone to see instead of spoken to discreetly?

Seemingly so. ‘Here, he needed to be harsh. The softer approach was not a good look,’ reads the final paragraph. Stone the sods next time, Gareth.

Silence treatment
The following headlines are all prominent on the Daily Mirror website:

Four different authors, too. Great minds and all that.

Recommended reading of the day
David Squires on the upcoming season.