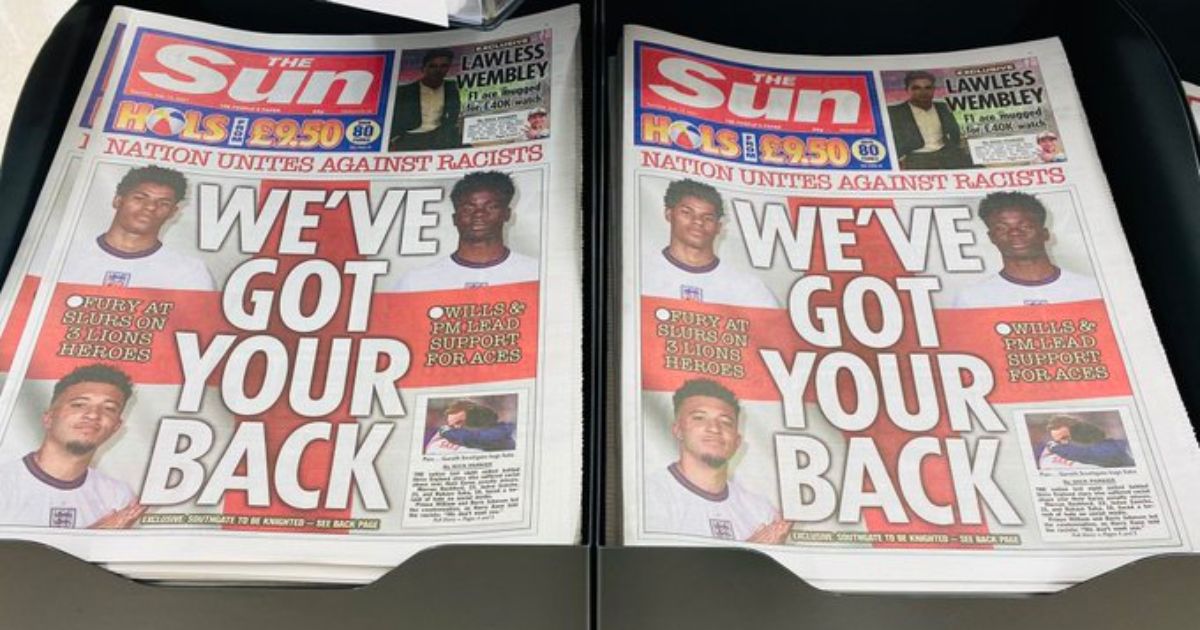 When The Sun prints three pictures of black men on their front page with the words ‘WE’VE GOT YOUR BACK’, we half-expect to see the image of a knife too. No black man would turn their back on The Sun for fear of a blade being plunged in to the hilt.

So if you are one of those black England footballers looking at that front page of The Sun, would you feel supported? Or would you feel patronised and used? Would you applaud the sentiment or would you be riled by the hypocrisy?

‘NATION UNITES AGAINST RACISTS’ is the key here because this is the moment when The Sun realised that they were on the wrong side. The nation – barring a minority of absolute c**ts – is united against racists and the one thing at which The Sun truly excels is reading the mood and backing the winners, whether that be a political party, a Big Brother contestant, Freedom Day or Brexit. But this should be side-eyed with the same suspicion as their switch to supporting Labour in 1997; this feels like rabid opportunism.

It’s less than five years since The Sun (along with the Daily Mail) were singled out by the European Commission against Racism and Intolerance for ‘fuelling prejudice’. Are we to believe they have had a change of heart over the last five years? Over the last five weeks?

The ‘WILLS & PM LEAD SUPPORT FOR ACES’ is also key here, as The Sun is firmly on Wills’ side in a largely imagined war with the twin evils of Harry and Meghan, while the PM is obviously the god of all things. Freedom Day and all that.

Never mind that this same PM has previously referred to African people as ‘piccaninnies’ with ‘watermelon smiles’, claiming that the problem with colonialism in Africa ‘is not that we were once in charge, but that we are not in charge any more’. Never mind all that because he has ‘led the condemnation’. Has he balls. Michael Heseltine once described Johnson as ‘a man who waits to see which way the crowd is running and then dashes in front and says ‘follow me’….’ and that perfectly illustrates this front page and his successful marriage to The Sun.

In an editorial on the inside pages, The Sun write that ‘the vile, knuckle-dragging racists who abused Marcus Rashford, Jadon Sancho and Bukayo Saka achieved one thing with their cowardly online abuse – they united our entire nation in disgust’. They describe the abusers as ‘racist pond life’ who are ‘idiotic relics of an ugly past’.

Yes and yes. And there is some truth to their contention that ‘social media giants’ should take some of the blame, but surely The Sun might want to take just a tiny share of the responsibility for some of the hatred towards our black footballers, considering the way they have treated the best of them over the last five years.

When you search ‘Raheem Sterling The Sun’. pic.twitter.com/KSPkDd4mG2

And that’s just the actual newspaper and ignores the The Sun’s Twitter feed, which has previously referred to Sterling as a ‘footie idiot’. And then there was this – perhaps the very worst example of the lot:

Let’s not forget this deleted tweet just after Euro 2016 either. Raheem Sterling had NOTHING to do with the story. pic.twitter.com/lhR7cb5HeL

But that’s okay because in December 2018 they insisted that their ‘coverage of his off-field behaviour has nothing to do with skin colour’. They continued: ‘The suggestion is ridiculous and offensive – and the idea it inspired racists is baseless. His media mates should engage their brains before dishing out accusations without a shred of evidence.’

But it’s notable that since December 2018, their criticism of Sterling has largely ceased. Not because the man himself is behaving any differently – he is presumably still spending too little or too much on a daily basis – but because The Sun were called out, not only by Sterling’s ‘media mates’ but presumably by some inside The Sun themselves, with football writers particularly uncomfortable with this repeated vilification. If it was ‘nothing to do with skin colour’, why have they stopped after that ‘ridiculous and offensive’ suggestion?

So when Sterling – or Marcus Rashford, or Jadon Sancho or Bukayo Saka – sees a Sun front page saying ‘WE’GOT YOUR BACK’, we imagine there might be rather more inclined to say ‘f*** you’ than ‘thank you’.

Recommended reading of the day
Barney Ronay on England’s problems

Miguel Delaney on the shame of England