Home Mediawatch The Timo Werner transfer update everyone was waiting for… 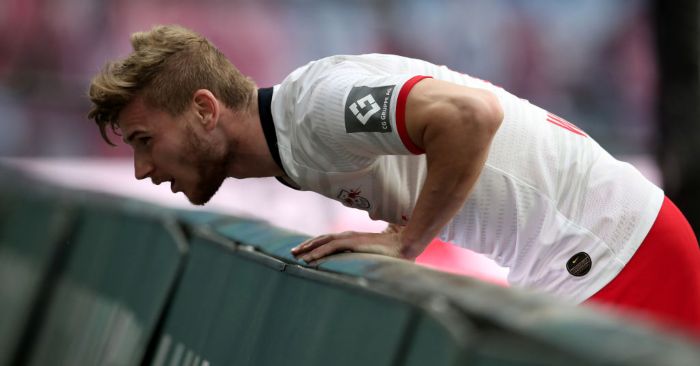 Timo’s up
Quite what compelled Sky Sports to publish a story on Wednesday with a headline of ‘Timo Werner: Liverpool, Chelsea and Manchester United have 12 days to buy forward for less than £50m’ is unknown. And by unknown, Mediawatch definitely means that they obviously did it to hoover up some search traffic.

You see, that is not an update. Not in any sense. It is common knowledge that Werner’s Leipzig release clause expires on June 15. That has been known since March 31 at the latest when Sport Bild reported as such. So are we now to expect a Thursday update of ‘Timo Werner: Liverpool, Chelsea and Manchester United have 11 days to buy forward for less than £50m’, followed by a daily countdown with no extra information thereafter?

Kaveh Solhekol does add some vague bits about how ‘it had been assumed’ (by who is not made clear) Leipzig might sell Werner for less than his release clause after it expires, but that PSG signing the older Mauro Icardi for £51m means that is now ‘unlikely’.

When you move past the fact that was literally never going to happen – why would Leipzig sell a 24-year-old with three years remaining on his contract for considerably less than he is valued at? – you start to wonder what the whole point of all this was.

Then you remember: Google.

Werner Bros
That much is made clear by the following rehashes:

‘Liverpool, Chelsea and Manchester United have 12 DAYS to sign Timo Werner for under £50m from RB Leipzig’ – talkSPORT.

It turns out you can manufacture news out of literally nothing. Especially if that news is about someone in the, erm, news.

UPDATE: There was another big Timo Werner revelation on Thursday

Charity case
‘Premier League players from all 20 clubs have donated signed shirts to be won in a raffle organised by the #PlayersTogether campaign, raising money for NHS charities.

‘The Shirts for Heroes raffle will take place on Wednesday, June 3, from 7pm, when supporters will have the chance to win a signed shirt from a choice of 500 top flight stars for £5 per entry on Ebay UK.

‘All proceeds will go directly to NHS Charities Together, the national membership organisation for NHS Charities, representing more than 200 member charities’ – Sky Sports.

It’s almost as if calling the #PlayersTogether initiative ‘laughable’ and suggesting they ‘didn’t want to help in the first place and hid behind the smokescreen of giving just one per cent of their wages’ was always utter b*llocks. Simon Jordan will presumably be filing a grovelling apology in this week’s Sun column.

Come deign with me
Except no, he won’t. Rather, he will take aim once more at those who have ‘deigned to return after contributing nothing to the financial challenges created by their salaries, with some even refusing to attend non-contact training, breaking curfews more times than Dominic Cummings and at times dismissing the nation’s morale’.

And do forgive Troy Deeney for ‘refusing to attend non-contact training’ because he felt pertinent questions about safety during a global pandemic that causes respiratory problems had not been answered at a time that his new-born son was suffering breathing difficulties. So too N’Golo Kante, who has had recent bereavements in his close family and once fainted after training.

Mediawatch understands and sympathises with Jordan’s eventual point about the fate of clubs in League One and Two. But that is an argument that someone can and should be able to make without lazily targeting Premier League footballers.

You got to know when to hold ’em, know when to Foden
‘Phil Foden appeared to break social-distancing rules when he enjoyed a kickabout on the beach.

‘The Manchester City star got stuck in after he challenged members of the public to a match on Merseyside at the weekend.

‘Video footage shows the England Under-21 ace within touching distance of his opponents.

‘The 20-year-old showed off his skills as he ran rings around the group of lads at Formby Beach.

‘Foden even grinned as he posed for a picture alongside four of them.’

Strange that there is no mention of City reminding him of his responsibilities, mind.

Why does it sound like The Sun aren’t taking a case of someone ‘appearing to break social-distancing rules’ (when was ‘appeared to break’ ever considered a synonym for ‘was definitely breaking’?) as seriously as they would with, say, Jack Grealish or Serge Aurier?

Blog’s dinner
Question: is a picture of Kylian Mbappe top of the Liverpool Echo website?

Follow-up question: is the story a ‘Liverpool news and transfers LIVE’ blog?

Final question: is the ‘big advantage’ the Reds apparently hold in the Mbappe ‘chase’ based solely on quotes from Willy Sagnol?

Answers on a postcard, please. But in unrelated news, it is 207 days since Jurgen Klopp apologised for “killing that story”.

Miguel Delaney on Richard Masters and the Premier League.