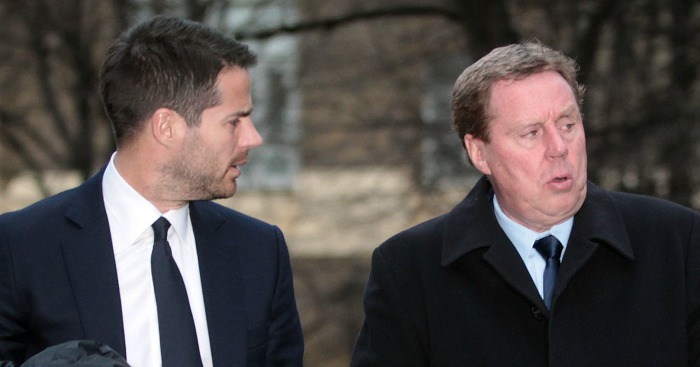 Acewatch
Among the ‘PREM ACES’ that were turned away from a nightclub despite being ‘title-chasing footballers’ – according to the Daily Star’s front page – was Ben Hamer, last seen on loan at Bristol City.

England for the English
There is a great deal of joy to be found in Harry Redknapp’s latest Daily Telegraph column. Not least this line on Jamie Vardy…

‘Vardy has also been fantastic but is he a sexy enough name for one of the Big Five? They will probably go for someone from Spain, Uruguay or Argentina who we’ve never heard of.’

We can only presume from this sentence that Redknapp had ‘never heard of’ Alexis Sanchez, Diego Costa, Fernando Torres, Luis Suarez, Sergio Aguero and all those other nobodies signed by the Big Five from Spain, Uruguay or Argentina. Let’s face it, they’re no Jermain ‘top, top, top’ Defoe.

Hard times
Of course, Redknapp has not finished:

‘Leicester’s success also underlines how important recruitment is and that players in England cannot be overlooked. So many of these players, such as Vardy and Danny Drinkwater, have had to work their way up and probably suffered many knockbacks over the years.’

Probably? Is that good enough now? Danny Drinkwater actually joined Leicester directly from Manchester United, where he had been at their academy since the age of nine, the poor b***ard.

Oh and of the eight players signed by Leicester this season, only two were bought from English clubs. And only one of those was English. But yes, their success definitely underlines that players in England cannot be overlooked.

Who’s winning the title this week, Harry?
Harry Redknapp, January 4: ‘Leicester have had the most successful season of the lot up to this point when you think they were tipped to go down in August, but they will probably start to fall away and I’ve put them down to finish sixth.’

Harry Redknapp, February 28: ‘Leicester City and Tottenham are now rightly the title favourites and this felt like a potentially pivotal weekend.’

Harry Redknapp, March 1: “Tottenham have got it all on, going to Upton Park under the lights, with a tough crowd. But if Tottenham come through that they win the league I think.”

Harry Redknapp, March 6: ‘Leicester are virtually guaranteed Champions League football next season, a stunning achievement in itself, and I cannot see them slipping up for the league. It will take a massive collapse for them now but looking at their fixtures, and the games for the teams around them, they will win the league.

‘Everyone has been waiting for them to slip up but it just hasn’t happened. Every month you look at the fixtures and try to pinpoint one they could lose and they keep upsetting the odds. That win over Spurs at White Hart Lane in January now looks pivotal.’

Yes, it now looks pivotal. It didn’t look so bloody pivotal last week, did it, Harry?

Ranieri is a nice guy, but he’s done well to get the Leicester job. After what happened with Greece, am surprised he can walk back into PL

Harry Redknapp, March 7: ‘Whatever happens over the final nine games of the season he has been the manager of the year.’

When I was brilliant, by Harry Redknapp
Of course Redknapp cannot credit Claudio Ranieri without shovelling a bucketful of praise towards good old Englishman Nigel Pearson.

He says: ‘Pearson’s departure in the summer could have threatened to set them back and out of the 12 managers or so who were linked with the job, Ranieri was the one nobody expected. He could easily have come in and messed it all up, changed the style of play and said ‘no, we’re not going to do it like that’.

‘I’ve gone in at teams down at the bottom of the league and you’ve had to change things quickly to get a reaction and freshen the place up. But Leicester already had decent players and it reminds me of when I went in at Tottenham.

‘At Spurs we already had Gareth Bale, Luka Modric and Michael Dawson and it didn’t need much work doing on the squad. They just needed some direction and someone to believe in them.

‘Leicester also had a strong core in the squad, adding just a couple of new players like N’Golo Kante and Shinji Okazaki over the summer. It’s not as if Ranieri was taking over a bunch of idiots.’

And Modric just needed direction? Like telling him that “it’s difficult for him to play as one of two central midfielders, he’s got to play further forward”? Like preferring Jermaine Jenas and Wilson Palacios in central midfield and pushing Modric onto the left wing? Mediawatch is astonished that Zinedine Zidane has not tried the same tactic at Real Madrid.

Like father, like son
In a ridiculous Daily Mail column that suggests that every Leicester player should make it into a team of the year, Jamie Redknapp ‘writes’ the following:

‘Mahrez again proved his quality with an exceptional goal at Watford and I think the best playets are the ones who perform away from home.

‘Mahrez looks like he’d be more suited to playing with the comforts of home but some of his best displays have come on the road – at Watford, Man City, Everton. He is the perfect exponent of counter-attacking football.’

So he is the perfect exponent of counter-attacking football – traditionally a tactic utilised away from home – but he looks like he’d be more suited to playing with the comforts of home. What on earth could he mean?

The Alamo
Congratulations to Garth Crooks of the BBC. Unable to think of an outstanding performance from a right-back this weekend for his team of the week (could we humbly suggest Hector Bellerin, DeAndre Yedlin or Craig Dawson?), he simply does not pick one. So a back three of Charlie Daniels, Dejan Lovren and Virgil van Dijk must hold the fort behind Aaron Ramsey, Gylfi Sigurdsson, Dimitri Payet, David Silva (‘like John Curry on ice’), Riyad Mahrez, Harry Kane and Josh King. Good luck fellas. You really don’t see enough 3-2-3-2 formations with no holding midfielders.

Knowing me, knowing you
Oh my. The Sun really are setting their man up for a fall when they dub Paul Jiggins their ‘north London know-it-all’. We are expecting big things as he ‘poses the big questions facing Tottenham and Arsenal as they battle for title glory’. Come on then, know-it-all…

‘WHAT MUST THEY DO IN THE RUN-IN?’ asks Jiggins. And this, ladies and gentlemen, is his answer in full …

‘POCHETTINO will know his side cannot continue giving teams a one-goal head start. And they must ensure they turn superior possession into goals and kill off opponents when on top.

‘Arsenal must cut out the poor discipline and defensive howlers that have cost them vital points this season.

‘It was classic Arsenal at the Lane — seemingly in control before suffering another self-inflicted wound.

‘Wenger yet again talked about “regrets” after the game, but the stubborn Frenchman still tried to gloss over his side’s familiar failings.

‘He said: “It’s part of the top level, to keep control and not make a mistake at a decisive moment.

‘“But I wouldn’t make too much of a fuss about that because it would take away the fact we performed well.”

‘You did, Arsene, but you still did not get the three points!’

So thanks to Jiggins’ expertise, we discover that Tottenham need to stop conceding goals and start scoring more. And Arsenal need to stop having players sent off.

The Sun’s resident comedy Cockney may indeed know it all; he’s just chosen to keep most of it to himself.

Finishing line
The Sun put together a Rashford v Berahino comparison for reasons unknown, with marks out of five for pace, aerial threat, attitude and finishing.

Graeme Bryce awards them both 4/5 for ‘finishing’ despite the fact that they failed to hit the target with any of their four shots in total. What the hell mark would actual goalscorer Salomon Rondon have got?

A difference of opinion
Garth Crooks, the BBC: ‘I had a big problem with referee Andre Marriner’s decision to award Christian Benteke a penalty when Marriner looked unsure. I have no problem with the referee’s opinion, I just think we are all entitled for the referee to be sure.’

Mediawatch is siding with the actual, you know, referee. Especially when he is ably assisted by his – and this is a key word – assistant.

Thanks to today’s Mediawatch spotter Richard Andrews. If you see anything that belongs on this page, mail us at theeditor@football365.com, putting ‘Mediawatch’ in the subject field.