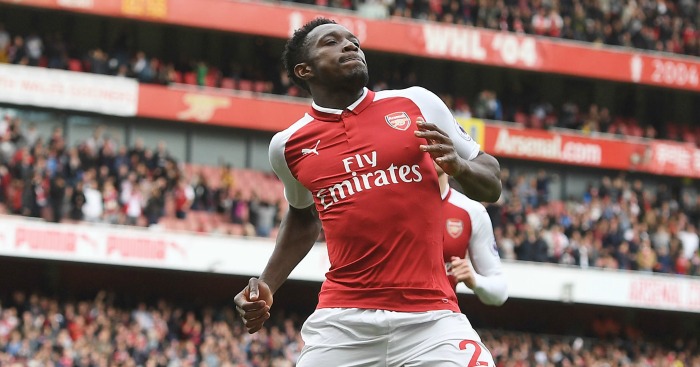 Grumpy old man
Where else could Mediawatch start this miserable Monday than with Garth Crooks and his BBC Team of the Week? It should be an inherently positive concept and yet Crooks has three people in his sights this week for a pasting: Chris Hughton, Paul Pogba and Danny Welbeck.

Now you may be thinking that Brighton manager Hughton has just won his first Premier League game of the season, that Pogba has arguably been the Premier League player of the season so far and that Danny Welbeck scored two goals on Saturday so should probably be immune to criticism this week at least, but you would be a) an utter fool and b) unfamiliar with Crooks’ propensity to be the grumpiest of grumpy old men.

According to Crooks, who also bizarrely praised Benjamin Mendy for putting in a cross ‘like a boomerang’ (isn’t the defining characteristic of a boomerang that it, you know, comes back?), now is not the time to praise Hughton but to criticise him…

‘I heard Brighton boss Chris Hughton say on Football Focus this weekend how he was realistic enough to accept that he is in a different league to quite a number of teams in the Premier League.

‘Well, the reality is he is in the same league whether he likes it or not and he had better tell his owners the truth – Brighton will not survive the season unless they buy in the January transfer window, having failed to make an impact in August.

‘Make no mistake, Brighton’s victory over West Brom was a fantastic effort, particularly under the circumstances. But don’t be fooled, this Brighton side is not good enough to survive in its current state. Gross’ brilliant two-goal performance against the Baggies is merely papering over the cracks.

‘Even Tony Pulis, who is normally very protective of his players in public, had to come clean and criticise their attitude after the game. Brighton cannot survive on the occasional charitable offer from teams who can’t be bothered and that’s what West Brom’s performance amounted to.

‘Other teams, even in the league Hughton and his owners think they are in, won’t be offering such lame performances as West Brom in the future.’

So, yes, well done Chris (and Pascal Gross, because it is he who actually makes the TOTW), but not well done at all because West Brom gift-wrapped you the win and you need to wise up, sucker.

Bizarrely for a team that ‘couldn’t be bothered’, West Brom ran more miles than any other Premier League side this weekend. But don’t let that distract you from the terrible job being done by Hughton.

And so on to Pogba, who does not make Crooks’ TOTW, but why else would you pick Stoke’s Eric Maxim Choupo-Moting but to have a massive pop at British football’s most expensive player?

‘I also want to discuss Paul Pogba’s new hairstyle, which features a red streak. I only mention it because he clearly wants to bring it to our attention. There is so much for the midfielder to do at United and he still insists on behaving like an adolescent.

‘Granted, a hairstyle is not going to determine how well he can control a ball or make a pass, but it does say something about where his mind is at the moment. If you are going to attract attention to yourself on a football pitch do it with goals and performances, not cheap gimmicks and marketing tricks.’

Wow. Just wow. So you admit that ‘a hairstyle is not going to determine how well he can control a ball or make a pass’ but somehow suggest that a player with an eye-catching hairstyle cannot possibly concentrate on football. Because of course David Beckham and Cristiano Ronaldo were famously sh*t.

As for ‘attracting attention with goals and performances’, Pogba might well point to a record of two goals and two assists in four Premier League games so far this season. And then point to an old man stuck in the early 80s and p*** himself laughing.

But possibly even more ridiculous is Crooks’ criticism of Welbeck, for basically not being as brilliant as Thierry Henry despite scoring two goals to help Arsenal beat Bournemouth 3-0. Not sodding good enough, Danny.

‘When Danny Welbeck scored his first goal in Arsenal’s 3-0 win over Bournemouth on Saturday, my first thought was that it came off his shoulder.

‘The number of times I have seen Welbeck score goals that aren’t clean connections makes me wonder, is he what you would call ‘a genuine finisher’ in the same way you would categorise other Arsenal forwards like Ian Wright, Dennis Bergkamp or Thierry Henry? Not in my opinion. But does that matter when you are a very willing athlete who will score goals provided he remains fit and healthy?

‘So what, you might say. When the ball ends up in the back of the net, who cares how it got there? Well genuine finishers do.

‘I was so impressed when Welbeck scored his second and when he almost got a third with the most exquisite chip. But even if he had scored that attempted effort, my opinion of him would not have changed.

‘The difference is that I’ve seen Wright, Bergkamp and Henry all score goals like the one Welbeck went for and missed with remarkable regularity.

‘Arsenal might have brushed aside Bournemouth but until the Gunners have genuine finishers in the team they can forget about Premier League titles.’

Cheap, smooth gloss
Think Arsenal deserve at least some credit for winning 3-0 at home? You would be wrong.

‘Defeat for the home side would have meant Arsenal’s worst league start in 35 years. Even the ‘Wenger In’ camp have started to become the ‘Wenger Not So Sure’ camp.

‘This result was more like a cheap, smooth gloss slathered by Wenger over Arsenal’s flaws that will begin to dry and crack in the coming weeks.’

Mediawatch double-checked and Arsenal did in fact win.

How can I even try to go on?
‘JURGEN KLOPP will send an SOS to Philippe Coutinho this week,’ writes Martin Blackburn on the back page of The Sun.

Will it be in Morse code? Or sent as a message in a bottle?

There are easier ways of telling Philippe Coutinho he will probably be on the bench for the Sevilla game.

A first look at Monday's back page pic.twitter.com/4yzy0U0xCR

The back page of The Sun urges us to ‘SPOT THE DIFFERENCE’ between the challenge of Sadio Mane on Ederson and Matt Ritchie on Alfie Mawson on Sunday and judged the decision to send off one and not the other as ‘FARCICAL’.

SPOT THE DIFFERENCE? Well, let’s turn to page 49 and the refereeing expert Mark Halsey who is employed by The Sun…

‘THERE is a difference between Sadio Mane’s red card and the yellow card showed to Newcastle’s Matt Ritchie yesterday.’

Halsey then goes on to explain that one man (Mane) kicked another man in the head and the other (Ritchie) ‘clipped the arm’ of somebody. Which seems reasonable. But reasonable does not a back-page lead make.

PFM
It is important to remember here that Ederson did in fact get kicked in the head, was stretchered from the pitch in considerable pain and then received several stitches.

Remember all that as you read what Tony Gale said on Sky Sports News on Monday morning.

“Interesting the reaction from the keeper…down for five minutes. Tom Heaton at the weekend dislocated his shoulder and he’s waving to the crowd. Tom…proper man.”

‘ANY professional footballer, or former footballer who says he thinks Sadio Mane deserved a red card is a liar.’

That’s right. If you have a different opinion to Chris Sutton, you are a liar, because Chris Sutton knows what you actually believe better than you know yourself.

He’s looking at you Rio Ferdinand and Jamie Carragher. Liars.

Opening paragraph of the day
‘ANTONIO CONTE declared it Hokey Cokey month as he dips his players in and out of a hectic run of fixtures’ – The Sun.

Recommended reading of the day
Andy Brassell on Julian Nagelsmann