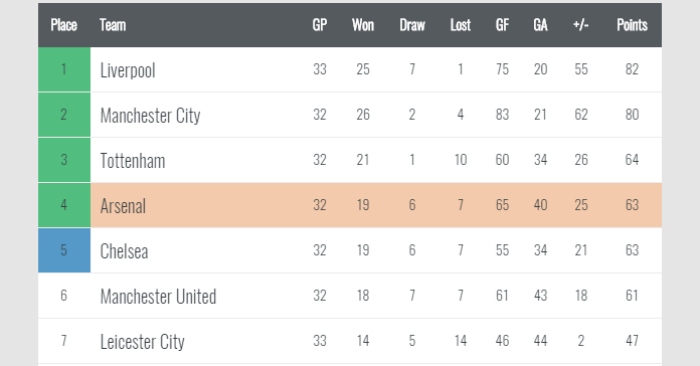 Baffled
‘ARSENAL manager Unai Emery made the baffling claim that his side are in good shape despite a desperately poor display in a 1-0 defeat at Everton which threw their top-four hopes into doubt’ – Ian Herbert, Daily Mail.

Well done, Ian, because you have accurately summed up in one sentence the problem with the narrative-led nature of modern journalism.

Apparently it’s now ‘baffling’ that a manager does not lose his sh*t over one poor performance and result despite the fact that:

b) In 2019, they have picked up as many points per game as top-of-the-table Liverpool.

c) Everton now have the best home record outside of the top six.

d) Arsenal were missing their best centre-half, their first-choice right-back and their two first-choice central midfielders.

e) Arsenal are actually still fourth. And we have now checked that several times after that ridiculous back page.

Maybe, just maybe, Emery’s memory recalls something beyond those 90 minutes.

Never Gunner give you up…
Inside the Daily Mail, Dominic King is adding to the noise. The problem with being the Merseyside correspondent and so only actually watching Arsenal twice a season, is that you can overreact to one or two performances and entirely miss the arc of a whole season. Or at least you can if you are lazy.

‘If this was an exercise in not letting your guard down in public, Emery succeeded. The shutters were up when he faced the media. Inside, the Arsenal boss must have been boiling as his consistently inconsistent team faltered yet again under pressure.’

‘Faltered yet again’? They have now lost two of ten Premier League games. In that spell they have beaten Chelsea and Manchester United and drawn with Tottenham away from home. Their only two defeats in those ten games have come at Manchester City – the best team in the country – and now Everton. But still, why let that get in the way of the usual ‘flakey Arsenal’ trope?

‘Embarrassed is not overstating it. How can Arsenal, the only side in the top four divisions this season without an away clean sheet (they’re not – MW), qualify for the Champions League playing like this?’

Erm, because this was one game of 38. After after 32 games, the table suggests they are the fourth best in the country. Thankfully, the table is decided on ‘points’ and not ‘the perception of Dominic King of the Daily Mail’.

‘Arsenal, by contrast, continue to look vulnerable and it is remarkable they are still in the top four conversation.’

The ‘conversation’? They are in the actual top four. Because – and this is vitally important – all of the games count, not just those played on Merseyside.

Lies, damned lies…
Over at Mail Online, the theme continues with this headline:

Vernacular of the day
The Daily Mirror tell us that Unai Emery ‘refused to hit the panic button’ after the defeat to Everton.

Has anybody ever actually agreed to hit the panic button?

Curiouser and curiouser
‘To be fair to Ozil, he was hardly helped by Emery’s curious team selection which saw Mohamed Elneny replacing Aaron Ramsey in midfield and Pierre-Emerick Aubameyang also benched’ – Mark Irwin, The Sun.

Small-time Crooks
‘In my day, goalkeepers picked the ball up when it was in the box. Ederson plays the game like a defender and only uses his hands as a last resort. I must say he was quite brilliant but I sometimes think: What is the game coming to?’

Does somebody want to break it to Garth about the back-pass rule? And if you are volunteering for that particular job, you might also want to tell him, after this week’s Team of the Week on the BBC:

2) James Milner, in a Team of the Week at left-back, barely played half an hour. At sodding right-back.

Mail us at theeditor@football365.com with ‘Crooks envoy’ in the subject line if you fancy the job.

Second mention of the week

The Daily Star are here with both a phenomenal @secondmentions for James Maddison and an accusation of attempted murder against Claude Puel. pic.twitter.com/FYQ5bOXq1q