Home Mediawatch Mediawatch: When does a discussion become a ‘squabble’? 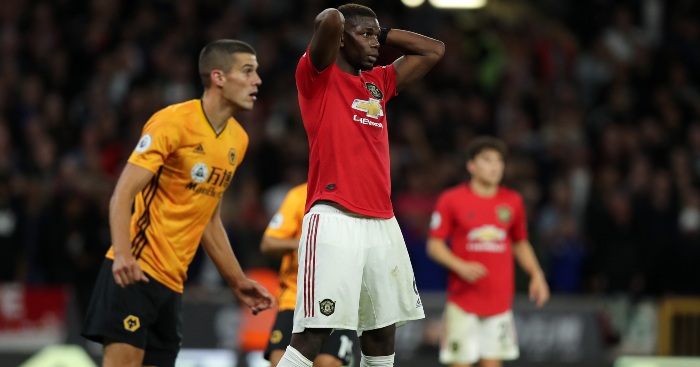 No more drama
On Monday night at Molineux, Paul Pogba took and missed a penalty after a very short conversation with Marcus Rashford which ended with the Englishman tossing the Frenchman the ball.

Rashford then said after the game that “Paul wanted to take it, it’s that simple,” and “I took one last week, so it is no problem for me”. It’s almost like he does not have the slightest problem.

You know what absolutely did not happen?

A ‘disagreement’ or an ‘on-pitch squabble’ (The Sun) or a ‘debacle’ (Daily Mirror).

And there were definitely no ‘Oscar-winning theatrics and dramatics’ or ‘bickering’ as described by Paul Ince in his Paddy Power column.

The word you’re all looking for is ‘discussion’. They are grown men.

Ideas time
At what point did ‘how different were things in 1990 when Liverpool last won the title?’ feel like a good idea to somebody at MailOnline?

It was ‘a world in which the internet was still just an idea’. Blows your mind, right?

Massive nonsense
And if there was no internet there would be no football.london and no shameless attempts to pick up clicks from Google and Newsnow with headlines like this…

‘Liverpool and Jurgen Klopp get massive injury boost ahead of Arsenal visit.’

Massive? It’s Dejan sodding Lovren. He has started four games for Liverpool in 2019 and could yet leave the club on loan.

If you’re writing by the tenth paragraph that ‘despite returning to training, it remains to be seen if Lovren is included in the Liverpool matchday squad on Saturday’, then hang your head in shame for using the words ‘massive injury boost’ in the headline.

You’ll never read alone
The current trend for club-specific journalism is basically to issue propaganda. The message: ‘Don’t we all support a wonderful club and how wonderful are you for choosing this wonderful club?’.

And never is that more true than with Liverpool coverage, with Reds fans left in no doubt that this really does mean more. What a club! What a manager! What players! What a song! What a stadium! What a colour!

The Liverpool Echo are quite rightly at the forefront of this red propaganda push. Which is how you end up with pieces detailing ‘why Mohamed Salah comments show Jurgen Klopp has stayed true to Liverpool vow’.

Apparently, ‘signs are incredibly promising that Klopp has delivered on his promise with just four simple words uttered by global superstar Mohamed Salah’. And that promise was to make Liverpool a ‘final destination’ for great players instead of a stepping stone.

And now Salah has said that “I’m happy at Liverpool”, it is absolutely clear that nobody need ever leave Liverpool again. Huzzah. They really are brilliant.

Thankfully, nobody has ever previously said rather more than four words about being happy at Liverpool…

“It’s nice because when you extend your contract, you extend it because you want to stay here for the future.

“I signed not only for two-and-a-half more years, but I signed for a long time to stay here and I am so happy.

“When you are happy, you try everything for the best for the future. I spoke a lot with my family because my family are very important to me and they are happy here.

…and then left for Barcelona six months later.

“I’m always happy. But now it’s important to concentrate on the national team. At the moment I am very happy with my life.”

…and then left for Barcelona two months later.

Thankfully that never happens, and Salah saying he is happy at Liverpool is a sign that ‘Klopp has pulled off his aim to make Liverpool an attractive final destination for bona fide Ballon D’Or contenders’. Definitely.

Say what?
Can you spot the Daily Star website’s preferred tactic for selling stories that are largely a bit sh*t?

Does it work? Are you intrigued? Should we wait here while you go and find out? We simply cannot take that risk so a) he’s fit, b) he’s sorry and c) he’s embarrassed.

Ahead of their clash on Saturday evening, live on Sky Sports, Kevin Nolan has selected his current Liverpool v Arsenal combined XI…

Who needs to be in there?

Idiot of the day
This.

Rory Smith on a load of different stuff. Who cares? He’s brilliant.