Home Mediawatch Mediawatch: When Mesut Ozil is bigger than an Arsenal win 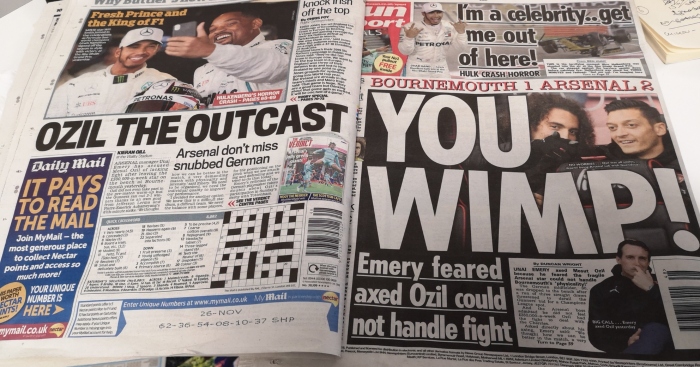 C-c-c-c-called a u-turn
‘Man Utd fans should focus on the positives and not compare themselves to this phenomenal City team’ urged Neil Custis on Thursday on The Sun website.

Mourinho lickspittle Custis wrote about an ‘upturn in form’ and then again about an ‘upturn in results and form’ before insisting that ‘the club needs to allow Jose Mourinho to build on what he has achieved so far. And his two seasons have been an achievement’.

‘To find a new manager, seek a new way and bow to an increasing social media dissatisfaction with what is happening at Old Trafford, would put United further back.

‘They are eighth right now, but the evidence pre-City suggest they are not going to stay there.’

Well Custis was absolutely bang on there; after their 0-0 draw against Crystal Palace, they are now seventh.

You would think he might be pleased. After all, he had been urging United fans to ‘focus on the positives’. Surely he would not allow one 0-0 draw with Palace to spoil that message…

‘They can raise themselves to beat Juventus away, but lowly Palace at home? Nah, that will take care of itself.

And so very surprising after that ‘upturn in results and form’.

‘To long-time watchers it was not unexpected.’

But we thought that Mourinho’s first two seasons have been an ‘achievement’ only bettered by Manchester City (and Chelsea)?

‘This is what we have come to expect. It is the post-Ferguson United.

‘A very average team who no longer have the passion to match the history of an incredible football club.’

‘Sir Alex always used to say that at United you do not go chasing the money or big contracts because they will find you based on what you do for the club.

‘Unfortunately nowadays the rewards come before they are actually earned.

‘It is shameful. Shameful.’

Oh dear. Can somebody please check he is okay?

‘The problem is hope is starting to fade.’

Just remember how everything looked so sunny on Thursday and hold onto that thought, Neil. You are special. You are worthy. You are loved (by somebody, surely).

Apathy in the UK
The Daily Mail‘s Chris Wheeler writes on Monday that Manchester United players are ‘said to have grown weary of Mourinho’s verbal grenades’. He writes that ‘some of them are understood to be angry at his latest remarks but most were described as apathetic last night’.

Can you apathetically ‘turn on’ somebody?

What a fine Mes
Of course, Manchester United’s draw with Crystal Palace was not the big story by Monday morning. That was of course Arsenal’s humiliation at Bournemouth.

Tomorrow’s @SunSport back page: Unai Emery dropped Mesut Ozil for Bournemouth because he couldn’t cope with their physicality https://t.co/XnU79st7cw pic.twitter.com/hH1Lcwiksq

Wait a minute, that does actually say BOURNEMOUTH 1 ARSENAL 2 so the Gunners obviously won, stretching their unbeaten record to 17 games. Which is pretty bloody impressive.

But why focus on that when you can make it all about Mesut Ozil? Who – and this is quite important – DID NOT PLAY IN THE MATCH.

So what did Emery say?

“We thought how we can be better in the match, a very demanding match with physicality and intensity and then we decided.”

So he decided – brilliantly, it turns out – to switch to a 3-4-2-1 formation against Bournemouth to combat their intensity, and you still try to make it all about Mesut bloody Ozil. Obsessed much?

Obviously, the mistake Emery – who does not speak fluent English – made was to use the word “physicality”, leading The Sun’s Duncan Wright to write this ridiculous paragraph:

‘Ozil, 5ft 10in, did not even warm up as it became clear he would not be risked against a Cherries midfield that included 5ft 4in Ryan Fraser and 5ft 8in David Brooks.’

Because of course physicality is measured entirely in inches. Just like dicks.

The Accused
The Daily Mail dedicate their own back page to the same story, claiming that ‘Unai Emery has accused Mesut Ozil of lacking fight’. Which is of course one way of saying that a winning manager was asked why he omitted a certain player from his (winning) line-up and explained in tactical terms that he wanted to include players like Alex Iwobi who excel in physical, intense matches.

Don’t be surprised if he refuses to answer the question next time.

Stat’s the truth
The Mail double up on the story, commissioning one of their online bods to write that ‘Arsenal score almost TWICE as many goals without £300,000-a-week Mesut Ozil on the pitch… Unai Emery may have been right to leave him out for Bournemouth clash’.

Also, comparing ten games Ozil has played with a sample of three games that Ozil has missed this season is pure science and absolutely cannot be questioned.

Oh, wait a minute; it really can.

For the record, 3.3 goals per game is not really ‘almost TWICE’ 1.8 goals per game. And the fact that Mesut Ozil missed games against West Ham, Fulham and Bournemouth and played against Manchester City, Chelsea and Liverpool might be just a little bit relevant.

‘This season’s stats show Arsenal are performing more efficiently in the Premier League without Ozil.’

Research for a hero…
‘It’s no coincidence that Tottenham’s best performance of the season came with Harry Kane, Dele Alli and Christian Eriksen all in the team. The superb win over Chelsea was the first time those three have started together in the Premier League since September’ – Jamie Redknapp, Daily Mail.

Pesky fact: The last time they all started together in September saw Tottenham lose to Watford.

‘It did not take long for Claudio Ranieri to work out that to get the best from Fulham, you have to play Ryan Sessegnon wide on the left. He should not be stuck at left-back and forced to defend – Jamie Redknapp, Daily Mail.

Jonathan Wilson on the same thing. Such hipsters.

Daniel Storey on Wolves and pride coming before a fall